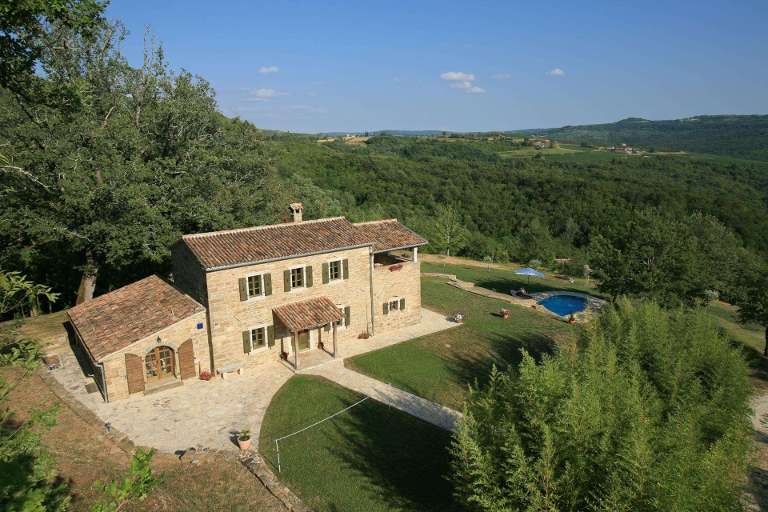 From the Mirna river valley, dense in oak forest and a rich source of prized Istrian truffles, we followed a quiet country lane, gently winding its way uphill towards the emblematic medieval hilltop village of Grožnjan. Nestling on the wooded slopes with glorious views back across the verdant valley, we came across Bolara one of the prettiest stone built cottages we have discovered and a perfect hideaway for honeymooners and couples.

Lovingly restored, this ancient farmer's cottage contains a wealth of characterful, authentic details such as open-faced walls, a large in-built stone fireplace, internal arches and solid wood cross beams. Cooling quarry tiles have been laid downstairs and wooden flooring in the bedroom. The effect is a property of immense atmosphere where privacy, peace and back to nature tranquillity are all assured.

As you may discern from the accompanying photographs, Bolara is also one of the most incredibly spacious properties for two that we have come across. Originally conceived as a two bedroom property the owner decided that he liked the space so much he would leave it as a one bedroom house and maybe, one day, add another bedroom... or maybe not. He'll see how he feels!

The upstairs bedroom in particular has a large en suite shower room with an imposing, solid king size bed and a generous covered terrace overlooking the grounds and that magnificent sweeping swathe of lush countryside. The private pool is also a very good size and sits in a sunny position surrounded by lawn and sun terracing.

You may find little reason to leave this calming pastoral oasis but a foray to the coast and around the immediate area is well worthwhile. Grožnjan (7km), for example, is home to a couple of restaurants, a mini market and two café/bars as well as stunning views, delightful architecture and a wealth of galleries and craft shops selling artwork, jewellery and ceramics.

Further supermarkets and various seafront restaurants are found between Novigrad and Umag (30 mins) together with beautiful, clear water pebble beaches such as Mareda and Dajla.

Great Things to Do Near Bolara

Pay a Visit to the Gradski Muzej (Town Museum) at Umag

The Castle of Sipar

Follow the coast road north from Umag where, between the small villages of Katoro and Zambratija, there is a tiny peninsula (sometimes an islet depending on the tides!) which exhibits the ruins of an ancient fort, the Castle of Sipar. Archaeological finds in the vicinity tell of the town’s existence as far back as Roman times. Sadly, some remains have been discovered out to sea confirming the gradual sinking of the coast.

Pay a visit to Savudrija on the far northwest coast of Istria. Here you will see the tallest lighthouse on the Adriatic. Built in 1818, it has been beautifully preserved and is still in operation. The locals also maintain an old tradition of keeping their fishing boats hung on wooden constructions on the beach.

You can do this at the Jama Baredine (Baredine Cave), found just north of Nova Vas, halfway between Visnjan and Porec. Declared a natural park in the 1980’s, it has been open to the public since 1995. Formed over thousands of years, it’s a treasure chest of stalagmites and stalactites, spread over 5 caverns with underground lakes. The less adventurous can take the 40 minute escorted tour, followed by a coffee on the terrace or a picnic in the grounds. (Tel. 052 421 333 and open 1000–1600).

specifically the stretch between the villages of Gracišce and Pican. From these two vantage points, absorb the unique panorama of the valley from which Mount Ucka, the highest peak in Istria, rises (to 1,396 metres).

Wander around its largely deserted lanes and look for the Romanesque gates set in the town walls and, just inside, its loggia dating from 1549. Nearby is the church of Sveta Marija, a square structure with portico and belltower and frescoed walls inside. Notable amongst the other churches is that of Sveta Eufemija with its 14th century crucifix, though largely rebuilt in the 1500’s. Look for the Masonic headstones with their ‘secret’ symbols some, intriguingly, with British names.

The little walled town of Pican

was a bishop’s see from the 5th to the 18th century and, at the time, Istria's smallest diocese. It has well preserved town gates dating from the 14th century and boasts some lovely medieval buildings.

Featuring archaeological, historical and ethnographical items from the entire Buzet region. (Tel. 052 662 792, check for opening days/times). Incidentally, there are two market days each month: the first Friday and the third Thursday.

Hum – The Smallest Town in the World

Head east towards the Ucka Mountains to the town of Hum, a fine example of a small medieval town situated on a ridge dominating the surrounding landscape. It has town walls and gate, a loggia and a parish church. Legend suggests that some building materials were left over after a project of town building in the Mirna Valley, enough to create a miniature town, hence Hum was born.

Driving Around Istria, Look for the Kažun,

a round beehive-shaped field hut built using the dry-stone technique, without any mortar or concrete. The material for this was usually collected by cleaning fields of excess pieces of stone. Farmers and peasants used them for shelter and for guarding vineyards or olive groves as well as for storage of agricultural implements. The kažun has become emblematic of traditional Istria and can be found all over the region these days, however they were traditionally prevalent more in the south and west.

Here you will be rewarded with magnificent views to the west over Lake Butoniga, to the north towards Buzet and the foothills beyond of Slovenia’s Julian Alps or to the east over the Ucka Mountains.

to the charming little church of St Roch at the far end of the village. Here, in addition to its view, wonder at its beautiful frescoes which cover nearly the entire interior, created by one master Anthony of Padova. Not to be mistaken with the well known Italian town, Padova is in fact the old name for the little town of Kašcerga, near Motovun.

Vižinada Offers a Mini Market and Café Bar (the Monte Carlo), both with easy parking. Stroll down into the old town for stunning views across to Motovun and look inside the Romanesque church of St Barnabus which dates from the 12th century. 15th century frescoes and Glagolitic graffiti are also much in evidence, all restored and cleaned in 2000.

Go for a Bike Ride!

There are a number of dedicated cycle trails all over Istria, enquire at your local tourist office for a map and information on bike hire locally. What better way to enjoy the scenery?

Go to Market at Motovun

There is no better way to experience Istrian daily life first hand than with a visit to the market. Motovun's is held on the third Monday of every month selling fresh fruit, vegetables and other foodstuffs along with local handicrafts and souvenirs.

Spice up your Life! Buy some Vegeta.

First conceived in 1958, Vegeta is a powdered condiment comprising a mixture of various vegetables and a combination of spices. Add it to soups, potatoes and meats for an extra ‘zingy’ flavour. In its distinctive blue packaging, you’ll find it on the shelves of every mini market and supermarket in Istria, (as well as in the larders of many private homes!), in a number of different varieties and is established as one of the most recognised brands in Croatia. It is now sold in over 30 countries worldwide.

Walk Around the Town Walls

Whilst in Motovun, take a walk around the town walls and wonder at the fabulous views. The forest land you see in the Mirna Valley is rich in truffles, a revered delicacy in Istria. Motovun's insignia, the propeller, was invented by one of its former inhabitants, a Czech from Bohemia called Josef Ressel who worked in Motovun as a forest warden. He tested his invention on the Krka river in Slovenia and then in the open sea off Trieste.

In 24 tanks of varying sizes, discover the fish and other live organisms of the Adriatic Sea. (Open 0900-2200). Situated in the pedestrianised heart of the old city, just follow the signs.

The Leaning Tower of... Zavrsje!

You'll doubtless have noticed the Italian legacy in the architecture, the food and the place names, well make a visit to nearby Zavrsje which has its own leaning tower! The belfry here, 22 metres high, has an inclination of 40 centimetres. Take your camera as this is amongst Istria’s prettiest, most aesthetically pleasing villages.
More about Istria