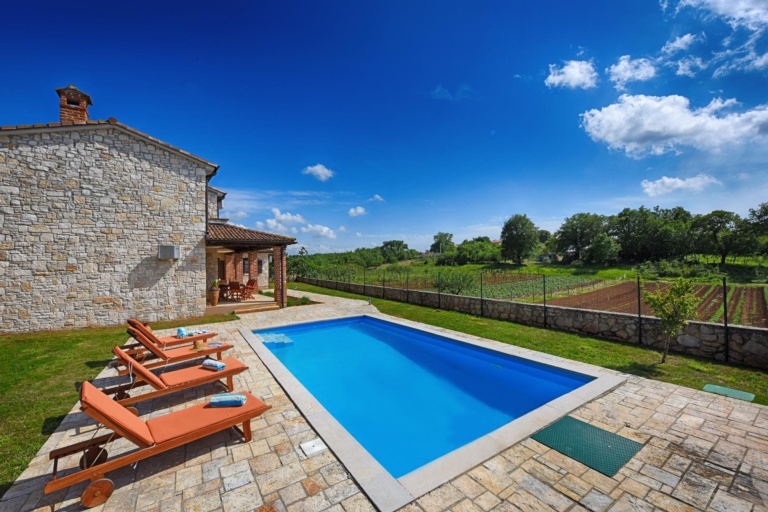 Properties for couples and small groups are much sought after and so it is with real pleasure that we welcome Helianthus to our Istrian portfolio. This pretty, stone built two bedroom villa is set on the edge of the small village of Vranje Selo, overlooking a picturesque rural landscape of vineyards, cultivated fields, woodland and beyond to the town of Vertenegro perched atop the rolling hills.

Upon entrance to Helianthus, the first impression is one of space (indeed, it is one of the most spacious two bedroom villas we have ever come across!), enhanced by white walls, tiled floors, and the uncluttered style of furnishings. The large open plan area encompasses living room, kitchen and diner, where an exposed stone wall adds a traditional touch.

This feeling of space continues in the bedrooms: the ground floor room features a high-pitched ceiling, wood beams and an arched feature window which frames the pastoral vista beyond the garden wall, whilst the principal double bedroom occupies the entire first floor.  This light and airy room boasts two private balconies, a separate dressing area, as well as a large en suite bathroom.

French doors from the kitchen/diner lead out to the dining terrace, encouraging you to dine outside, have a leisurely morning coffee or sip a glass of local wine on an evening.  Beside the house, the private swimming pool enjoys a south west aspect.  Surrounded by terrace and lawn, it is a great spot for sunbathing, relaxing and taking in the open views, with the covered terrace, running the length of the house, providing welcome shade.

Helianthus is within walking distance of two wineries, the Franc Arman Winery (1.4km) and the Rossi Vineyard (1km), where you can arrange a tasting session to immerse yourselves in the local viniculture. Nearby Vižinada (2.6km) offers a small supermarket and a couple of cafe bars, while further afield you will find the beautiful hilltop town of Motovun (16km) which is home to a great variety of cafes, bars and restaurants offering local Istrian and Italian cuisine, often with spectacular views over the countryside and truffle-rich forests of this picturesque region.

Great Things to Do Near Helianthus

Whilst there, take a walk around the town walls and wonder at the fabulous views. The forest land you see in the Mirna Valley is rich in truffles, a revered delicacy in Istria. Motovun’s insignia, the propeller, was invented by one of its former inhabitants, a Czech from Bohemia called Josef Ressel who worked in Motovun as a forest warden. He tested his invention on the Krka river in Slovenia and then in the open sea off Trieste.

This small village offers a mini market and café bar, the Monte Carlo, both with easy parking. But stroll down into the old town for stunning views across to Motovun and look inside the Romanesque church of St Barnabus which dates from the 12th century. 15th century frescoes and Glagolitic graffiti are also much in evidence and these were restored and cleaned in 2000. Vižinada was the birthplace of renowned ballerina Carlotta Grisi, star of ballet stages in London, Paris, Milan, Vienna and St Petersburg during the mid 19th century. Cultural events occasionally take place in the town commemorating her life.

...is a great destination for a lazy lunch and a wander. It affords wonderful views out to the Adriatic Sea, inland towards the Ucka Mountains, or north to the Julian Alps but was abandoned by its mainly Italian inhabitants after World War II. 20 years later, it was re-established by a number of artists and craftsmen who exhibit their work in galleries, studios and workshops. Pictures, drawings, pottery ceramics, hand made jewellery and other crafts are displayed in abundance.

Pay a visit to nearby Lim Fjord, also known as the Limski Kanal, a protected landscape and special marine reserve situated between Rovinj and Vrsar. Canyon-like cliffs rising up to 150m above sea level flank this long, narrow inlet. A couple of restaurants are situated on the water front, such as the Viking which offers dishes such as oysters on crushed ice or noodles with scampi and mushrooms.

Take a Trip to The Brijuni Islands

Once Tito’s holiday home and the meeting place for the international jet set it is now the only national park in Istria. Principal of the 14 islands, Veliki Brijuni, is the one to visit because of the diversity of its interests: see wildlife including deer and peacocks roam wild in beautiful natural parkland; Roman ruins; a safari park; beaches and traces of dinosaur footprints! You need to allow at least half a day for this excursion which involves taking a ferry from Fažana. Take a picnic with you or enjoy a meal in one of the island’s cafes.

Istria’s northern border is with Slovenia. From Buje in northern Istria, either take the road into Slovenia via the border point at Kastel or cross the border at Plovanija-Secovlje. From here you might like to explore some of Slovenia’s pretty coastal towns such as Koper, Izola, Piran or Portoroz, all within 30 minutes of the border. You’ll need your passports and some euros. If you picked your hire car up in Croatia, you’ll need to check with your supplier that you can cross the border with it.

Head north to the medieval hilltop town of Grožnjan. Since 1969 the town has been the International Cultural Centre of Musical Youth. Strolling around Grožnjan at any time of year, you’re certain to hear the echo of music being practiced or performed whilst from the beginning of June through to the end of September there are many evening jazz and classical concerts. In fact, Georgie Fame played here recently.

From Oprtalj, take the road to Motovun but turn left shortly after leaving Oprtalj signposted Bencani and Ipši. When you reach Ipši, look for Claudio Ipša on the right hand side – this is the name of the olive oil producer. A very personal service awaits you to help you choose your olive oil, truffle products are also on sale.

This charming coastal town has plenty to offer for a morning stroll or even a whole day full of sightseeing and exploration. Have a coffee or lunch at one of the elegant cafes, bars or restaurants lining the seafront and drink in the glorious view of the blue Adriatic sea, and gazing out towards the island of Sveti Nikola. Whilst in Porec, visit the open air market on the edge of the town and pick up some local produce for your dinner back at the villa by the pool.

Porec Annals - Art with a View

This annual art exhibition is one of the longest established in Croatia. Held in the spectacular historic Parliament Building in August and early September it features work by emerging Croatian artists who are supplied each year with a particular topic. Previous themes have been art and mythology, and 90’s Baroque.

Go For A Bike Ride!

There are a number of dedicated cycle trails all over Istria, inquire at your local tourist office for a map and information on bike hire locally. What better way to enjoy the scenery?

Gracišce is a charming hilltop village offering magnificent views. Wander around its largely deserted lanes and look for the Romanesque gates set in the town walls and, just inside, its loggia dating from 1549. Nearby is the church of Sveta Marija, a square structure with portico and belltower and frescoed walls inside. Notable amongst the other churches is that of Sveta Eufemija with its 14th century crucifix, though largely rebuilt in the 1500’s. Look for the Masonic headstones with their ‘secret’ symbols, some with British names.

Visit Pula for the day! Nestled in a bay on the Southern tip of the Istrian peninsula, Pula is a city full of history, culture and life. From the Arena of Pula, the great Roman amphitheatre, to the beautiful cove beaches, Pula has something to offer for all ages and all interests. There are of course also plenty of shops, restaurants and markets, giving you the opportunity to get to know the Pulian way of life by sampling local delicacies, crafts, and traditions.

One of the most popular sites in Pula for visitors is the amphitheatre, once the location for great gladiator fights. It was built in the first century AD, during the same period as the colosseum in Rome, and under the reign of Emperor Vespasian. The battles between the brave gladiators took place in the flat arena in the centre of the arena, whilst onlookers watched excitedly from the tiered seating overlooking the once sandy pit. It is thought that the amphitheatre could at one time hold around 20,000 spectators. Nowadays there are many concerts held at the arena with artists such as Sting performing in 2017! Have a look on the Pula Tourist Board website for an up-to-date schedule.

Asparagus (šparuge) grows wild throughout Istria and is ready for picking in the spring. You will see stalls at the roadside offering bundles of freshly collected examples, selling for just a few kuna. The locals braise the tops in olive oil until tender and then add eggs, salt and pepper. The result? Delicious scrambled eggs (fritaja).

Driving around Istria, look for the kažun, a round beehive-shaped field hut built using the dry-stone technique, without any mortar or concrete. The material for this was usually collected by cleaning fields of excess pieces of stone. Farmers and peasants used them for shelter and for guarding vineyards or olive groves as well as for storage of agricultural implements. The kažun has become emblematic of traditional Istria and can be found all over the region these days, however they were traditionally prevalent in the south and west.

take a stroll down Korzo, the main pedestrian street. Wonder at the grand secessionist and art nouveau architecture which betrays the Austro-Hungarian heyday of the port, Croatia’s third largest city after Zagreb, the capital, and Split in Dalmatia.

See the countryside on horseback...

Considered one of the most beautiful regions in Croatia, what better way to see the Istrian countryside than on horseback. The horse-riding centre at Pore? is located by the sea and offers riding for all levels of experience and all ages. The staff speak various languages and there are many different kinds of rides available, such as a guided ride, walking, trotting, galloping, hiking on horseback and guided routes for children.

The Orca Diving Centre in Pula offers diving lessons for all levels of experience, and if you are already an experienced diver, head out immediately and check out some of the most beautiful coastline in the Mediterranean!

A spot of golf?

The most well-known and best reputed golf course is in the very north of the peninsula, on the coast. Kempinski Golf Adriatic is a professional golf course with 18 holes in 80 acres of beautifully manicured lawn. With PAR 72, the green is characterized by an interesting layout and shape of the holes that is challenging for players of all skill levels.
More about Istria