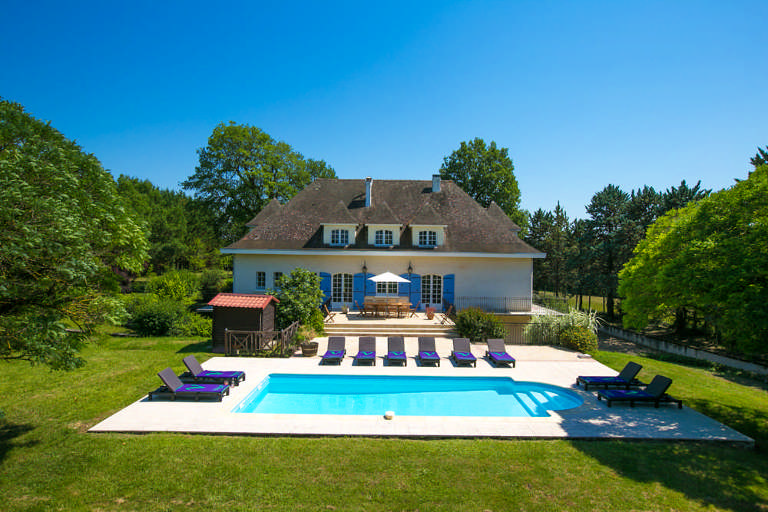 Described by those in the know as the land of good living and good food, the Gers offers the visitor a treasure trove of delightful bastide villages, delicious local produce, a relaxed pace of life, and a scenic landscape of undulating hills dotted with vineyards and fields of sunflowers.  There are few better bases from which to explore this unsung corner of south west France than Blanche d’Armagnac, a stunning white villa recently refurbished to a high standard, set in verdant parkland.

Behind the white façade lined with French windows lies a contemporary and stylish interior. Pale colours, travertine floors and painted wood beams create a harmonious backdrop to the elegant furniture. The original fireplace and lovely wrought iron balustrade remain, with the sleek kitchen and chic bathrooms (of note is the principal bathroom!) completing the picture.

There is a feeling of spaciousness throughout Blanche d’Armagnac: from the open plan living areas with the wide French doors allowing light to flood in, to the light and airy bedrooms, a layout eminently suitable for a large gathering of family or friends.

Outside is no less spacious, with a large parkland style garden and a wide dining patio which links the house to the pool area. The relaxed Gers pace of life will no doubt be easy to follow here, with lazy days by the pool overlooking the rural idyll and long leisurely meals on the terrace, perhaps finished by a glass of world renowned Armagnac from a local producer.

The nearby village of Fourcès (3km) is quite simply a delight. Classed as one of France’s ‘Most Beautiful Villages’, the village square is actually round and is surrounded by beautiful half-timbered arcade houses. With a small ‘épiciere’ and a restaurant, it will be a place to visit on a number of occasions during your holiday. More amenities can be found in the larger towns of Condom (14km), and Nérac (23km), both on the River Baïse. Two more villages with the accolade ‘Most Beautiful Villages of France’ are Montréal (9km) and Larressingle (11km), both charming to discover. History enthusiasts will surely love to explore the Roman ruins at Seviac (10km) whilst golfers can head to Barbaste (25km) and its 18 hole course.

Great Things to Do Near Blanche d'Armagnac

The circular bastide of Fourcès

The charming village of Fourcès is only 3km away. Half timbered houses surround the village square, which is acutally round. A castle once stood in the middle but has been replaced by plane trees, providing some welcome shade in the summer sun. Fourcès has a restaurant, cafe, small general store and a couple of places that sell delicious local produce.

The tiny fortified town of Larressingle is a lovely little fortified town that can be only accessed on foot. Outside of the fortifications there are a few houses, a restaurant and the reconstruction of a medieval encampment complete with typical weaponry such as trebuchets and catapults. Larressingle is under 30 minutes drive away.

'Jazz in Marciac' is a very famous jazz festival that takes place in Marciac every year from around 20th July to 20th August. Marciac is about an hour's drive away. More information at www.jazzinmarciac.com.

Parc Walibi at Roquefort, near Agen

Water rides, tropical forest, corkscrew etc... Open every day from mid June to end August. Open weekends only in May, June and September. About a 50min drive from the house. More info at www.parcagen.fr

This exceptional archaeological site just outside of Montréal-du-Gers was discovered in the 19th century. A Gallo-Roman villa dating from the 4th – 5th century, it boasts splendid mosaics and sumptuous thermal baths. The site is open for visits every day. To complete your visit, head to the museum in the village of Montréal itself, where several mosaic panels as well as other artefacts excavated from the villa are displayed. Perhaps combine with lunch in this pretty bastide town.

The renowned thermal resort of Barbotan is about 35 minutes from the house. You can go and relax for an hour or two in their heated pool with jacuzzi and hamman, or treat yourself to a massage.

At Eauze, you can discover an archaeological treasure: the remains of the Roman settlement of Elusa. Named after the ancient local tribe, the Elusates, the town was an important administrative and religious centre for the region between the 3rd and 7th centuries. You can start at the visitors' centre in Eauze's old railway station, and continue by exploring the 3000m² site itself.

This is an old 12th century Cistercian abbey and one of the most visited attractions in the Gers region. In the summer, concerts take place at the Abbaye, dubbed 'Les Nuits Musicale.

The town of Condom

The town’s name (which might seem unusual to English-speakers!) is derived from the word ‘condatomagus’, meaning old gallic market. It lies on the river Baïse along one of the main pilgrimage routes to Saint Jacques de Compostelle (Santiago de Compostela). Don’t miss the impressive Cathedral St. Pierre. The town also has an Armagnac museum, where you can learn all about the history and production of this renowned regional spirit.

For a small department, the Gers harbours quite a few official ‘Most beautiful villages in France’. The local village, Fourcès, is one of them, with its distinctive round 'square'. Montréal-du-Gers (9km from the house) is another, a traditional bastide town founded by Alphonse de Poitiers on the site of a previous roman settlement.

Shop at the market

Head to Condom on a Sunday morning and enjoy the sights, sounds and smells of the weekly market. Buy some tasty produce to take back to the property for an al fresco lunch.

Keen anglers can try their hand on the fishing lakes at Castelnau-d'Auzan (about 20 mins drive) or Barbotan-les-Thermes lake (35 mins). There are other activities at both places to entertain other members of the family who may not be able to sit still for very long!

This lake in Barbotan-les-Thermes, near Cazaubon, offers water activities including pedalos, canoeing and row boats, and fishing. On land there is mini-golf, boules, table tennis and children’s play equipment. Set in grounds of 6 hectares which can be explored on foot or by bike; take a picnic or buy refreshments on site. There is also a sandy beach and an outdoor swimming pool with waterslides. The water park is open June to September, whilst the other activities are available from 1st April to mid October.

Messing about on the river

Canoes can be hired on the river Baïse, at Beaucaire-sur-Baïse, whilst motorised boats can be hired at the harbour Condom.
More about Fourcès More about South West France