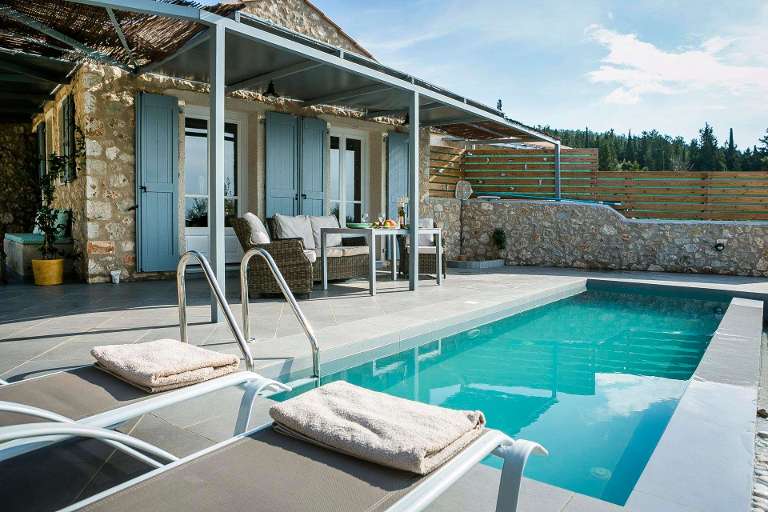 Comfortable and homely, this gorgeous, stone-clad cottage is a wonderful choice for a single traveller or couple looking to relax and enjoy the famously picturesque scenery and seemingly infinite sea views of northern Kefalonia.

Owned and cared for by the same charming local family as nearby sister properties Rosepetra and Aelia, both long-standing favourites of Vintage Travel guests, Aeletta sits in private grounds just over 550m downhill from the sleepy little town of Maganos where you will find a couple of popular tavernas and two well-stocked minimarkets catering for all essentials.

A South-West facing orientation helps keep Aeletta’s pool and terraces bathed in sunshine all day long and the gently elevated location ensures hypnotising sea views (as well as mesmerising sunsets) are inescapable, both from inside the property and out.

Appealing beaches of various shapes and sizes dot the indented coastline, some easily reached and offering facilities such as sunbeds, parasols and maybe a local taverna, others only accessible from the water via little motor boats rentable at Fiscardo harbour (note - fun and holiday memories guaranteed!).

Bohemian market stalls, spice, lace and ceramic shops, a bakery serving delicious fresh pastries as well as a comprehensive choice of bars and water’s edge restaurants can all be found around Fiscardo’s Venetian-styled harbourside (3km) where a pre or post-dinner stroll is a delightful way to end the day.

Great Things to Do Near Aeletta

Love thy neighbour - why not visit Lefkas - the island next door?

Lefkatha means "white" and the islands' name of Lefkas reflects the towering white cliffs and beaches on the Western shores of this green and unspoilt island. Sailing from Fiscardo to Vassiliki, plenty of windsurfers consider this bay serious windsurfing territory. Apart from watching the colourful sails as they strut their stuff, exploring the rest of the island is a delight. Sivota, Nidri, Geni and Lefkas Town offer a wonderful variety of beaches, villages and towns to explore

Spend an afternoon at Myrtos beach

We suggest afternoon, because this is when the sun is shining fully on the beach, and you'll enjoy the amazing experience of bathing at one of the most glorious beaches. Myrtos has regularly been voted amongst the top 5 beaches in Europe over the past few years, and we are sure that you will endorse this bold claim.

On the biggest festival day of the year in Greece, the festival of Saint Maria, the most bizarre goings on take place in a village called Markopoulo. The story goes that Nuns once begged the Virgin Mary to turn them into snakes during a raid, and ever since, snakes are brought out to slither around the icons of the church in Markopoulo on this day, and many people consider this festival as a good luck festival and by touching or kissing the snakes, you are going to have a lucky year!

Saddle up and explore

There is an excellent established riding school located in the village of Zervata, 4km south of Sami. A truly wonderful experience, their experienced team offer everything from 1-5 hours trips, to camping overnight with barbecue and campfire. For horse riding enthusiasts, this has to be high up on your list of things to do

The Greeks love their pies, and the Kefalonians have taken it one step further in producing this nourishing dish. Everyone has their own secret recipe, so we are unable to tell you exactly what's in it, but it is filo pastry stuffed with minced pork meat and rice along with the secret recipe of spices and sauce. Delicious!

Kefalonia has many excellent wineries, all of which are delighted to offer wine tastings. But please respect the laws, and don’t drink and drive. Why not go twice, and swap drivers?

Island hop to Zakynthos for the day

Another island, not so far away from Kefalonia, but it could be at the other end of the world, such is the contrast between these beautiful islands. Take the daily ferry over from the port of Pessada for the 90 minute crossing to Skinari, in the north of Zakynthos, and from there you could take another boat trip to the amazing ship-wreck beach, or go for a sightseeing tour before catching the evening ferry back.

Although they have deservedly become a serious attraction on the Island, it’s never so busy that you have to spend much time waiting to see them. We recommend that you try to arrive there either early(ish) morning or late afternoon, so as to be sure to avoid any bus party that may be visiting the caves as part of their Island tour. The Stalagmites and Stalactites are well worth the effort of driving here.

Find the seafarer in you by hiring a boat

Ideal for finding your own secluded cove or even crossing the narrow channel to explore the neighbouring island of Ithaca. There are countless bays and coves not accessible by car so it is possible to find your own secluded beach and relax in privacy, away from the crowds. There are plenty of small coves within easy reach of Fiscardo. The more adventurous seafarers might like to cross the channel to Ithaca, tie up in the miniature harbour of Ancient Polis and perhaps walk up to the village of Stavros for lunch or a coffee.

More intrepid adventurers can drive to the gates of Mount Ainos national park, and then hike to the peak for a picnic. Despite being the third highest mountain in Greece at 1632 metres, this is an easy climb with a comfortable track and lots of footpaths in good condition thanks to the shepherds who walk with their flocks over the mountain. It takes about three hours to make the ascent, and you're likely to see some of the 20 or so wild horses that roam the countryside here. Keen wildlife spotters will also see raptors such as buzzards and owls, the vast rare Griffon vultures, and various types of falcon. In fact, over 50 per cent of Greek bird species favour this mountaintop, great for bird-spotters or just nature lovers you'll also be able to enjoy views over the whole island on clear days.

Between the villages of Lakythra and Metaxata visit the eerie Mazarakata tombs and wander among the ancient graves where wildflowers bloom in colourful abundance. Excavated mainly by Kefalonian archaeologist Panayotis Kavvadias in 1908, the burial chambers had been filled with decorative clay pots, tiles, glassware and gold plates, which are now housed in the Archaeological Museum of Argostoli. Today all that remains are the tombs themselves, where you can clamber and explore as you choose. It's a remarkably tranquil area, and the ideal place to spend a few hours with a sketchpad imagining the ancient civilisation that created it.

To the ends of the world?

The Monastery of Kipouria (Moni Kipoureon) on the Paliki peninsula, near Lixouri has unforgettable sunsets. The magnificent position of the monastery itself is located at the western side of the island of Kefalonia, overhanging a cliff that crashes into the Ionian, and makes you feel as if the end of the world was beneath your feet. Dating from the far away times, it is also known as the "veranda of the Ionian". There is a tour given by a solitary monk who still lives there, an unforgettable experience!

Soak up history high above at St George's castle

8km south of Argostoli, the Venetian castle of St George sits high on a hillside. Though Byzantines built the bulk of the castle in the 13th century, the earliest traces of the edifice date back to 394 AD when Kefalonia was still part of the Roman Empire and its main purpose was to shelter the villagers from attacks by marauding pirates. Venetians added the finishing touches, giving the castle its clean, elegant lines. Thanks to a recent EU grant that paid for some preservation works, the edifice is safe to explore, so you can meander among the ancient rooms at will. Although there are few displays to tell you about the castle's history, the panoramic views and the castle's beauty make it worth a visit, especially at sunset as the island below turns golden in the fading light.

Fiscardo is famous for its pretty pebbly coves and bays, but why not take a day to drive to the south of the island and experience the long 5km long Lourdas Beach, famous Mounda beach, a protected environment for the Caretta-Caretta turtles who hatch their eggs there or splendid sandy Skala beach, miles of coastline begging to be explored!

Antisamos - What a Beach!

A great beach used as a backdrop for much of the Captain Corelli movie. A sweeping white pebbly bay and  great for snorkelling. Chilled out beach bars on hand to offer bar service to your sun lounger!

to the aquamarine waters of Melissani Lake. We should entitle this 'not to be missed'. Melissani Lake is simply stunning: the colours and eerie atmosphere is something you will never forget.