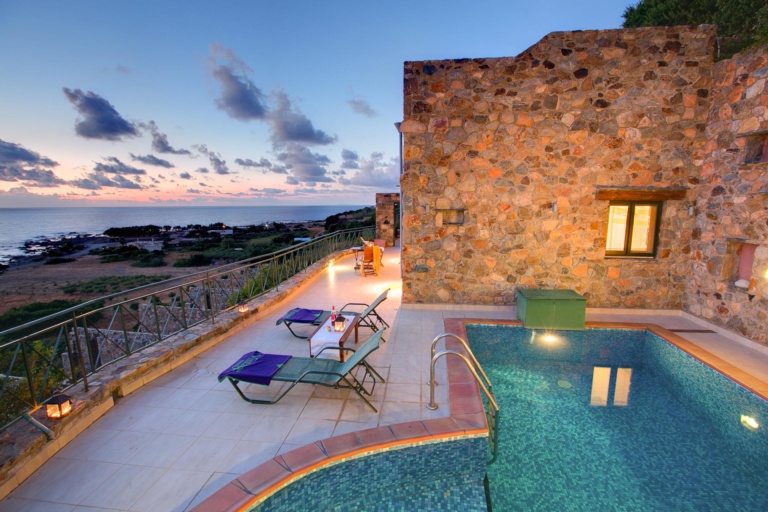 With dramatic and sweeping sea views to enjoy from the pool terrace, Amfitriti has long been one of our most popular houses for a peaceful break in an attractive private setting. Over recent years many honeymooners and celebrating couples, as well as individuals looking to read, write or paint, have all enjoyed visits here. Thoughtful design has seen the creation of an inviting open space that merges the living, dining and kitchen areas together, a dedicated sleeping area sitting to one side with a queen-size bed, spa bath, shower and private cloakroom alongside. The décor, a combination of vivid and pastel shades, harmonises perfectly with the property’s natural stone walls and is a lovely example of how traditional Cretan architecture can also be given a considered, contemporary feel.

Rich in natural landscapes with long stretches of rugged unspoilt coastline, scattered hamlets dotting the landscape and diverse flora and fauna combining to stimulate the senses, the south west corner of Crete is widely considered one of the finest spots on a wonderfully sunny island in which to completely relax. Childhood memories may well be rekindled by the simple pleasure of exploring the rock pools in front of Amfitriti or wandering along the nearby shore.

Should you feel the urge for a little gentle activity why not enjoy a swim, windsurf or snorkel over the nearby coral reef before a meal at one of the two local tavernas in the Livadia area (1.5km) or pick up some fresh local produce at the mini market, just 5km away on the road to the Elafonissi Lagoon.

Speaking of Elafonissi, the dazzling white sand, aquamarine sea and shallow waters of the lagoon are considered to be amongst the warmest in all of Crete with the area enjoying official EU protection for its abundant natural beauty. Reminiscent of a Maldivian atoll a sandbar, tinged pink by the surrounding coral, connects the beach to a little islet just off shore and a couple of handy tavernas along the edge of the sand dunes serve traditional local dishes and chilled drinks.

Boasting a wonderful historic harbour and atmospheric backstreets with a wealth of shops and restaurants, Chania on the north coast is a great destination for a day trip. Walkers and ornithologists alike will certainly enjoy the stunningly scenic Gorge of Topolia, famously an annual stopover point for numerous rare and unusual bird species on their migration to and from Africa.

Great Things to Do Near Amfitriti

Go have a look at Souda

Souda Bay is one of the largest and deepest harbours in the Mediterranean. Between the airport and Chania town this vast stretch of water is criss-crossed by boats, military and civilian (don't take pictures of the military boats - it is strictly prohibited.) The word souda is derived from the Arabic language, and means narrow passage. This bay is now populated by the Greek Navy, NATO and a large American base and accounts for the eclectic and cosmopolitan atmosphere in the town.

Have a wander around

The original capital of the island (since 1971 that honour has been passed onto Heraklion), Chania is one of the prettiest towns in the whole of Greece - perhaps on a par with Monemvasia, Nafplion and Corfu town. The city is reputed to be the oldest city in the world, and boasts the mix and match of Venetian and Turkish influences and architecture.

Visit the ancient site of Aptera

Here you can visit the remains of a very important city dating back to the 5th century BC. It really is a lovely walk, and with there being no admission charge, a great cheap day out!

Visit the palace of Knossos

Excavated in the year 1900 by an English archaeologist by the name of Sir Arthur Evans, this is a most impressive palace, and we recommend that you hire a guide in order to benefit from their wealth of knowledge. This makes a great day out for all of the family.

It is recommended to take a local guide with you, but no trip to Crete is complete until you walk along the deepest gorge in Europe, the Samaria Gorge.

Drive through the Amari valley

Perhaps the most breathtakingly beautiful drive on the entire island, in particular the stretch of road between Mount Idi and Mount Kedros.

Visit the Archaeological museum in Knossos

Close to Heraklion open Tuesday – Sunday from 09:00 hrs until 19:00 hrs. Visit by far the world's largest collection of Minoan artefacts.

Take a ferry over to Loutro

From the village of Hora Sfakia take one of the regular ferries over to this lovely tranquil spot.

The last 7 days of July sees this annual event unfold in the public gardens. Be prepared to drink all the selection of wines from the same cup direct from the barrel, and the local folk dancing will help to provide some focus!

A wonderful trip for lunch. You can rent a small boat for half an hour and row yourself around the lake, then it's time to relax in one of the many waterfront tavernas.

Raki or Tsikoudia is distilled from the stalks and skins of grapes left over from wine pressing. It is drunk widely and you are likely to be offered a thimble-full glass of raki wherever you go. It can contain anything between 35-65% alcohol – you have been warned!

Treat yourself to a typical Meze a series of tiny dishes that accompany the aniseed based liquor. You can try an Ouzerie, that is similar to a Spanish Tapas bar - a great way to spend a lazy afternoon.

Bring out the botanist in you!

Coastal habitats have their own flora: see if you can spot the sea daffodil, with large white flowers, tamarisk trees, yellow horned poppies or orchids.

Ornothologists may spot the glossy ibis, the crane, the white stork and a variety of egrets and herons, as well as warblers and wagtails. For the dedicated bird-spotters, Crete is one of the last strongholds in Europe of the Lammergeier, or Bearded Vulture with a wingspan of almost 3 metres. There are 9 to 10 pairs on the island and they frequent higher altitudes.

Situated approximately 25km south east of Rethymnon, the monastery is famous for the 1866 siege, when the Greeks rebelled against the Turks. Look round the lovely 16th Century Rococo church.

A Cretan speciality served in most tavernas as a starter. Dried crusts soaked in tomatoes and topped with crumbled feta cheese – delicious!

Visit any Zaxaroplastio for a sweet pastry!

Explore the back streets of Chania Harbour

Tiny streets come alive with shops with ceramics, leather, clothes, jewellery to browse through, and if you get tired, try a coffee and a pastry in the cafes lining the picturesque harbour front.

Have a wander around Chania

The original capital of the island (since 1971 that honour has been passed onto Heraklion), Chania is one of the prettiest towns in the whole of Greece - perhaps on a par with Monemvasia, Nafplion and Corfu town. The city is reputed to be the oldest city in the world, and boasts the mix and match of Venetian and Turkish influences and architecture.

The Manousakis Winery is the culmination of the dream and passion of founder Theodore Manousakis. Ted, as he is more frequently called, was born in Vatolakkos in 1943, and spent his early childhood years in the village until the age of 11. For reasons much beyond his control and much too complex for a young boy to understand, he left his home to find a better future in the far away “Promised Land”, America. Following his university education in the U.S., he entered business and was successful in a number of business endeavours including industrial security, real estate development, and hotels. Meanwhile, he assimilated in the great melting pot of the world, America, and nearly forgot his native language and Cretan traditions. Yet during the years away from his native village he always yearned to return home and find his roots; if not permanently, certainly more than as a mere visitor. Wine was a way of life in the village for as long as he could remember from his boyhood years. What a way to pay tribute to and honour the Cretan traditions and way of life, he thought. And, what a wonderful and civilized way to bring people together to enjoy the simple joys of life! The combination of nostalgia or “nostos”, as the ancient Greeks made reference, along with the perfect soil, sun, and weather conditions of Crete were the driving forces behind our first vineyards in the foothills above Vatolakkos. For Ted, the Manousakis Winery represents his roots; his yearning to return, his tradition, his heritage, and, above all, his family. Our logo with the three flowers called “Manousakia” in the Cretan dialect, (from which our name is derived), represents his three daughters. It is only fitting that the inspiration of this symbol is a blending of the beauty and exquisite fragrance of nature and the warmth and comfort of family! Ted Manousakis has his permanent home in Washington, D.C., but the winery remains a family-run business. His youngest daughter, Alexandra, moved to Chania in 2007 following studies at New York University, and now manages the Manousakis Winery.
More about Crete