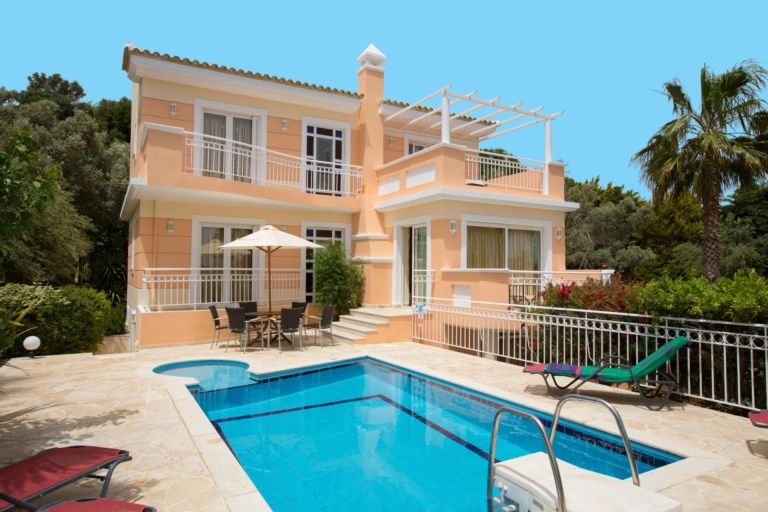 Surrounded by abundant vegetation, countless vineyards and olive tree plantations, this lovely property enjoys a delightful rural setting and gorgeous sweeping views to the sparkling Cretan Sea. The yellow house façade is in perfect contrast to the backdrop of lush foliage that carpets the surrounding hillsides while the spacious landscaped grounds have olive, palm and fir trees providing plenty of shady hideaways in which to kick back and relax.

Fringing the sunny pool terrace, the spiky red blooms of the callistemon tree, often called the bottlebrush, provided inspiration for the house name (a good choice of name we think, as Villa Bottlebrush just does not sound right!) whilst the barbecue and wood-fired oven are bordered by attractive stone and grassed dining areas.

Spreading over three levels, the house interior is modern, bright and well appointed. On the ground floor, comfortable leather sofas adorn the inviting living area from where there is access both to the pool terrace and a large, semi-circular terrace - two wonderful spots from which to admire the always spectacular panorama.

All three bedrooms, a twin on the ground floor and two double bedrooms upstairs, have en suite facilities and individual private balconies on which to relax and soak up the gorgeous scenery.

Nearby Aghia Triada village (1km) is an interesting place to wander through; simple whitewashed houses rub shoulders with semi-crumbling edifices from another era, and there is a taverna and a kafenion. Adele (1.8km) is a larger village with a small mini-market and a couple of tavernas, whose winding road leads down to the Platanies beach (3.5km). A sweeping coastline stretching 13km consists of a series of sandy beaches intersected by fields of bamboo swaying in the breeze.

Radiating out from the historic harbour of Rethymnon Town (10km) are a wealth of atmospheric cobbled streets full of all sorts of spice, lace, art, clothes, shoe and food shops. The general prefecture of Rethymnon stretches for miles up to the mountains and you will find it is part of the famous E4 Pan-European walking trail. This extensive pathway, created by the Ramblers Association, covers over 10,000km from Tarifa in Spain to eastern Cyprus and passes through some of Europe’s most scenic, unspoilt areas. For hikers and ramblers or beach lovers, Callistemon Tree is an excellent base to explore the dramatic Cretan countryside and mountains.

Great Things to Do Near Callistemon Tree

The Fortezza (fortress) overlooking Rethymnon town was built by the Venetians (1573) to protect the city. Not only are there buildings of interest and a church, the views from the palace to the town are a great way to start planning your tour of the town, and the sweeping sea views.

Visit the Venetian Loggia in the heart of Rethymnon

Dating back to the 16th century and now used as the archaeological museum's shop (books, models, jigsaw puzzles and cards) this is a good landmark as a meeting/rendezvous place. There is a travel agent opposite with a Piraeus Bank cash machine and on the opposite corner a shop with maps, guidebooks in several languages, foreign press racks and magazines

The museum is in Rethmnon housed in a restored Venetian building with an interior courtyard. There are eight halls with collections that include textile and basket weaving, embroidery and lace, costumes, ceramics, historic photographs and maps, weapons and coins. Next door is a bakery where the ancient door is kept open and the baker is happy to demonstrate how he makes the traditional fyllo pastry leaves!

Try a tasty tipple or two...

In Rethymnon, in the shop Raw Materials, (which is owned by the Avli restaurant owners) there is an amazing array of products and produce from Crete and all over Greece. It is a great place to buy things for people who like cooking, food and wines. At the back is the wine cellar - the dramatic and large wine tasting room sees wine-tastings in progress every Tuesday. There are more than 460 Greek wines (labels) in the shop.

Souliou street in the heart of Rethymnon hosts a wealth of jewellery shops and large selection of English titles to be found in the bookshop. If one street is to be the single place for find all the gifts you need to complete your shopping wish list this is it: gather herbs, cosmetics, books, a variety of jewellery, pottery and for shoeaholics there are quite a few streets leading off Souliou Street that might tickle your fancy...

It is worth seeing the church of St Panteleimonas and the house of Constantinos Ghiamboudakis, the Cretan hero who blasted the powder keg at Arkadi during the revolt of 1866, so that the Ottomans would not capture the people who had found refuge there. The monastery of Agios Arsanios, dating back to the 16th century is found near the village Pangalochori, some 5 kilometers east of Adele, close to the national road leading to Heraklion. The Monastery is celebrated in the name of Agios Georghios (St. George) and it is worth visiting it for the original wood carved icon screen and the wall paintings of the Catholicon.

Visit the magnificent Cave of Melidoni

The cave of Melidoni, or Gerontospilios as the locals use to call is 31 kilometers to the east from Rethymnon and 2 kilometers from the village of Melidoni at the northwest. It used to be an important ritual place in the Neolithic times, whereas during the Minoan period it was dedicated to the mythological bronze giant Talos. An inscription found during the excavations in the cave shows that in the Roman era the place was dedicated to the worship of Hermes (Mercury). The cave played an important role during the revolts of Cretan people against the Ottoman domination as it served as a place to hide for the warriors and a refuge for the fleeing population.

Experience the Arkadi Monastery on your doorstep

As you are in the Arkadi Region of the Rethymnon prefecture, it seems only fitting to visit the the Holy Monastery of Arkadi that the region is named after. An impressive building, it is one of the most important historic monuments of Crete, an eternal symbol of sacrifice for freedom, as it is here that Constantinos Ghiamboudakis, the Cretan hero, blasted the powder-keg during the revolt of 1866, so that the Ottomans would not capture the people who had found refuge there. The Monastery is found at the northwest side of Psiloritis, at a height of some 500 meters. Tradition states that the Monastery was established by the Byzantine emperors Herakleios and Arkadios, after whom it has been given its name. However, it is more possible that the Monastery was named after a monk called Arkadios.

Drive down South to

Frangokastelo to see the old fortress - or rather its surviving walls, it's then a a must-do trip up to Anopolis - the village high above Chora Sfakia. Close to the beginning of the village on the left is the Anopolis bakery - sample some of the best sfakian pies and the chance to buy the delicious local sweet rusks, honey and other baked goods. Sit outside and have a mountainscape view and an elliniko (coffee).

Raki or Tsikoudia is distilled from the stalks and skins of grapes left over from wine pressing. It is drunk widely and you are likely to be offered a thimble-full glass of raki wherever you go. It can contain anything between 35-65% alcohol - you have been warned!

If it gets too hot down by the sea, drive up to Spili a picturesque village located at an altitude of 430 metres, 28 kilometres south-east of Rethymno. Due to its altitude the village offers an astonishing view. It is surrounded by verdant vegetation and is filled with trees, fountains, springs and chapels and churches with wonderful murals. The main square of the village is lovely and has a fine stone fountain consisting of a row of stone carved lion heads from where crystal-clear water flows. The water guarantees that the air is fresh, cool and pure. The village is also known for a unique type of weaving and has a few tavernas and an old fashioned atmosphere.

This is one of the best Minoan palaces to visit. It has been less enhanced than Knossos that makes it easier to imagine it in days gone by. The scenery on the drive up to it is beautiful and its location is stunning. Information panels are all all around to help you make sense of it all, although a guide book can be handy. One thing is that there is not much shade, so if you are there in the summer maybe get there early before the day heats up. There is a nice snack bar to refresh you once you have seen it all, and a good size gift shop to stock up on souvenirs.

Have a splashy day out at Water Park

This water park is past Heraklion so a bit of a drive but it is a great fun day out for couples or parents with children! Plan to go for the day and take food and drink as it can be pricey. We're advised by some experts (average age 8-10) that the best slides are the sidewinder, hyper race, the black hole, kamikazee and free fall. Beware of the turbo guns - you have been warned!

This breath-taking lake is the only one in Crete, and the brillliant aquamarine waters are a wonderful backdrop for a spot of lunch. Afterwards, you can rent pedaloes or a small boat for half an hour and row yourself around the lake, and work up an appetite for supper!

Journey to Anogia in the Psiloritis Mountains and

enjoy a Greek coffee at the square in the upper village (Agios Georgios square), the atmosphere here is wonderful - hospitality and welcomes are surprising in their warmth. 740 metres up on the north face of Mount Psiloritis to be precise. It's a short hop from here to the stunning Nida Plateau, the Ideon cave (mythology: Zeus grew up here), the observatory at the top of the Skinaka as well as the ancient settlement of Zominthos. In Anogia, excellent local cheese and Raki are available to buy, at the shop on one corner of the square. You are more likely to see men wearing the Cretan baggy trousers tucked into their boots, heads decorated with nets, here than just about anywhere else. This is miles from designer name mecca. The small church of Agios Georgios is worth a visit if it is open.

A Cretan speciality served in most tavernas as a starter. Dried crusts soaked in tomatoes and topped with crumbled feta cheese – delicious!

Treat yourself to a typical Meze -a series of tiny dishes that accompany the aniseed based liquor, you can try an Ouzerie, that is similar to a Spanish Tapas bar a great way to spend a lazy afternoon.In Rethymnon, down the side of the mosque runs Othos Vernadou - a particularly pretty place to come and eat, there are shady courtyards and imaginative cafe interiors here, try Minares, or the Ouzeri/Mezedhes place further down the street.

The last 7 days of July sees this annual event unfold in the public gardens. Be prepared to drink all the selection of wines from the same plastic cup direct from the barrel, and the local folk dancing will help to provide some focus!

A bit of a mouthful in both senses!

Visit the Palace of Knossos

Excavated in the year 1900 by an English archaeologist by the name of Sir Arthur Evans, this is a most impressive palace, and we recommend that you hire a guide in order to benefit from their wealth of knowledge.
More about Rethimnon More about Crete