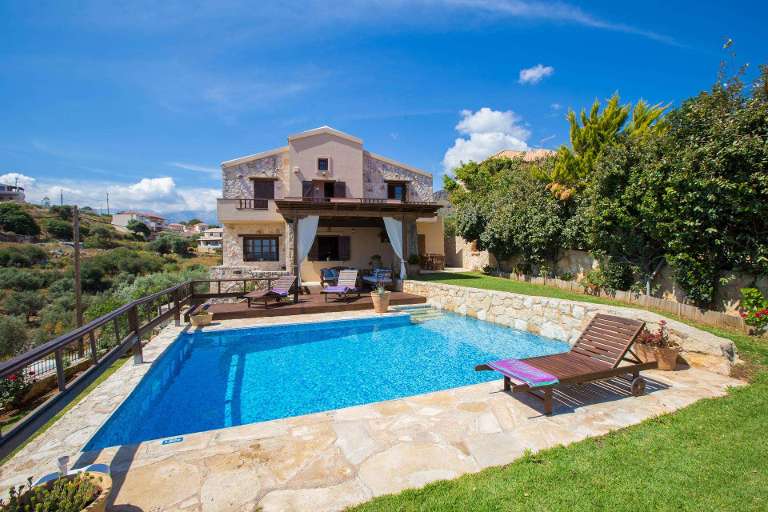 The lovely green terraced lawns of Lithos create a great contrast to the striking cobalt blue sea of Souda Bay immediately behind. Uninterrupted sea views from the terraces dominate the horizon and the huge curve of the horseshoe shaped bay, one of the largest in Europe, makes even the opposite coastline an integral part of the sweeping panorama.

Lithos is a wonderful stone house, with spacious gardens set in an ideal location to explore western Crete and the Apokoronas mountain villages of which Megala Chorafia is one of the prettiest. Just 1.2km away you will find the village mini-market, a ‘kafenion’ and two tavernas serving some fine local dishes, such close proximity meaning that for many guests taking the car is not essential when popping out to have dinner or top up the shopping.

A welcoming atmosphere is immediately apparent on entering the front door with an appealing and timeless Cretan style prevalent throughout. All locally made the traditional furnishings include both wood and stone sofas adorned with plump colourful cushions, a carved wooden dining table, chairs and dresser complementing the wooden rafters, cooling floors of stone and polished boards as well as individual personal touches such as the antique 1930s radio. French doors open onto the outside terrace where the rattan sofas and coffee table ensure that al fresco living is a pleasure. A couple of stone steps lead up to the ground floor twin bedroom with separate shower room and a patio. On the first floor, the double and twin bedrooms both access a balcony that runs the width of the property, offering ‘dizzying’ views of sea and sky.

A Cretan oven and a barbecue are sited on a lower terrace to one side of the pool and garden with a pergola shading a traditional stone built table and chairs. Stunning views are absolutely guaranteed from here providing every reason to linger as the sun rises, sets… or just shines in general!

The Apokoronas Mountains are peppered with countless picturesque tiny hamlets and the location of Megala Chorafia with a population of just 300, several churches and the above mentioned amenities ranks it amongst the best. It is also just 5km to the sandy beach of Kyani where there are a couple of beachside tavernas and, 4km further along, Kalives is a bustling friendly village with plenty of tavernas and shops to explore. Delightful Chania (23km) has a wonderful Venetian harbour, lots of cobbled streets and a great indoor market that sells all kinds of fresh foods, spices and local specialities. Off the beaten track yet so close to tavernas and beaches, this peaceful haven makes a marvellous holiday base.

Great Things to Do Near Lithos

Spend a day in Chania

The original capital of the island (since 1971 that honour has been passed onto Heraklion) Chania is one of the prettiest towns in the whole of Greece (perhaps on a par with Monemvasia, Nafplion and Corfu town). The city is reputed to be the oldest city in the world, and the mix and match of Venetian and Turkish influences and architecture.

Go have a look at Souda

Souda Bay is one of the largest and deepest harbours in the Mediterranean. The word “souda” is derived from the Arabic language, and means narrow passage. This bay is now populated by the Greek Navy, NATO and a large American base and accounts for the eclectic and cosmopolitan feel to the former capital - Chania

Visit the palace of Knossos

Excavated in the year 1900 by an English archaeologist by the name of Sir Arthur Evans, this is a most impressive palace, and we recommend that you hire a guide in order to benefit from their wealth of knowledge.

On the way from from Chania to the beach of Elafonissi via Drapanias there is a sign stating Wine Museum, a bit like the Agroturismo places in Italy. The Pnevmatikaks Winery is a nice and delicious wine tasting venue, a family business that grows grapes and olives. You can taste all they produce: different wines including a wine called Romeiko, produced the way it was done in antiquity. The Romeiko has a taste similar to a nice sherry and is 14.5 proof. Recommended produce are their olive oil and Raki (tastes similar to Grappa). If you purchase wine and/or oil they pack the bottles up in such a way that they arrive safely home.

Raki or Tsikoudia is distilled from the stalks and skins of grapes left over from wine pressing. It is drunk widely and you are likely to be offered a thimble-full glass of raki wherever you go. It can contain anything between 35-65% alcohol – you have been warned

From May to October, you can take daily cruises from Kissamos port to Gramvousa and Balos (42 km west of Chania), leaving in the morning and returning in the evening.Gramvousa (also called Tigani peninsula) has a castle on top of the island built by the Venetians to protect Crete from a Turkish occupation. It was one of the last unconquered bastions and it was the first area of Crete to be liberated from the Turks in 1825 (Turks were not expelled from all the rest of Crete until 1898). 3000 Cretan rebels were planning operations from Gramvousa. During this period of turmoil, the residents of the island started looting boats passing through, which gained the island its pirate reputation! The Gramvousa/Balos region is a protected biotope. There are 400 different plants on Gramvousa, 26 of them endemic to Crete. The Anthemis glaberrima (a type of daisy), the Allium platakisi (a wild onion) and the Silene litegripetala are found only in this area and are protected species. In the shallow parts of the sea, the Mediterranean plant Posidonia oceanica thrives, providing shelter for marine life. 98 bird species have been reported in the area. 20 of them are protected and 14 of them are threatened species (like the vulture Europe Gypaetusbarbatus). The Mediterranean seal (Monachus Monachus) and the Caretta Caretta turtle find shelter in this area. Also, a herd of wild donkeys lives on the peninsula!

Journey to Anogia in the Psiloritis Mountains

Enjoy a Greek coffee at the square in the upper village (Agios Georgios square), the atmosphere here is wonderful - hospitality and welcomes are surprising in their warmth. 740 metres up on the north face of Mount Psiloritis it's a short hop from here to the stunning Nida Plateau, the Ideon cave (mythology: Zeus grew up here), the observatory at the top of the Skinaka as well as the ancient settlement of Zominthos. In Anogia, excellent local cheese and Raki are available to buy, at the shop on one corner of the square. Here you are more likely to see men wearing the Cretan baggy trousers tucked into their boots, heads decorated with nets, than just about anywhere else. The small church of Agios Georgios is worth a visit if it is open.

The Cretan Runner written by Giorgos Psychoundakis is a great book describing some of the heroic exploits the Cretan resistance along with British soldiers and pilots got up to during the second world war. Giorgios was originally a shepherd but became a member of the resistance after the German invasion. His heroic and selfless exploits and the general population are described in the book. It is regarded as a classic book of its type. There are two British War cemeteries in Souda Bay, however, much of the action took place around Maleme where a large German War cemetery dedicated to German soldiers was until recently tended by Giorgos himself. The British cemeteries are in a beautifully kept place, moving and humbling.

One Man's folly is another's delight

On the way out of the village of Kalyves going west to Kalami there is a sign and arrow to Koumos. This place is worth a visit and is known as 'one mans folly'. A collection of buildings including a taverna and a chapel with a domed roof all built from local small misshapen stones. This eclectic mix of buildings are all made from small rocks and all built by one man over a period of 10 years. There are mosaics on the paths; whilst walls display images of fish, snakes and various animals. There are also stone tables and chairs. If you just want to wander around, take photographs or just be amazed,pop along as there is no admission charge. Look out for the occasional ostrich or even a llama - quite surreal as these weren't made out of stone!

The Maritime Museum delivers a superb introduction to the History of Crete and is by no means only for maritime mavens, you will learn more here in half an hour than most could teach you about the events that filled Crete's moving past.

Elafonisi (Island of Deer) is like paradise on earth, and posessess a wonderful beach with pink coral sand and crystalline waters, a small islet connected to the rest of Crete by a shallow reef that can be crossed when the sea is calm. This islet is lying on the south-west corner of Crete, the journey itself is amazing, with a narrow tunnel and stunning wild Cretan scenery. Beware in high season, it can get very busy, but is so large there is always a peaceful spot to be found. There is an excellent taverna at the beginning of the sand dunes.

This breath-taking large natural lake is the only one in Crete, and the brillliant aquamarine waters are a wonderful backdrop for a spot of lunch. Afterwards, you can rent pedaloes or a small boat for half an hour and row yourself around the lake, and work up an appetite for supper!

Visit the Archaeological museum in Knossos close to Heraklion

Open Tuesday – Sunday from 09:00 till 19:00 hrs and visit by far the worlds largest collection of Minoan artifacts.

Drive through the Amari valley

Perhaps the most breathtakingly beautiful drive on the entire island, in particular the stretch of road between Mount Idi and Mount Kedros.

Take a ferry over to Loutro

From the village of Hora Sfakia take one of the regular ferries over to this lovely tranquil spot.

Chania is the capital of the Prefecture of the same name and the second biggest town in Crete, with a population of 60,000 inhabitants.Chania is one of the nicest towns of Crete with wonderful houses, parks and squares.The old city has preserved the charm of the Venetian and Turkish periods. Entire Venetian, Turkish and Jewish quarters are saved, with many well preserved buildings in the narrow picturesque streets. On Leather Lane near the harbour there are plenty of shops selling all kinds and qualities of leather goods and a really interesting indoor covered market Chania Town is worth a visit just for the shopping. The harbour is beautiful with an old mosque providing interesting architecture. Museums from the Naval Museum to the Byzantine Museum there is something for everyone. Restaurants and Tavernas surround the harbour and boats leave from here for 2-3hr trips and you can also catch a horse and buggy. Have a wander around the back streets, they are mainly pedestrianised and the houses and shops are very Interesting and pretty, with little restaurants and cafés tucked away in corners - very romantic.