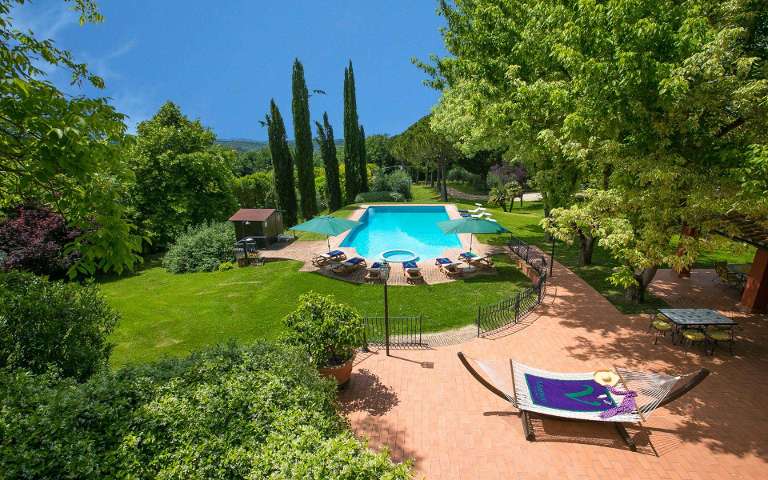 Exuding warmth and character, Casale Le Spighe is a beautifully restored villa set in its own verdant parkland, close to the village of Giove (3km) at the southern tip of Umbria.

A charming ambience prevails throughout the property, with wood beams, cotto floors, interesting paintings and colourful rugs creating the perfect backdrop to classic Umbrian furniture. The added attraction of a billiard table on the ground floor, alongside the comfortable lounge, will provide entertainment for guests of all ages. On the first floor, there is an additional sitting room and study, as well as the master bedroom. The bedrooms are beautifully decorated, spacious and comfortable.

Outdoor living is equally appealing with ample dining terraces, an expanse of lawn and a larger than average swimming pool complete with whirlpool corner.

Essential amenities including a couple of restaurants can be found in Giove, one of many pretty hilltop towns to be found in this area of Umbria and its neighbouring region, Lazio. A meander along the country lanes will take you through stunning countryside and lead you to some fascinating villages and towns, and no doubt, a restaurant or two offering a tempting lunchtime menu. For those seeking city sightseeing, historic Orvieto, with its magnificent cathedral perched high on an outcrop, is half an hour away.  And finally, glorious Rome is easily accessible by car or train for a day trip.

Great Things to Do Near Casale Le Spighe

Wednesday is market day in Giove

Head into the village of Giove on Wednesday morning to enjoy the atmosphere and to buy fresh local produce for relaxed meals on the terrace. Perhaps do as the locals do and combine your visit with an espresso in the local bar.

Created by the ancient Romans, the Cascata delle Marmore is a staggering 165 metres high. It is just under an hour's drive from the house. The falls are only open at certain times of the day, be sure to check opening times before going.

Day Trip to the Eternal City

A 5 minute drive from the house will take you to Attigliano where regular, direct trains will take you for a great day out in Rome in under an hour. The city which has captured the imagination of visitors for millennia needs no introduction but suffice to say, a day's sightseeing will only afford a tantalising glimpse of what it has to offer. A truly awe-inspiring city, there seems to be some new marvel around every corner. The many highlights include: The Forum and Palantine Hill, St Peter's Square, the Colosseum, the Pantheon, the Trevi Fountain, the Spanish Steps and much more!

This underground excavation lies directly under the Church of San Domenico, and was discovered in 1979. You can take a tour lasting one and a half hours, in Italian or English, that guides you through the local history with a look into Roman plumbing and even an underground Roman church with surviving frescoes.

Take the train through Tuscany

Attigliano-Bomarzo station is just 5 minutes drive from the house. From here you can get direct trains to Cortona in 1 hr 15 mins and Florence in 2 hrs 40 mins. Enjoy the beautiful Tuscan countryside en-route and no need to worry about parking when you arrive.
More about Giove More about Umbria