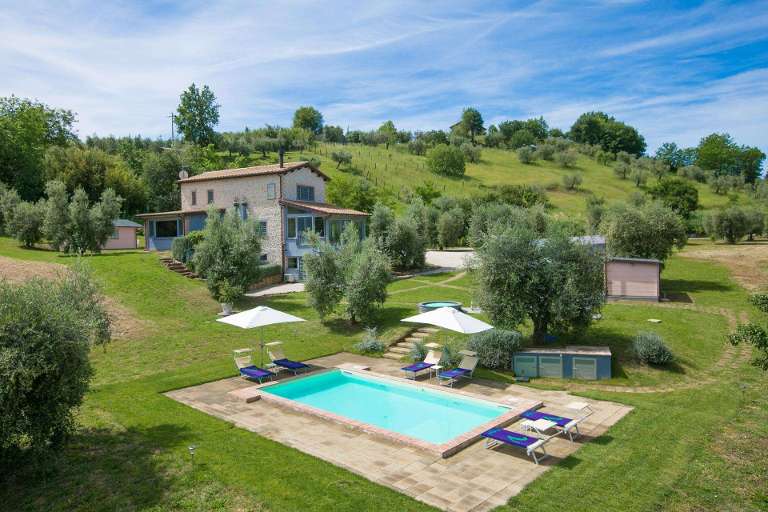 Embraced by a small olive grove on a gentle sloping hill, Casale Loredana is an artist’s hideaway overlooking the Lower Tiber Valley on the Umbria/Lazio border.

This recently restored country home successfully marries the original art and conceptual design of the Rome-based artist owner with the warmth of an Umbrian cottage. Paintings, sculpture and witty decorative details tastefully fill the bright spaces whilst the stone rendering, thick white beams and cotto floors are found throughout.

The lounge spaces make great currency of the views from their large windows and also enjoy easy access to the garden. The contemporary kitchen, stylish bathrooms, WiFi and air conditioning add modern comforts to the home.  Outside, the spacious grounds encompass a solarium, children’s pool, private swimming pool and plenty of lawn area, allowing everyone to relax and take in the surrounding views.

Hilltop Giove (700m) has a popular bar, restaurants and a number of facilities. Todi (45km) and Orvieto (30km) are within easy reach whilst medieval Viterbo, Lake Bolsena, Spoleto and the Renaissance villas and gardens of Lazio make for a splendid day out. Rome (80km) beckons too. A short drive will take you to Orte (16km) where regular, direct trains connect you to the Eternal City.

Great Things to Do Near Casale Loredana

Take a stroll up into the village of Giove (700m) for a coffee Italian style in the local bar, lunch at the pizzeria, or to get some extra supplies from the supermarket. Wednesday is market day: enjoy the local produce and the atmosphere.

This underground excavation lies directly under the Church of San Domenico, and was discovered in 1979. You can take a tour lasting one and a half hours in Italian or English that guides you through the local history with a look into Roman plumbing and even an underground Roman church with surviving frescoes.

A short drive from the house will take you to Orte where regular, direct trains will take you for a great day out in Rome. The city which has captured the imagination of visitors for millennia needs no introduction but suffice to say, a day's sightseeing will only afford a tantalising glimpse of what it has to offer. A truly awe-inspiring city, there seems to be some new marvel around every corner. The many highlights include: The Forum and Palantine Hill, St Peter's Square, the Colosseum, the Pantheon, the Trevi Fountain, the Spanish Steps and much more!

Created by the ancient Romans, the Cascata delle Marmore is a staggering 165 metres high. It is just under an hour's drive from the house. The falls are only open at certain times of the day, be sure to check opening times before going.
More about Giove More about Umbria