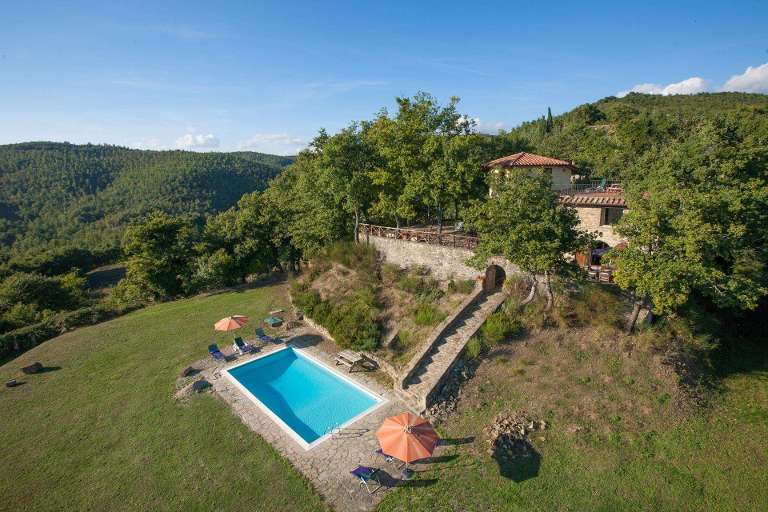 Enjoying a panoramic hilltop position in the lower foothills of the picturesque Alpe della Luna mountain range, Il Cerbone rewards its guests with spectacular views and tranquillity. Once a shrine to San Cerbone dating back to the 12th century, and visited by Saint Francis of Assisi on the pilgrimage route to Rome, the property has been lovingly restored using local materials. Now, a beautiful stone retaining wall borders the entire southern side of the house and a converted tower offers a spacious bedroom befitting any fairytale.

Every effort has been made to absorb the wonderful views from the house that gaze across the patchwork of fields into the valley beyond. An arched doorway leads from the dining terrace to the cosy living room where the traditional chestnut-beamed ceiling and terracotta floor tiles reflect the typical style of this region.

Most of the bedrooms have access to an exterior terrace from where this magnificent landscape can be further admired. A rather unique bedroom, complete with en suite facilities, has been created at the top of a ‘tower’ to one side of the property. From here, a large rooftop terrace can be accessed where a 360° vista can be appreciated as the sun bounces off the light clay-coloured tiling.

From the dining terrace, the steps begin their descent through the large arched gateway and onto the south-facing pool terrace.

The walled town of Sansepolcro (6km) has a range of shops, banks, supermarkets and cafés, plus a lively market twice weekly. You may also be lucky enough to stumble upon one of the many events or festivals held throughout the year including the traditional crossbow contest the ‘Palio della Balestra’ with the rival town of Gubbio. A visit to the Museo Civico in the town should be on every itinerary, where Piero della Francesca’s famous work ‘The Resurrection’ can be admired. Other nearby towns are in easy reach for those wishing to venture further afield with Perugia, Assisi, Cortona and Gubbio all approximately one hour from the house.

Great Things to Do Near Il Cerbone

Visit the centre of Italian Renaissance

No trip to Tuscany would be complete without a visit to the beautiful city of Florence. The enchanting historical centre never ceases to arouse your interest with its countless masterpieces, sun-baked piazzas and magnificent Renaissance and Gothic architecture. Dominating skyline of terracotta rooftops is the soaring dome of the Basilica di Santa Maria del Fiore. Alongside the Piazza runs the majestic Uffizi Gallery, home to one of the most important and famous museums in the world, which includes artworks by Botticelli, Michelangelo, Leonardo da Vinci and many other great artists.

A 25 minute drive from Sansepolcro takes you to the Riserva Naturale dell' Alpe di Luna, a beautiful landscape of rolling green pastures and jagged peaks carpeted with all manner of flora and fauna, ready to be explored. The Nature Reserve is also rich in local produce, you can go truffle hunting, pick wild strawberries, and forage for edible mushrooms throughout different periods of the year.

Just to the south of Sansepolcro, over the border into Umbria, Città di Castello has a rich Renaissance heritage and also a great tradition of crafts, particularly textiles and the art of printing. Nearby is the 'Terme di Fontecchio', a thermal spa whose waters have been used since Roman Times.

Why not spend some time in Sansepolcro, with hardly any travelling required at all! Take a leisurely stroll round the town, stopping at the Cathedral and the churches of Santo Agostino and Santa Maria delle Grazie as well as the Bishop's Palace. The town is most well known however as the birthplace of the artist Piero della Francesca and a couple of his masterpieces can be seen in the Museo Civico.

One of those undiscovered gems, Gubbio is a town that has managed to avoid being on the tourist trail but that is definitely worth visiting. It has been described as an enchanting medieval jewel where the old streets seem to march up the steep slopes of the tree-clad mountain slopes. The streets lead to a most stunning piazza that overlooks the valley. There are also churches decorated with frescoes that look as clear as the day they were painted, 'palazzi' from the 13th and 14th centuries, a Roman theatre dating from the 1st century BC, as well as modern shops and restaurants. Take the cable car from the east side of the town to the top of Monte Ingino to visit the Basilica di Sant'Ubaldo, and for some wonderful views over the Appennines.

The city of Arezzo is about 45 minutes away by car. Its famous residents have included the poet Petrarch and the painter Piero della Francesca. In more recent times, it was the setting for the film 'Life is Beautiful' by Roberto Benigni. The hub of the city is the red-brick Piazza Grande, surrounded by many beautiful buildings. Do not miss the Basilica of San Francesco to see Piero della Francesca's largest and finest work, 'History of the True Cross'.

These two towns are about an hour away and could be combined in a day trip. Perugia is a very well preserved medieval hill town with beautiful piazzas, superb architecture and many fine works of art. It is also a vibrant modern city, with lots going on throughout the year. Assisi ia a beautiful pink-hued town famous for being the birthplace of St. Francis, the patron saint of Italy, of animals and of peace. The huge and imposing Basilica of San Francesco is the main sight, but there are many other stunning churches and palazzi in the town.

is available in Sansepolcro, to explore the local area on two wheels. Or, further afield, bikes can also be hired at Castiglione del Lago, which is convenient for following the cycle trail around Lake Trasimeno. Make a day of it by stopping at a waterfront restaurant for lunch.

In Sansepolcro on the 2nd Saturday in September...

a traditional flag-waving show announces the arrival of the Palio della Balestra to be performed the following day. On the Sunday, a traditional crossbow contest is held in the Piazza Torre di Berta, with participants from Sansepolcro and Gubbio (the ‘away’ match happens in Gubbio on the last Sunday in May). People are dressed up as ladies, lords, squires and flag wavers, all in costumes reproduced from Piero della Francesca paintings. Tickets from the Tourist Office.

An important part of Italian life, the weekly open air market is full of life and bustle, a riot of scents and colour. The main Sansepolcro market is on Tuesday morning, around Piazza Torre di Berta and Via XX Settembre but there is also a smaller market in the same location on Saturday morning. Take the opportunity to try out a few Italian phrases, and stock up on lovely fresh ingredients to cook back at the villa.

is available in Sansepolcro. Whether you are regularly in the saddle or a complete beginner, a horseback trek is a lovely way to see the countryside.

may want to try the 9 hole course at Lerchi near Città de Castello, or a little further afield the 18 hole course at Antognolla Golf & Country club, just to the south of Umbertide. This Championship course was designed by the famous Robert Trent Jones Jr, and is dominated by the medieval castle of Antognolla.

by trying sailing, canoeing or windsurfing on the Montedoglio lake to the north-west of Sansepolcro.

is a famous Franciscan monastery perched high up on rocky outcrop, about 30km from Sansepolcro. St Francis of Assisi visited many times and you can see the alleged bed of rock where he slept!

The medieval hilltop town of Anghiari

is lovely to walk around. On 29th June each year, the people of the town commemorate the famous Battle of Anghiari which took place in 1440 and saw the Florentines rise victorious against the Milanese invaders.
More about Sansepolcro More about Tuscany