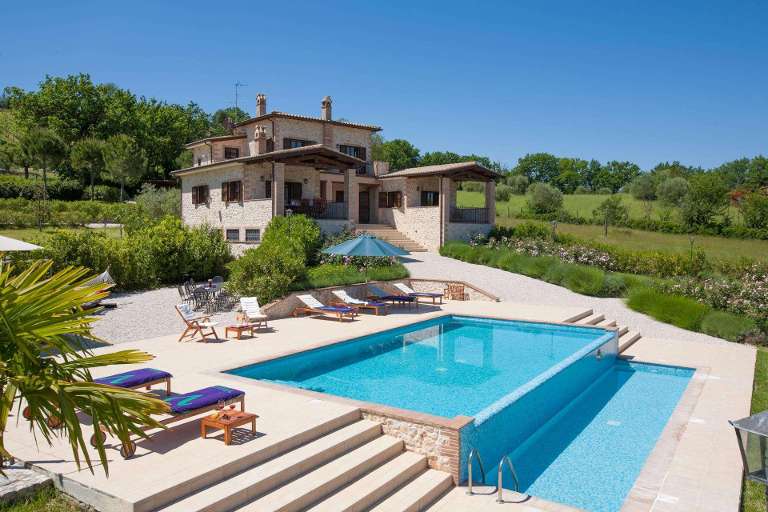 Quite an entrance awaits at Villa Martinozzi: a train of cypress trees meandering along the descending lane to a newly built country home whose every detail has been thought through to enable most indoor and outdoor pleasures at this fabulous family home. Cradled by a vast enclosed garden peppered with olive trees, fig and fruit trees, the beginnings of the Lower Tiber Valley meander away from Orvieto as it makes its way to Rome and views of the surrounding area are enjoyed from most parts of the well-tended garden.

The outdoor spaces here really are magnificent: a relaxing outdoor lounge and dining terrace complete with hammock surround a stunning infinity swimming pool with a long slender children’s pool placed directly below. A children’s play area on the opposite side of the garden will further delight younger members of your party.

An accent on outdoor living continues within the house as a covered veranda and two covered terraces, one accessible from the kitchen/dining room, and the other accessed via one of the well appointed double bedrooms line one side of the house to make the most of the breathtaking views. A very well-equipped and modern kitchen has access to a dining terrace whilst in the living room plush furniture surrounds a feature fireplace and polished wooden floors throughout are testament to the quality of the materials used to complete this delightful home.

Upstairs, a master double bedroom with en suite bathroom enjoys views of the glorious scenery from the windows and from a private balcony. The lower ground floor features a unique space for relaxation: to one side is a double bedroom whilst to the other is a television room with surround sound and comfortable seating options. A stunning Turkish bath provides a wonderful opportunity for quiet contemplation!

Around a mile up the hill is the hilltop village of Giove with a popular bar, restaurants and amenities. If you can tear yourself away from the house, nearby Todi (67km) and Orvieto (42km) make for a lovely day out or even an opportunity to enjoy their unique atmospheres after an evening meal. Other superb days within an hour’s drive can be enjoyed at Viterbo (32km), Lake Bolsena (53km), Montepulciano (92km) and Spoleto (62km). The beguiling city of Rome (100km) of course beckons too. A short drive will take you to Orte (15km) where regular, direct trains will save you the bother of driving for a great day out in the Eternal City.

Great Things to Do Near Villa Martinozzi

This underground excavation lies directly under the Church of San Domenico, and was discovered in 1979. You can take a tour lasting one and a half hours in Italian or English that guides you through the local history with a look into Roman plumbing and even an underground Roman church with surviving frescoes.

Day Trip to the Eternal City

A short drive from the house will take you to Orte where regular, direct trains will take you for a great day out in Rome. The city which has captured the imagination of visitors for millennia needs no introduction but suffice to say, a day's sightseeing will only afford a tantalising glimpse of what it has to offer. A truly awe-inspiring city, there seems to be some new marvel around every corner. The many highlights include: The Forum and Palantine Hill, St Peter's Square, the Colosseum, the Pantheon, the Trevi Fountain, the Spanish Steps and much more!

Created by the ancient Romans, the Cascata delle Marmore is a staggering 165 metres high. It is just under an hour's drive from the house. The falls are only open at certain times of the day, be sure to check opening times before going.

Stroll into the village

It is about 700m to the edge of Giove, so easily reached on foot for a morning cappucino, or lunch at the pizzeria. There is a supermarket for supplies, and the weekly market takes place on Wednesday morning.
More about Giove More about Umbria