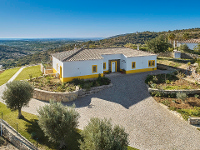 Perched on a hilltop amongst verdant hills over the coastal plain, Alto de Santo António offers stunning views towards the sparkling blue waters of the Atlantic ocean. Recently constructed in traditional Algarvian style, this spacious rural retreat is perfectly placed to enjoy the many attractions of Portugal’s most sunny region.

Inside, spacious rooms radiate from the extensive hall with modern amenities contrasting pleasingly with numerous familial art works and antique pieces. Each bedroom benefits from en suite facilities, electric shutters and guests will enjoy an ample open plan living/dining room with tremendous views over the terrace and swimming pool to the hills and ocean beyond. A contemporary and generously equipped kitchen adds a finishing touch to make for an excellent villa holiday base.

Nearby, the traditional market town of São Bras de Alportel (4.5km), is at the heart of a thriving cork industry while the bustling marketplace at Loulé (15km), is a must visit for soaking in local colour. Fabulous dune backed golden beaches are within easy reach in Faro (20km), the exclusive Quinta do Lago (25km), and cosmopolitan Vilamoura (32km), whilst for nature lovers, the expansive wetlands and lagoons of the Ria Formosa Natural Park can be explored via boat and ferry journeys from Faro (15km) and Olhão (17km).

Great Things to Do Near Alto de Santo Antonio

Learn about the traditions of the area

visit the 'Museu do Traje' museum in Sao Bras de Alportel which houses a collection of traditional Algarve clothing throughout history, showcases local traditions and also provides an exhibition on the local cork producing industry.

The village of Estoi..

is famous for its Roman ruins at Milreu dating from the 2nd Century. They are about a 10 minute walk out of the village. The 19th Century Estoi Palace and Gardens (now a five star hotel), are also well known and attract visitors to see the ornamental fountains and the fine examples of traditional blue and white Portuguese tiled terraces.

and witness craftsmen at work in many traditions such as copper, tin, brass and wrought iron mainly in the streets around where the market is held. Other items manufactured locally are shoes, cane furniture, pottery, wax candles and harnesses. Many a fascinating hour can be spent watching the craftsmen plying their trade.

The Algarve is a stop off point for migrating birds and as such is a haven for birdwatchers. One of the most important sites is the Parque Natural da Ria Formosa, stretching from Faro eastwards, these expansion wetlands and lagoons are considered to be amongst the most important in Europe in terms of birdlife. Amongst the species that have been spotted are white stork, flamingo, hoopoe, stone curlew, Caspian Tern, Iberian Chiffchaff and many more..…..

The village of Guia

is renowned for the number of restaurants famous for serving the typical Algarvean dish of chicken piri piri.  Naturally, they all claim to be the best but you can be assured that they are all very good and represent excellent value for money.

The delightful town of Tavira is well worth exploring

as it is considered by some to be the most charming town in the region. It is sited on two sides of the River Gilão and spanned by an elegant Roman bridge.  As you wander around the narrow cobbled streets, take note of the 'portas de reixa', which are Moorish style lattice panelled doors.

Capture the atmosphere of Faro

steeped in history, by taking a walk around the old town, which is encircled by medieval walls. Evidence of the rich history of the town can be found in the Museu Arqueologico including a Roman floor mosaic and a collection of Moorish oil lamps. A visit to the Cathedral is a must or simply meander along the marina and nearby gardens.

on the banks of the river Guadiana, which forms the border with Spain and explore the nearby twin castles of Castro Marim which were strategically placed to protect the settlement for many centuries.

For a day out with a difference,

visit the Parque Natural da Ria Formosa, which stretches along 37 miles of coastline east of Faro from Olhao to Tavira.  It was created to protect the ecosystem of the area and is an important breeding area for wetland birds.

which has reputedly the most powerful lighthouse in Europe. To watch the sun setting here is a truly memorable experience.

Brush up your tennis skills

at one of the many tennis centres and academies in Vilamoura and Vale do Lobo. Take your own racquets. If you are lucky you might be there when some big names are in town to participate in a tournament.

Visit the World of Sand

This international sand sculpture festival is usually held between May and October. Reportedly the biggest sand city in the world, this fascinating and spectacle will amaze all members of the family!  There are sand sculpture activities for children and it is illuminated by night. Location on EN125 between Porches and Lagoa, opposite the Noel Internartional School.

Trips leave from Albufeira, Vilamoura Marina, Faro, Olhao and Tavira to the different beaches and the Islands. It is also possible to charter a yacht from Vilamoura Marina and enjoy a day sailing around the beautiful coastline.

The castle town of Silves is worth spending a day exploring.

The Cathedral, built in red stone, and the Moorish castle both offer beautiful views over the orange and almond groves below.

don’t forget to sample the many different types of port wine!
Chilled white port makes an interesting aperitif and can be a serious rival to sherry.
Accompanied by some delicious local olives, it’s a great way to preface a supper of freshly grilled sardines!

Go to the beach!

You can catch a boat from Olhao to one of the small islands just offshore where the uncrowded white sandy beaches are reportedly some of the best in Portugal. There are beach bars and restaurants available.

Explore the town of Lagos

famous for its sea faring traditions and the former capital of the Algarve.Take a rest in the Praça Infante Dom Henrique and enjoy a well earned cool drink.

There are several along the Algarve coast, the nearest to the property being Aquashow Algarve at Quarteira www.aquashowpark.com. Open daily from 10am. It is also a bird park with birds of prey and tropical birds such as parrots and macaws.