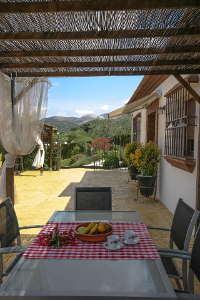 Just 1km from Ronda’s atmospheric southern quarter of San Francisco, this beautifully presented home looks out across the beautiful slopes of the Serranía de Ronda towards the town itself, a particularly stirring sight at night when the ancient monuments are lit up and highlighted against the whitewashed walls and terracotta rooftops of the surrounding buildings.

This is an enviable location that offers the best of both worlds.  Surrounded by gently undulating fields peppered with the silvery-grey leaves of olive trees and enjoying views towards a range of higher slopes beyond, its picturesque garden and spacious dining terrace offer the scenic and restful ambience of a rural setting and yet just a 20 minute walk away, via a series of country lanes, are the lively streets and squares of Ronda.

Nestling just below the old city walls, the almost village-like quarter of San Francisco is home to typical streets of whitewashed homes, bedecked with flower-filled wrought iron balconies. At its hub is a cobbled square, bordered with houses, local shops and one of Ronda’s most atmospheric restaurants.  This square is only 2km from the house and lies just in front of the ornate Moorish gateway that leads the way through the walls up into the old part of the city.

When not exploring the historic delights, charming restaurants and enticing shops of this most stunning of southern Spanish towns, guests will be able to enjoy the smart facilities of what is clearly a much-loved residence.  Neatly clipped hedges and beautifully tended flowerbeds surround the swimming pool and its adjacent lawns, olive trees provide dappled shade and a pen of hens sits neatly alongside the lower boundary.  Displaying the exquisitely carved wooden furniture for which Ronda is famed, wonderfully plump seating for lounging and an elegant colour scheme of warm hues, the attractive interior is stylish and comfortable, with the kitchen, dining area and principal bedroom all benefitting from the sweeping views.

Great Things to Do Near El Bocao

The nearest part of Ronda to El Bocao is known as the “Barrio San Francisco”, just a short walk of around 20 minutes down the lane from the house brings you to the most charming part of Ronda. Just outside the city walls of the old town, the “Barrio” is almost a village in its own right. The charming square is bustling with activity, where you can find an array of tapas bars and restaurants. Try Bodega San Francisco for typical tapas or Restaurante Almocábar for a top class meal (booking recommended).

Indulge in some deep tradition

Flamenco is passionate and seductive, mysterious and misunderstood. A culture that has been burning in Andalucía for hundreds of years. Enjoy a chance to see some Flamenco dancing at its best with truly mesmerising guitar performances and song at El Quinqué, near to the bullring Ronda. https://www.elquinqueronda.com/

A date not to be missed in Ronda, “Ronda Romantica” in May. The whole town centre comes alive with the Recreation of the Romantic Era. A genuine encounter with the legendary past of this land and its identity. There are parades, battles, markets and parties galore as everyone is dressed up as old age travellers, horsemen and Bandits of the Serrania de Ronda. For the old and the young it’s a great Festival in Ronda, normally held in May.

Granada can be reached in just over two hours drive from Ronda. Explore the old Muslim quarter of Granada city, the Albaicín, then wander around the mesmerising Alhambra Palace.  Entrance tickets are timed, so you can book in advance and plan your day in this lovely city accordingly. Tickets must be booked well in advance, so book online before your holiday to avoid being disappointed! https://tickets.alhambra-patronato.es/en/

See the sights on two wheels

A local company offers cycling day trips with fully qualified British Cycling guides. There are a variety of different trips, from easy country rides to more difficult mountain climbs for more experienced cyclists. Contact Hike and Bike before your holiday to arrange dates with them. http://www.hikeandbikeholidays.com/cycling-spain/day-trips

Go down into the gorge

You cannot leave Ronda without going down to the bottom of the gorge. From the square in the barrio take the street downhill. It's a climb uphill afterwards, but well worth it!

Buy some typical dulces, cakes from the nuns

The sisters in the convent at Ronda, are famous for baking special biscuits and cakes for Navidad, Christmas, which the enclosed order sells through a ‘turno’, or revolving hatch, in the door. There are pastries and cakes made all year too.

Ronda is close to the Natural Park Sierra de Grazalema. Dotted around this magnificent landscape there are many small white washed villages to explore. Grazalema for example is a picturesque drive and is a charming place to explore the narrow streets with balconies and windows filled with colourful pots of geraniums. It's a great place for walkers and bird-watchers alike too.

Take a day out to Seville

Seville is Andalucía’s capital. It has some of the region’s most beautiful monuments. Easily reached, using the park and ride system by metro, taking the strain from trying to park in a busy unfamiliar city. Exit the metro in “Puerta Jerez” and you will find yourselves in the very heart of the city, close to the Cathedral. It’s a flat city so walking is easy, cycles can also be hired for a day, horse and carriages are plentiful, or “hop on – hop off “city open top bus tours can be easily found.

Why not make an evening special and treat yourselves to a meal in a michelin-starred resturant. Benito Gomez and his team at Resturant Bardal have just been awarded in 2017 with a Michelin star. The restaurant is in the centre of town close to the bullring. Booking certainly recommended!http://restaurantebardal.com/home/If you prefer something less formal, Benito also has a popular Tapas Bar, Tragata, also in the town centre.

Visit the Roman ruins at Acinipo, a few kilometres outside Ronda. This was an important town which minted its own coins, and the theatre is still well-preserved. There are also the remains of a Bronze Age settlement at the entrance.

The recently opened Hotel Catalonia Ronda in the centre of town, has a wonderful roof top terrace and bar. You can enjoy a relaxing evening tipple whilst enjoying fabulous views over the bullring, old town and the Sierra de Grazalema mountains beyond.

Featured recently on many travel and cuisine TV programmes, Cadiz is just an easy drive away. This small city known locally as "la Isla", the island, it is completely surrounded by the sea. Its majestic Cathedral sits along the shores of the Atlantic coast. Narrow streets full of charm and old-world character can easily be explored on foot. Visit the lively fish market and be amazed at the fresh tuna caught locally.  Then spend the afternoon on the beach relaxing!

The heart of the old Moorish town of Ronda is a delightful labyrinth of picturesque little streets littered with museums, such as the municipal museum in Palacio de Mondragón, churches, convents and noble residences.

This impressive cave, with its even more impressive wall paintings, is just beyond the village of Benaoján.  The cave is open every day of the week and is best to book in advance. The telephone number is 0034 687 13 33 38, calls only. www.cuevadelapileta.org  Two guides take candlelit tours of up to 25 people in each group.