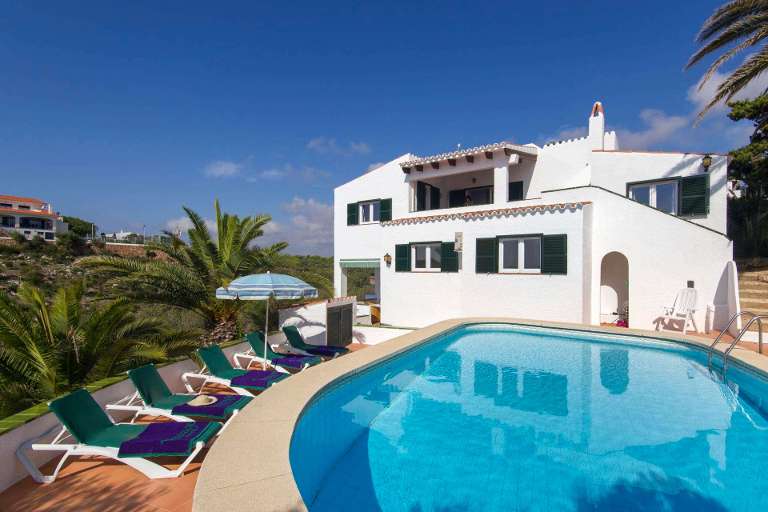 Enticing sea views are yours to enjoy from the south facing terraces of this recently refurbished coastal residence, which sits amidst attractive grounds off a leafy residential lane just 300m from the pretty beach of Binibeca with its waterfront restaurant and golden sands.

Imaginatively designed over various different floors, this is a smart and beautifully presented home. Linking bright rooms that are filled with light thanks to an enviable sunny aspect, steps lead up and down the various levels and add a delightful sense of character and charm whilst the updated décor is crisp and contemporary.

On the upper floor, a refreshingly bright living room displays stylish furnishings, a colour scheme reflecting the tones of the nearby sea and patio doors to a covered dining terrace from where views sweep across the pool and over treetops and rooftops to the ocean. On the lower levels, pretty bedrooms enjoy the same light and airy ambience and a cosy television room incorporates an impressive selection of entertainment equipment.

Encircling the house, an attractive combination of covered patios, terracotta tiled terraces and colourful Mediterranean flowerbeds provide an idyllic setting for outdoor living and swimming in the pool. Steps lead the way from here up to the entrance gate from where a pleasant stroll down the road reveals the golden sandy beach and its adjacent restaurant, a little further on from which are some pleasant seafront restaurants and a mini supermarket.

For those wishing to explore the area, this picturesque south eastern corner of the island is fringed by the most scenic of beaches whilst the intimate squares, ancient narrow streets and stunning harbour of Maó are just 6km away.

Please note that in addition to the property rental there is a local tourist tax to pay. We collect this tax prior to your departure and remit it on your behalf. €2.00 (€2.20 incl. IVA) (£2) per night for the first 9 nights,€1.00 (€1.10 incl. IVA) (£1) per night for each night thereafter.
Where two or more prices are shown for the same date, you pay the amount shown for the number of people in your party.
When the small party rate is paid not all beds will be prepared.

Great Things to Do Near Casa Sueños

Walk along the coast to Binibeca Vell

which replicates an old fishing village. Explore the alleys and little streets where there are bars, restaurants and interesting shops tucked away. Don`t forget your camera as there are lots of photo opportunities here.

Spend a day on the beach

With white sand and crystal clear water, it will be hard to drag the children away.

and take a walk around the old quarter, visit the church and the windmill which is now a museum.

Have Tapas for Lunch

at La Rueda in Sant Lluis and eat alongside of the locals.

Go to the famous Bucaneros Bar

on the beach at Binibequer. It is possibly the only place on the Island where you can dangle your feet in the sea whilst having a drink.

A day at the races

The tradition of trotting races dates back almost 100 years in the Balearics and is not practised anywhere else in Spain. An afternoon at the races is a must for any lover of equestrian sports and it is very child friendly. The Maó Municipal Hippodrome, on the Maó-Sant Luis road, holds races on Saturdays from 17.30 (May to October). Grab a table, order yourself a drink and place your bets!

with a visit to Trepuco which is just off the road between Sant Lluis and Mao. Walk under the archways and explore the buildings that were once home to prehistoric man.

Visit the beach at Biniparratx

as a change from the beach at Binibequer. The beach is completely unspoilt and beautiful. Make sure you don't forget your mask and snorkel.

Spend a day in Mao

exploring the harbour. Take a trip on one of the glass bottomed boats and see where the British left their mark on the Island. After the boat trip take time to walk along the harbour front and have lunch in one of the many restaurants whilst enjoying the views.

While visiting the harbour..

take some time to sample the Xoriguer gin and liqueurs at the 18th century distillery. Although it is not possible to tour the factory, it is possible to see enormous copper stills, bubbling to produce the spirit. The gin was first distilled in Mahon to cater for the tastes of the thousands of soldiers and sailors who were stationed in Menorca when it was under British control in the 18th Century.

Let the children make a splash

at the brand new water park at Biniancolla

Take a nocturnal tour of the Castillo de San Felipe

which is on the south side of the port on the road to Sant Esteve. The castle is now in ruins but over 5 kms of underground tunnels remain. After a brief introduction, everyone is given an oil lamp and the tour really comes to life as you explore the underground galleries with live actors representing scenes from the past. It`s an interesting tour that is also fun for the whole family.

Take a guided tour and find out how the wines are made. Afterwards you can try some of the wines, the famous goat's cheese marinated in red wine and the wine based jams and preserves. There is also a restaurant on the site that serves a variety of Menorcan dishes and is open for breakfast, lunch and dinner.

The Menorca Horse Riding centre, just outside of Es Castell, offer rides to suit all levels of ability and ages. There are treks along country lanes for complete beginners to half day trips along the Cami de Cavalls to the beach at Es Grau for more experienced riders.

Go for tapas in Mao

The Bar Nou, next to the Town Hall, serves a variety of imaginative and delicious tapas. The chicken wings with soya and honey sauce are not to be missed.

There are tours of the Mahon Theatre every Tuesday at 10.30am. They only last around half an hour but it is worth having a look at this charming and beautiful builiding, which is on Calle Deia (look out for the statue of a lady outside). Have a look at what`s on while you are there as the theatre has a varied programme.

Spend a morning in Mahon at the Museo de Menorca

the museum of Menorca, which includes a video of the history from pre-history to modern times, as well as artefacts and objects, all well set out and described, and housed in the cloisters of a former monastery. Don't worry - it's all in English. Admission is free on Sundays, and for pensioners.

Ciutadella celebrates its main festival in honour of its Patron Saint, Sant Joan, on the 23 and 24 of June. Over the two days, following Menorcan tradition, the town's streets and squares are filled with horses, music, religious ceremonies, hustle and bustle, merry-making and people. Enjoy the lively atmosphere, enjoy a `pomada` or two, dance in the streets and celebrate along with the locals.

from the beach at Binibeca and explore the nearby sea caves.