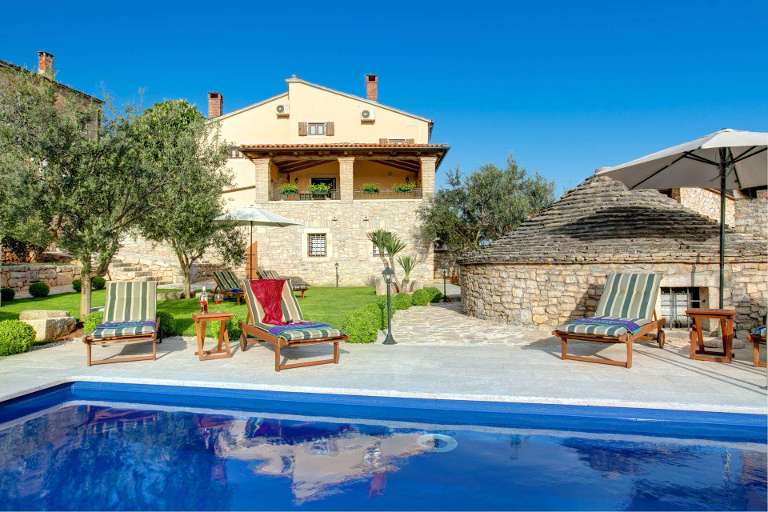 Just a short stroll (230m) from amenities including a bakery, two minimarkets and an excellent pizzeria, this wonderfully appealing town house in the heart of Višnjan boasts impressive views across open countryside to the sea and is perfectly situated for exploring Istria.

Outside a lawn and gorgeous sun terrace invite indolence while a perfectly preserved ancient circular kažun (shepherd’s hut) next to the pool houses the summer kitchen/barbecue.

The coast at historic Porec is just 12km, the spectacular picture-postcard scenery around Motovun within a 20 minute drive and Pula is 40 minutes.

Great Things to Do Near Adriana

Go To Market at Motovun

There is no better way to experience Istrian daily life first hand than with a visit to the market. Motovun’s is held on the third Monday of every month and sells fresh fruit, vegetables and other foodstuffs along with local handicrafts and souvenirs.

Whilst there, take a walk around the town walls and wonder at the fabulous views. The forest land you see in the Mirna Valley is rich in truffles, a revered delicacy in Istria. Motovun’s insignia, the propeller, was invented by one of its former inhabitants, a Czech from Bohemia called Josef Ressel who worked in Motovun as a forest warden. He tested his invention on the Krka river in Slovenia and then in the open sea off Trieste.

Pay a visit to Savudrija on the far north west coast of Istria. Here you will see the tallest lighthouse on the Adriatic. Built in 1818, it has been beautifully preserved and is still operating. The locals also maintain an old tradition of keeping their fishing boats hung on wooden constructions on the beach.

Go For A Bike Ride!

There are a number of dedicated cycle trails all over Istria, enquire at your local tourist office for a map and information on bike hire locally. What better way to enjoy the scenery?

is a charming hilltop village offering magnificent views. Wander around its largely deserted lanes and look for the Romanesque gates set in the town walls and, just inside, its loggia dating from 1549. Nearby is the church of Sveta Marija, a square structure with portico and belltower and frescoed walls inside. Notable amongst the other churches is that of Sveta Eufemija with its 14th century crucifix, though largely rebuilt in the 1500’s. Look for the Masonic headstones with their ‘secret’ symbols, some with British names.

offers a mini market and café bar, the Monte Carlo, both with easy parking. But stroll down into the old town for stunning views across to Motovun and look inside the Romanesque church of St Barnabus which dates from the 12th century. 15th century frescoes and Glagolitic graffiti are also much in evidence and these were restored and cleaned in 2000. Vižinada was the birthplace of renowned ballerina Carlotta Grisi, star of ballet stages in London, Paris, Milan, Vienna and St Petersburg during the mid 19th century. Cultural events occasionally take place in the town commemorating her life.

You’ll soon appreciate the Italian legacy in the architecture, the food and the place names, well make a visit to nearby Završje which has its own leaning tower! The belfry here, 22 metres high, has an inclination of 40 centimetres. Take your camera as this is amongst Istria’s prettiest, most aesthetically pleasing villages.

Visit Oprtalj, due north of Motovun, an impressive medieval hilltop town of narrow cobbled streets, small piazzas and buildings in baroque and gothic style. This truly is an atmospheric spot! Enjoy a meal at the konoba where, locals say, the best truffle meals in Istria are served. High quality locally produced wines, olive oils, pršut (hams), honey and truffle related products are sold at the shop under the loggia.

Try and catch a performance at Pula’s Amphitheatre, known locally as the Arena. Artists such as Simply Red, Zucchero and Norah Jones have staged concerts here in recent years and it is home to the annual Pula Film Festival usually held in late July. What better venue?

From Oprtalj, take the road to Motovun but turn left shortly after leaving Oprtalj signposted Bencani and Ipši. When you reach Ipši, look for Claudio Ipša on the right hand side – this is the name of the olive oil producer. A very personal service awaits you to help you choose your olive oil, truffle products are also on sale. Tel. 052 644 216.

Asparagus (šparuge) grows wild throughout Istria and is ready for picking in the spring. You will see stalls at the roadside offering bundles of freshly collected examples, selling for just a few kuna. The locals braise the tops in olive oil until tender and then add eggs, salt and pepper. The result? Delicious scrambled eggs (fritaja).

Head for the Beach at Dajla,

on the coast between Novigrad and Umag. Originally a little fishing harbour, it has a sheltered rocky beach.

...is a great destination for a lazy lunch and a wander. It affords wonderful views out to the Adriatic Sea, inland towards the Ucka Mountains, or north to the Julian Alps but was abandoned by its mainly Italian inhabitants after World War II. 20 years later, it was re-established by a number of artists and craftsmen who exhibit their work in galleries, studios and workshops. Pictures, drawings, pottery ceramics, hand made jewellery and other crafts are displayed in abundance.

Head north to the medieval hilltop town of Grožnjan. Since 1969 the town has been the International Cultural Centre of Musical Youth. Strolling around Grožnjan at any time of year, you’re certain to hear the echo of music being practiced or performed whilst from the beginning of June through to the end of September there are many evening jazz and classical concerts. In fact, Georgie Fame played here recently.

Hum - The Smallest Town In The World...?

Head east towards the U?ka Mountains to the town of Hum, a fine example of a small medieval town situated on a ridge dominating the surrounding landscape. It has town walls and gate, a loggia and a parish church. Legend suggests that some building materials were left over after a project of town building in the Mirna Valley, enough to create a miniature town, hence Hum was born.

Driving around Istria, look for the kažun, a round beehive-shaped field hut built using the dry-stone technique, without any mortar or concrete. The material for this was usually collected by cleaning fields of excess pieces of stone. Farmers and peasants used them for shelter and for guarding vineyards or olive groves as well as for storage of agricultural implements. The kažun has become emblematic of traditional Istria and can be found all over the region these days, however they were traditionally prevalent in the south and west.

The Glagolitic Script was the first Slavic alphabet, which was used for many years in Croatia. The so-called Glagolitic Alley is a 7 kilometre stretch between Ro? and Hum where 10 monuments have been erected in recent years dedicated to this script and commemorating many Istrian Glagolitic scholars.

Istria’s northern border is with Slovenia. From Buje in northern Istria, either take the road into Slovenia via the border point at Kastel or cross the border at Plovanija-Secovlje. From here you might like to explore some of Slovenia’s pretty coastal towns such as Koper, Izola, Piran or Portoroz, all within 30 minutes of the border. You’ll need your passports and some euros. If you picked your hire car up in Croatia, you’ll need to check with your supplier that you can cross the border with it.