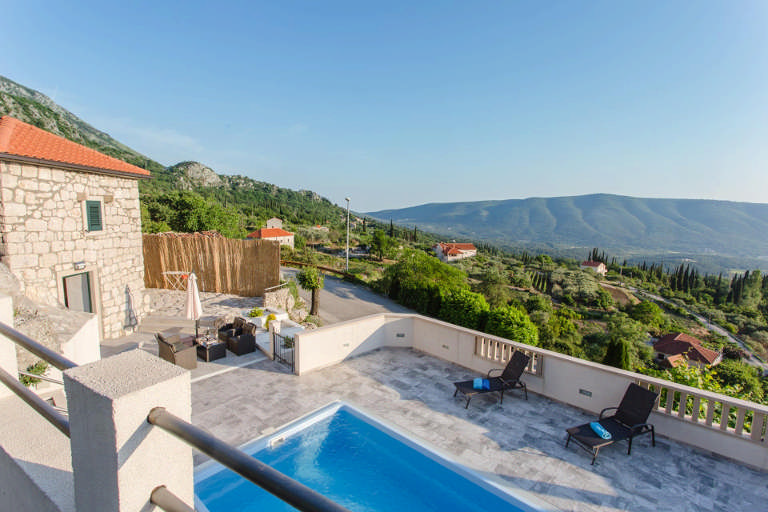 Infused into the rock face of the rolling hills of the Konavle valley, surrounded by lofty cypress trees, this delightful retreat enjoys captivating views across the rural landscape towards the Adriatic Sea. Recently built and cleverly designed inside and out, comfortable accommodation is complemented by terraced grounds and a lovely swimming pool, that honeymooners or a couple are sure to enjoy.

Inside, modern furnishings sit alongside a facade of cool mountain rock and exposed stone walls, providing the backdrop to an informal open plan living area and kitchen. A staircase leads up to the mezzanine double bedroom with en suite shower room and windows that benefit from the wonderful views beyond.

Following the natural contours of the hillside, a stone pathway leads to a private garden, where peaceful waterfalls splash into a clear pond and shaded seating creates a peaceful haven in which to relax and savour the view. A little patio to the side of the house provides the ideal spot for pre-dinner drinks, whilst a wide terrace and shaded dining area with built-in barbecue and outdoor bathroom surround the swimming pool.

A 300m stroll downhill brings you to a local bar and shop selling essentials.  Head to the River Ljuta (6km) and enjoy lunch or dinner at a riverside restaurant, popular with the locals for its selection of traditional homemade specialities. The delightful small town of Gruda (7km) has a couple of supermarkets and a selection of cafes,  restaurants and shops, while further afield the fabulous UNESCO city of Dubrovnik (34km) is a must visit.  The clear waters of the Adriatic sea can be enjoyed at Molunat (18km), a charming fishing village with a beach and cafes.

Great Things to Do Near Duka

Recently reopened to the public after a painstaking 50 years of renovation, this fort was built to protect the hinterland from invading Turks from the Ottoman Empire and the Venetians of the Venetian Republic.

Just north of Dubrovnik is the pretty coastal village of Zaton. Formerly a popular dormitory town of Dubrovnik aristocracy and wealthy merchants, it features a number of Renaissance summer villas along its waterfront. These days it has a lazy, bohemian feel, with a number of galleries and, locals say, one of the best restaurants in the area.

This is also offered from Kojan Koral in Popovici. The half day tour runs to Cilipi for a visit to the traditional Konavle house there and continues through the Konavle countryside crossing the river Ljuta a couple of times before picking up the route of a disused railway line and returning to base for a typical, traditional Croatian snack.

Horse Riding in the Konavle

A visit to Trsteno, just north of Dubrovnik, is worthwhile to view the remarkable Arboretum established there about 500 years ago. It is said that seafarers and merchants from here were encouraged to bring back plants, saplings and seeds from their worldwide travels to be planted in this botanic garden which of course have established themselves over the centuries. The entrance to the Arboretum is guarded by a huge 500 year old plane tree.