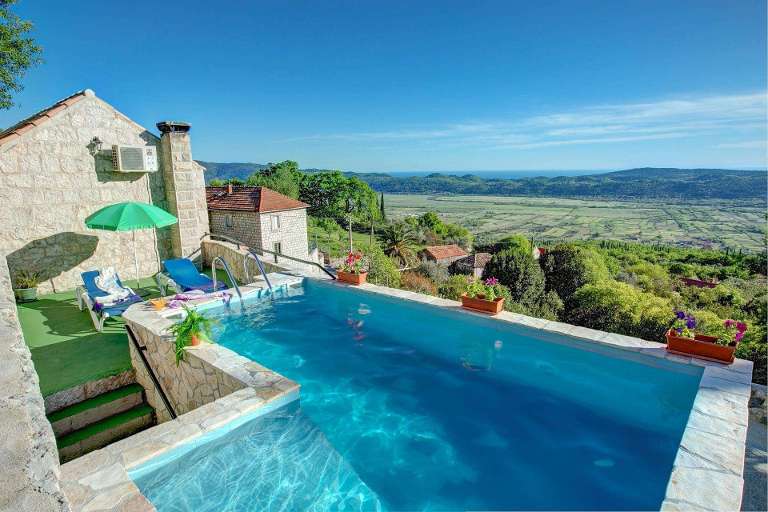 Charming, appealing, with impressive panoramic views across the verdant Konavle Valley, this compact country hideaway makes a lovely holiday base. Attractive beamed ceilings and walls of part-exposed stone add character to the comfortable interior while independent access to each sleeping area enhances privacy for sharing couples or smaller parties.

A long covered entrance/dining terrace to the front and the private pool/sun terrace to the side at first floor level offer a choice of appealing options from which to absorb those wonderful views across the countryside to the sea.

All amenities are found at Gruda (9km) or Cilipi (7km) where every Sunday morning (Easter to October) there is folk dancing in the church square.

Many great walking and biking trails criss-cross the surrounding hills and lanes.

Great Things to Do Near Ivana

Recently reopened to the public after a painstaking 50 years of renovation, this fort was built to protect the hinterland from invading Turks from the Ottoman Empire and the Venetians of the Venetian Republic. Visitors are rewarded with fantastic views over the Konavle valley to the Adriatic Sea.

A visit to Trsteno, just north of Dubrovnik, is worthwhile to view the remarkable Arboretum established there about 500 years ago. It is said that seafarers and merchants from here were encouraged to bring back plants, saplings and seeds from their worldwide travels to be planted in this botanic garden which of course have established themselves over the centuries. The entrance to the Arboretum is guarded by a huge 500 year old plane tree.

Horse Riding in the Konavle

This is also offered from Kojan Koral in Popovici. The half day tour runs to Cilipi for a visit to the traditional Konavle house there and continues through the Konavle countryside crossing the river Ljuta a couple of times before picking up the route of a disused railway line and returning to base for a typical, traditional Croatian snack.

Just north of Dubrovnik is the pretty coastal village of Zaton. Formerly a popular dormitory town of Dubrovnik aristocracy and wealthy merchants, it features a number of Renaissance summer villas along its waterfront. These days it has a lazy, bohemian feel, with a number of galleries and, locals say, one of the best restaurants in the area.

Take a boat trip from Cavtat to Dubrovnik

The easiest way to visit the city. Board one of the boat trips leaving from Cavtat for a scenic cruise along the coast and arrive right in the heart of the Old Town. The journey takes around 30 minutes and gives plenty of photo opportunities en route.

Visit the little known beach of Sveti Jakov for spectacular views of the old town of Dubrovnik. It is situated at the eastern side of Dubrovnik Old Town, about a mile away, in a protected little bay. It has its own restaurant and cafe bar.

Cadmos Village adventure park features three levels and 4 zip-lines, fields for archery and paintball, giant swing, bicycle service and the first treehouse in Croatia. Activities are suitable for families and children, as well as adventure seekers. Cadmos Village is situated in the picturesque Konavle region near the village of Komaji, hidden in unique oak woods. There is also an eco-restaurant offering local Istrian cuisine, run by its own solar system!

There are many wineries in the area offering excellent local wines to try and also homemade liquors. The most famous grape in the region is the Malvasia which is a Konavle indigenous variety. It is not certain how it arrived in the area, whether it was brought over by the ancient Greeks or actually originated from this region. A well chilled glass of Malvasia goes very well with the traditional style of Istrian cooking - baking meat slowly under a stone bell. Besides Malvasia other white wine varieties such as, Marastina and Posip are very well known just as excellent red wines like; Plavac, Merlot, Cabernet, Cormorant, Kadarun and other varieties.