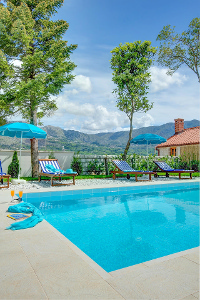 Being able to include this comfortable and attractive two bedroom property in our portfolio makes us very happy indeed! Sele is a great example of that much sought after but rarely found combination; an appealing holiday home with a lovely private pool just a short walk from good restaurants and amenities in the charming little town of Gruda.

Bright and modern with contemporary facilities that include air conditioning, WiFi and well-appointed kitchen, visitors are sure to feel immediately welcome. Outside the private pool, edged by lawn and ample sunbathing space, proffers an impressive view across to the craggy hillsides of the Konavle valley towards the iconic local landmark, Sokol Castle (look for the flag fluttering high and proud above the ramparts). Mature trees create sun-dappled shade while the large in-built barbecue, pergola covered dining terrace and raised seating/dining/cocktail terrace create further alluring focal points.

Gruda boasts two very good restaurants, various friendly café/snack bars, several well-stocked mini markets, a butcher, a greengrocer plus a smattering of other local traders including a particularly interesting arts and crafts shop near the head of the town.

And do not try to resist the lure of Dubrovnik! This fascinating and unique World Heritage Site is just a 30 minute, scenic coastal drive away and, quite simply, makes for the most wonderful day trip. A similarly timed jaunt in the opposite direction brings you to the border with Montenegro and a perfect opportunity to sample the culture, history (and cuisine) of one of mainland Europe’s most southerly countries.

Great Things to Do Near Sele

This remarkable building is dedicated to the shipowning Racic family of Cavtat whose members all died from an outbreak of Spanish influenza. Constructed between 1920-22, it was built entirely from white stone sourced from the island of Brac, the first architectural work by Croatian sculptor Ivan Meštrovi? (1883-1962). No other building material was used other than bronze for the door, bell and angel.

Just north of Dubrovnik is the pretty coastal village of Zaton. Formerly a popular dormitory town of Dubrovnik aristocracy and wealthy merchants, it features a number of Renaissance summer villas along its waterfront. These days it has a lazy, bohemian feel, with a number of galleries and one of the best restaurants in the area.

A visit to Trsteno is worthwhile to view the remarkable Arboretum established there about 500 years ago. It is said that seafarers and merchants from here were encouraged to bring back plants, saplings and seeds from their worldwide travels to be planted in this botanic garden which of course have established themselves over the centuries. The entrance to the Arboretum is guarded by a huge 500 year old plane tree.

Horse Riding In The Konavle

This is also offered from Kojan Koral in Popovici. The half day tour runs to Cilipi for a visit to the traditional Konavle house there and continues through the Konavle countryside crossing the river Ljuta a couple of times before picking up the route of a disused railway line and returning to base for a traditional Croatian snack.

Recently reopened to the public after a painstaking 50 years of renovation, this fort was built to protect the hinterland from invading Turks from the Ottoman Empire and the Venetians of the Venetian Republic.