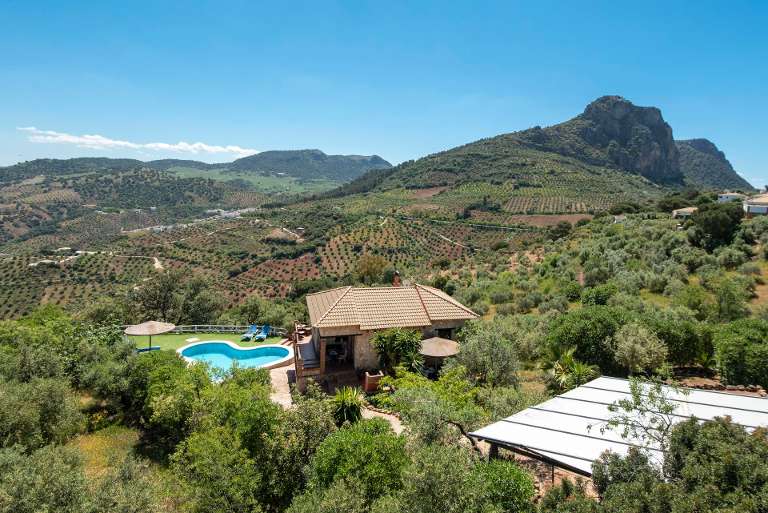 If you are looking for a cosy rural retreat with sweeping views across the undulating countryside of this stunning corner of Andalucía, then Casa Acogedora is the place for you!

Just 2.2km from the unpretentious, friendly whitewashed village of El Gastor, Casa Acojedora is a perfect holiday cottage from which to explore the charming local area. Its unique pool area benefits from wonderful views of the nearby peaks of El Algarín and Las Grajas, where a network of walking trails and an abundance of wildlife attract walkers and bird-watchers keen to soak up such spectacular surroundings. Dotted around the grounds are enticing areas of seating offering shaded spots in which to relax with a refreshing drink whilst admiring the varied vistas towards the pretty ‘pueblos blancos’ and the typical Andalucían landscape beyond.

The compact, charmingly rustic interior has a comfortable cosy feel, ideal for a couple or small family group. Adorned with caringly collected traditional antiques and displaying typical beamed ceilings, both the living area and main bedroom benefit from patio doors that open out onto the terrace which runs along two sides of the property. From here, you can enjoy mesmerising views over the silver leafed olive groves to the terracotta rooftops of El Gastor.

For those who wish to explore further afield, the historic town of Ronda with its famous gorge is just half an hour away by car whilst the many enchanting whitewashed villages that are dotted around the National Park of Sierra de Grazalema are within easy reach.

Great Things to Do Near Casa Acogedora

If you like walking trails, then this is the area for you. The famous Grazalema National Park is a just short drive away but even El Gastor has its own attractions for walkers. The twin peaks, Tajo Algarin and  Sima de las Grajas,  behind the village can be easily reached on foot and the views from there are incredible.

Seville is Andalucía’s capital. It has some of the region’s most beautiful monuments. Easily reached, using the park and ride system by metro, taking the strain from trying to park in a busy unfamiliar city. Exit the metro in “Puerta Jerez” and you will find yourselves in the very heart of the city, close to the Cathedral. It’s a flat city so walking is easy, cycles can also be hired for a day, horse and carriages are plentiful, or “hop on – hop off “city open top bus tours can be easily found.
Dont miss the Alcázar palace and its beautiful gardens.

Visit the jewel in the crown - The Alhambra Palace in Granada

Granada can be reached in just over two hours’ drive from El Gastor. Explore the old Muslim quarter of Granada city, the Albaicín, then wander around the mesmerising Alhambra Palace.  Entrance tickets are timed, so you can book in advance and plan your day in this lovely city accordingly. Tickets must be booked well in advance, so book online before your holiday to avoid being disappointed! https://tickets.alhambra-patronato.es/en/

There is fascinating wild life to discover in this area, being so close to a large National Park, Sierra de Grazalema. From the terraces and pool areas of Casa Acogedora you can spot many Griffon Vulture and large Eagles, as well as many smaller birds.

El Gastor is close to the National Park Sierra de Grazalema. Dotted around this magnificent landscape there are many small white washed villages to explore. Grazalema for example is a picturesque drive and is a charming place to explore the narrow streets with balconies and windows filled with colourful pots of geraniums. Hidden squares are alive with small bars and cafes, great places to enjoy a cool drink or sample some of the local dishes.

Featured on many travel and cuisine TV programmes, Cadiz is just a 90-minute drive away. This small city known locally as "la Isla", the island, it is completely surrounded by the sea. Its majestic Cathedral sits along the shores of the Atlantic coast. Narrow streets full of charm and old-world character can easily be explored on foot. Visit the lively fish market and be amazed at the fresh tuna caught locally.  Then spend the afternoon on the beach relaxing!

The Poyoyo cheese, an artisan cheese of the region, is one of world’s finest cheeses. It is award winning worldwide, made with the milk of the Poyoyo goats, native to the area. Sold in many shops locally, it’s easy to find. Grazalema village is a great place to explore the enticing array of small gift shops and delicatessens selling cheese, wine, olives and hams from the region.

Get on two wheels

The Via Verde or Green Way runs for 36 kilometers along the old railway line from Olvera. This is an ecotourism route that can be done on foot, bicycle, horseback, and even donkey! This permits hikers to contemplate exuberant nature, valuable plant and animal species and the most beautiful landscape. Cycles can easily be hired at Olvera.
hikeandbikeholidays.com  based near Ronda can also organise days out cycling in the sierras.

The ruins of this 32-hectare city are located at 1.000m above sea level. This was an urban area that thrived in the first century AD when it had a population of some 5.000. The city even minted its own money, which featured bunches of grapes. It has a fascinating well preserved amphitheatre and wonderful views. Just a short cross country drive away.

The beautiful, historic town of Ronda, with its impressive gorge, is only 25 minutes drive away. Take refreshment at a café table in one of the lively squares, marvel at the views from the famous bridge, stroll through the cobbled streets of the old town, or sit back and enjoy a horse-drawn carriage ride round the many places of interest. Ronda has something for everyone and is one of Spain's most beautiful towns.

Visit this fascinating village closeby, Setenil de Las Bodegas. Named after its once flourishing wineries - bodegas - Setenil is probably unique among the pueblos blancos, white villages, of Andalucia. Where most pueblos blancos were built on protective bluffs and pinnacles, this town grew out of a network of caves in the cliffs above the rio Trejo north-west of Ronda. Be amazed at the cool caves houses set into the rock, many now little cafes where you can sit and enjoy your surroundings.

The heart of the old Moorish town of Ronda is a delightful labyrinth of picturesque little streets littered with museums, such as the municipal museum in Palacio de Mondragón, churches, convents and noble residences. Stroll through the old town at sunset as the tourists leave and the Rondeños reclaim their city. This is the time when the real Ronda comes alive, with children playing in the plazas, families preparing their evening meal, and the sites and smells change completely.

Jerez, home of sherry and horses

The lovely city of Jerez is easily reached from Casa Acogedora, and is home to the sherry wineries and the Royal Equestrian School. Watch the amazing 'How The Andalucían Horses Dance' show and then pop along for a guided tour of a winery and, of course, the chance to sample the local tipple!

A gaita is a musical instrument you will find in El Gastor and hardly anywhere else. It is made from a cow's horn with a reed in one end, and was traditionally played by local youths as they sat around bonfires to keep warm in the winter months. If you can't find the real thing, there's a statue of one outside the town hall of this pretty village.