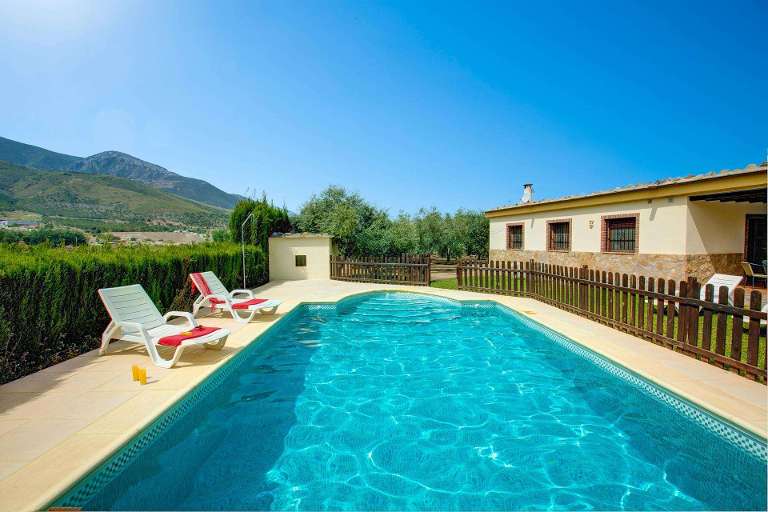 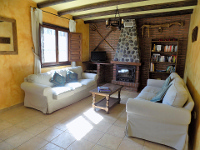 Nestling in the pretty Tíjola valley amongst fields of olive groves, with the imposing Sierra Nevada mountains behind and the rolling hills of the Sierra de Lújar in front, this charming cottage enjoys an idyllic location and forms a picturesque rural retreat for a couple or small group.

All around, the valley floor is populated with neatly ordered fields of fruit trees, across which the views are uninterrupted towards the surrounding hills and mountains that make this such a favoured area amongst trekking enthusiasts and nature lovers. With its well kept lawn and smartly tiled terraces, the pretty garden of Casa El Valle forms a pleasant and comfortable spot from which to soak up this vista, whilst parents supervising young children will appreciate the security provided by the fence that encloses the pool.

Inside, the accommodation is equally appealing, thanks to the warm hues of colour washed walls and matching fabrics that blend beautifully with exposed wooden beams and attractive furnishings. Whilst its setting is essentially rural, the house is nevertheless pleasingly close to amenities. A scenic drive of just 3.5 km along the country lane that wends its way through the valley brings you to the local town of Órgiva, which is home to a range of shops, restaurants and a colourful weekly market.

Alternatively you may wish to spend a day exploring the area's pretty mountain villages, head south to one of the beaches of the Costa Tropical (30 minutes) or soak up the historic sights of the Moorish city of Granada (55 minutes).

Great Things to Do Near Casa El Valle

Drive up the south face of the Sierra Nevada

to the 3 white villages perched above the Rio Poqueira - Pampaneira, Bubión and Capileira all declared to be of historical monumental interest. They are famous for the colourful textiles and pottery produced there and are not to be missed.

Shop for ceramics and textiles.

Colourful tiles, plates, jugs - the most traditional styles are green and blue adorned with birds, flowers or pomegranates (granadas). You'll find some of the best in the Alpujarran village of Pampaneira.

In the Alpujarras each village has its own dish – in Lanjarón garlic and ham soup, in Pampaneira stuffed peppers, Soportújar trout with ham, Capileira chestnut soup, Busquistar rabbit soup, and many more. And if that's not enough there's the tapas bars in Granada!

Visit the highest village in Spain,

Trevélez, where some of the best hams in the country are produced. Have some lunch while there - try locally caught trout cooked with ham - a real delicacy.

The Alhambra in Granada is the jewel of the city.

Formerly a palace, fortress and small city, it was once the residence of Arabic sultans during the 13th and 14th centuries. The gardens are amazing, with walkways, fountains and beautiful flowers. The complex is rightly now a UNESCO World Heritage Site.

Take a walk along Granada's Darro river to the gypsy area in Sacromonte. Gypsies have been living in caves here for over 600 years and they hold flamenco shows for the public in the caves.

Sit back and admire the views

from your garden over the Tijola valley where lemon and orange trees mingle with olive groves which are sometimes centuries old.

Get a tan and have fun

on the many and varied coves and beaches of the Costa Tropical - Almuñecar, La Herradura, Motril, Salobreña and Calahonda among others .

The white village of Salobreña

on the coast is topped by an imposing Arabic castle offering wonderful views and with outdoor shows in the summer months. This 'pueblo blanco' is a maze of cobbled alleyways with quaint houses bedecked with colourful flowers. After your visit, take the children snorkelling at the artificial reef which has been built down by the beach.

Situated in Maro just 3 kms outside Nerja near the coast, they have Palaeolithic wall paintings, stalactites and stalagmites and the world's widest column. Quite breathtaking, they are amongst the best caves in Europe. In Summer months there are music festivals held there including flamenco in July.

Throughout the summer, the Alpujarras and the Costa Tropical come alive with all types of music ranging from impromptu sessions of flamenco, the summer festivals in Nerja or the Alpujarra Traditional Music Festival in Orgiva.

Go to the theatre in the open air

and watch a play by the famous writer and playwright Federico Garcia Lorca in the atmospheric setting next to the gardens of the Generalife in the Alhambra. The plays start at 10 pm most nights except Sundays from mid June to end of August.

Not only a delightful collection of over 400 exotic plants, flowers and trees which is one of the largest in Europe, but also a venue for music concerts in summer particularly the 10 day long Festival of Jazz in July.

Take the children to Aquatropic in Almuñecar

all the usual fun of a water park with rapids and wave machines and plenty of exciting rides. There are green areas with shady trees and a children's lake for the little ones.

is an ancient spa town where you can still enjoy the hot springs which are open to the public all year and which have been channelled into baths since Roman times. The town was once the headquarters of the Spanish Inquisition and is set above a beautiful gorge. Stroll around the Moorish quarter which is easy to explore on foot.

Put on your walking shoes and take to the hills

joining the long-distance footpath the GR7 which passes through the pretty groves of orange and almond blossom in the Lecrin Valley, or up through the more challenging National Park of the Sierra Nevada. Best walking months are in Spring and Autumn.

Climb Mulhacen, the highest mountain on the Iberian peninsula! It's not too hard though - drive to the highest point then it's around a 6 hour hike to the top.

The nearby town of Lanjarón is the gateway to the Alpujarras

and is a spa town with baths dating back to Roman times. You can visit the Balneario for some relaxing treatments or try the excellent mineral water then wander round the old town which has typical Alpujarran architecture. In the evening visit the Arabic Castle and enjoy the views over the surrounding valley.

Visit the Tibetan Buddhist monastery and feel on top of the world!

O Sel Ling (which means clear light) is a place of serenity, with amazing views over the Sierra Nevada, Orgiva and the coast and the air is marvellous. You'll find it off the road to Trevelez from Orgiva. They welcome visitors from 3 -6 pm only.