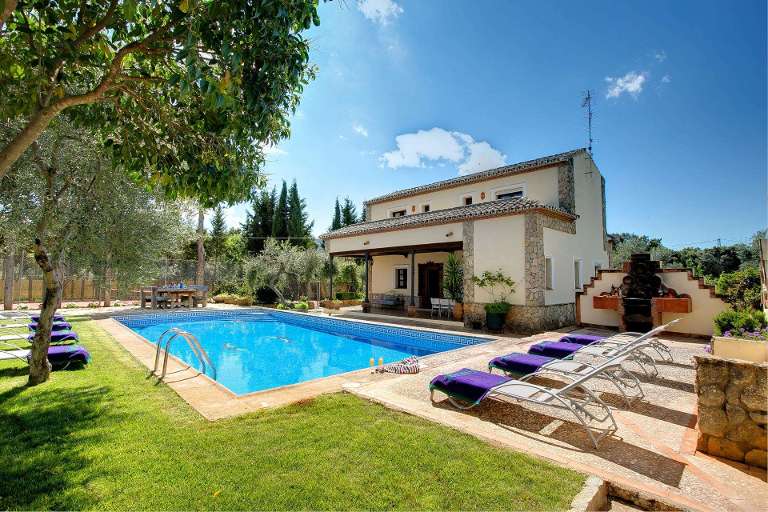 Hacienda Los Olivos enjoys a most enviable location. Set deep in the countryside yet only 10 minutes' drive from Ronda itself the property has been extensively renovated with great care and pride by a very thoughtful owner.

It is reached by an unmade country track winding through a landscape of mature holm oak trees and olive groves which surrounds the property. The spacious, mature gardens are home to a large private swimming pool, a tennis court and a lovely barbecue area alongside the pool.

Internally standards are just as high with quality fabrics and pretty hand painted local tiles used in the décor. The open plan living room flows conveniently through to a well equipped and cheerfully decorated kitchen.

Two twin bedrooms and a shower room complete the ground floor accommodation while upstairs there are two beautifully decorated bedrooms, one a double and one a twin, each with their own en suite bathroom. Both upstairs bedrooms open onto a sun terrace that runs the length of the house, from where there are superb panoramic views across the olive trees and the open countryside towards Ronda and the surrounding hills.

Please note:  When the small party rate is paid, two of the four bedrooms will be prepared.
Check Availability

Great Things to Do Near Hacienda Los Olivos

Ronda provides a very good base for the white villages of the Serranía de Ronda. The first visit could be to the nearby town of Arriate, famous for its pork products. The local ham, cured in this ideal mountain climate, is exported throughout Spain.

From Arriate, drive towards Setenil de las Bodegas. This is a spectacular village with houses built inside the mountain.

But Granada is not just the Alhambra, the city itself offers further delights: the ancient Albaicín quarter, the Royal Chapel adjoining the cathedral and many lively little squares, pulsating with energy.

Go for a stroll

Ronda retains its Spanish flavour in the evenings which is the best time for a walk along the gorge. The sunsets are beautiful.

Every Sunday morning there is busy market, not far from Hacienda Los Olivos. Go early for the best choice - you can find a good array of fresh fruit and vegetables, local cheeses and excellent olives!

Another area with lots of bars and off the tourist area is Plaza de San Francisco, in the old part of the town, by the old town walls. There are many bars there,try serranitos, a delicious small sandwich with ham, pepper and tomato.

Go to the Foot of the Gorge

You cannot leave Ronda without going down to the bottom of the gorge. Cross the gorge and drive along the narrow road until you come to the old walls of the town. Turn right, then right again at the bar called Bodega San Francisco. Now simply go downhill.

The Most Relaxing Way to Keep in Shape

Have a game of tennis in the evening and work up an appetite for a delicious supper on the terrace overlooking the pool.

Some excellent wines are produced by 'bodegas' in the Ronda area and some bodegas offer guided tours and wine tastings. Ronda also has a wine museum where you can sip a glass as you wander around the beautiful old building and discover the history of wine production in the region.

If you are a fan of classical music, or even just fancy a taste of some real Spanish music - Celia Morales is a classical Spanish guitarist who performs small and intimate concerts in her academy in Ronda.For anyone not exposed to Flamenco guitar, the performance was an eye-opening display of virtuosity, and the music was representative of the best of Flamenco -- full of passion and colour.

Explore the area on two wheels!

A local company offers cycling day trips with fully qualified British Cycling guides. There are a variety of different trips, from easy country rides to more difficult mountain climbs for more experienced cyclists. Contact Hike and Bike before your holiday to arrange dates with them. http://www.hikeandbikeholidays.com/cycling-spain/day-trips

surrounding Hacienda Los Olivos is a network of small lanes to stoll along and take in the views over to the Sierra de Grazalema.

Ronda celebrates its fair and festival in honour of Pedro Romero, the only fair in the world dedicated to a bullfighter, in September each year. “Rondeños” (locals of Ronda) and visitors alike can enjoy a whole week of fun and festivities. There are celebrations in the main town centre nearest to the bullring during the day. The main attraction being the “Corrida Goyesca”, a bullfight with the “toreros” wearing a traditional Goyesca style costumes based on the Spanish artist Goya. The first bullfight of this style was celebrated in 1954, on the 200th anniversary of the birth of the famous bullfighter from Ronda, Pedro Romero. There is also the large fairground on the outskirts of the town. Bullfighting is not the only thing to see, ladies dressed in traditional gypsy flamenco dresses and the beautiful horse and carriage parade on Sunday is unquestionably worth seeing. In 2018, the Feria will take place between 28th August and 2nd September.

A date not to be missed in Ronda, 'Ronda Romantica', 16th to 19th May 2019. The whole town centre comes alive with the Recreation of the Romantic Era. A genuine encounter with the legendary past of this land and its identity. There are parades, battles, markets and parties galore as everyone is dressed up as old age travelers, horsemen and Bandits of the Serrania de Ronda. For the old and the young it’s a great Festival in Ronda.

Buy some typical dulces, cakes from the nuns

The sisters in the convent at Ronda, are famous for baking special biscuits and cakes for Navidad, Christmas, which the enclosed order sells through a ‘turno’, or revolving hatch, in the door. There are pastries and cakes made all year too.
More about Andalucia