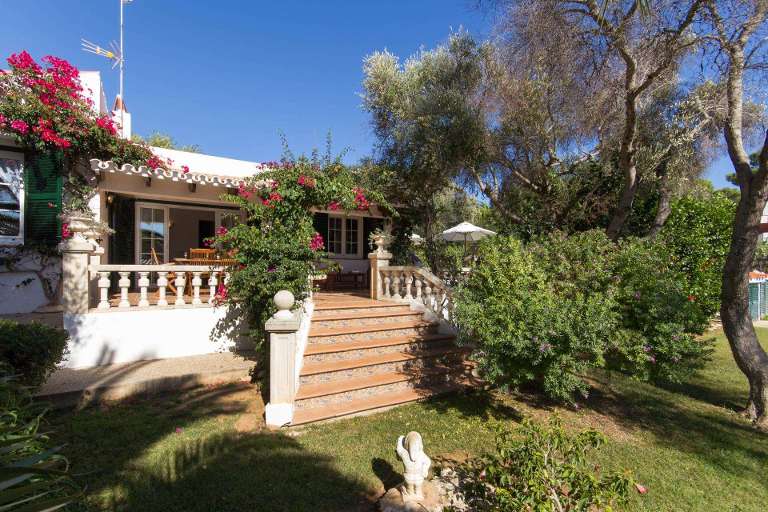 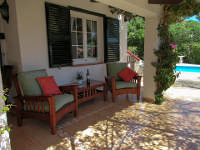 The prime location of this smart property means that it is just a 200 metre walk from the picturesque beach of Binibeca with its waterfront restaurant and fine golden sands. Add to this the appeal of the beautifully maintained and established lush Mediterranean garden within which the house sits, with its shady olive trees, various cacti and rich assembly of colourful flowering plants, and we are not surprised that Dar-es-Salaam has become a firm favourite with guests.

Inside, the light and well equipped accommodation is equally inviting, with the provision of both air conditioning and central heating ensuring that it remains comfortable at whatever time of the year.  Entry is via a covered terrace, which shelters the front of the house and leads the way to an open plan living space, where the dining room is on a higher level to the sitting room. This, together with high, sloping ceilings supported by crossbeams adds a feeling of loftiness.

A short stroll down the road, past other similar properties, brings you to the beach, its restaurant and then a nearby mini supermarket and pleasant seafront restaurants. With such amenities on the doorstep, you could be forgiven for not wishing to stray too far.  However, should you wish to explore the area, a short journey of just 6km to the north brings you to Maó where the waterfront restaurants that line the broad, deep natural harbour form the ideal location for sitting and watching the yachts coming and going.  For meals out, this picturesque south eastern corner of Menorca will not fail to impress, since it is home to many of the island's top restaurants.

Great Things to Do Near Dar-es-Salaam

For a curious mix of Menorca's indigenous species such as its emblematic red cow, pop along to this working farm/zoo in Alaior, Carretera General.

The unique leather goods on sale at Inaki Sampedro could potentially ruin your holiday budget! Try the accessories such as purses and mobile phone covers for something a little more gentle on your wallet. Or simply employ the expression: 'solo estoy mirando' (I'm just looking)! Situated at 26 Seminari, Ciutadella.

how about looking for bargains and antiques at the car boot sale in Mahon's Es Freginal park.

The parish church of Mahon, the Santa Maria,

houses one of the largest and finest organs in the world. Don't miss the chance to hear it being played, at one of the recitals held on every weekday morning at 11:00 o'clock.

Drive out to Es Grau,

a small fishing village on the north coast not far from Mahon. The sheltered sandy beach and the warm shallow sea are ideal for relaxing. The nearby nature trail winds around the back of the sand dunes, through the woods, and skirts part of the fresh water lake, the Albufera, which is a bird sanctuary.

For a change from the pool,

why not spend a morning at your local beach at Binibeca, and then stop for lunch at the beach bar ,Los Bucaneros.

Retrace your route to the house back as far as the Venta de Quesos Binibeca,

where authentic local cheese can be sampled and purchased.

Drive through the back lane to Biniparell,

to the Menorca cricket club - our own M.C.C.! There may be a chance to join in and play, or you could simply sit back and watch the game with a cool drink from the pavilion bar.

Stroll along to Binibeca Vell,

and see the Andalucian - style village, built in the 1970s as a hotel, and now a complex of private apartments. It won several design awards for the architect.

Drive down to Mahon harbourside,

and take a trip around the harbour on the glass bottomed boat. This is the second largest natural harbour in the world - Pearl Harbour is the largest. It is steeped in history, especially from the British occupation, and the boat often stops outside the harbour entrance to see the underwater life through the glass bottom.

Take a stroll along the length of Mahon harbour

with its fishing boats and modern pleasure yachts, perhaps stopping for coffee and a croissant at one of the many waterside cafes. Or go by night and have dinner - Il Porto 225 is a good choice of restaurant.

Spend a morning in Mahon at the Museo de Menorca

the museum of Menorca, which includes a video of the history from pre-history to modern times, as well as artefacts and objects, all well set out and described, and housed in the cloisters of a former monastery. Don't worry - it's all in English. Admission is free on Sundays, and for pensioners.

While in Mahon, make time to visit the covered market

in the cloisters of the church of Carmen. Many of the shops sell typical Menorcan produce, and in the café you can see photos of the market in its heyday, when it was Mahon's fruit and veg market. An escalator leads down to a supermarket beneath.

For a respite from shopping in Mahon

stop for coffee at the American Bar, and watch the world go by.

A few yards from the American Bar, in Calle Deya,

on the left as you look up hill you will see a small wall sign beside a covered entrance, saying Parc des Freginal. Go in here to find one of Mahon's best kept secrets - a green, shady park, away from the bustle of the town, where you can rest, or perhaps enjoy a picnic lunch.

The tradition of trotting races dates back almost 100 years in the Balearics and is not practised anywhere else in Spain. An afternoon at the races is a must for any lover of equestrain sports and it is very child friendly. The Maó Municipal Hippodrome, on the Maó-Sant Luis road, holds races on Saturdays from 17.30 (May to October). Grab a table, order yourself a drink and place your bets!

with a visit to Trepuco which is just off the road between Sant Lluis and Mao. Walk under the archways and explore the buidings that were once home to prehistoric man.

from Punta Prima to the headland Watch Tower at Alcaufar. It is the first part of Spain to see the sunrise.Once you get to the Watch Tower head down to the tiny inlet and have a refreshing dip before heading back.

and follow some of the clearly marked cycle routes that can be seen all over Menorca. Maps can be picked up from the Tourist offices and there are routes to suit all levels. The Cami d`en Kane is a great route to take by bike as this ancient and well preserved track meanders through the picturesque heartland of the Island.

Take a trip to Favaritx

where the landscape takes on a spectacular lunar quality. In contrast to the rugged coastline around the lighthouse, there are 2 beautiful beaches just a short walk along the coast heading south, Presili and Tortuga. These beaches are completely `uncontaminated` by tourist installations so you would need to take all supplies and equipment with you but this also means that the area does not get busy.