Villas in the Aveyron

Many of the highlights of this region are along or not far from the River Aveyron itself. Shortly before it joins the Viaur and becomes the Tarn, the river passes the bastide town of Najac with its distinctive castle on the ridge. Following the river due north, you reach Villefranche-de-Rouergue, a fascinating bastide with extensive amenities. Continuing upstream, the river bends eastwards and passes the beautiful village of Belcastel and on to Rodez, whose Gothic red sandstone cathedral towers over a well restored network of medieval streets lined with shops, restaurants and cafés.

In the south-east of the region lies the city of Millau, a major manufacturer of leather goods since medieval times and especially famous for making gloves, which you can learn about at the Millau Museum. Nowadays Millau is also famous for one of the most exceptional pieces of civil engineering in the world, its cable-stay bridge of monumental dimensions: 2460 metres long and 343 metres at its tallest point.

The Aveyron department can boast ten villages in the official ‘plus beaux villages’ list of picturesque French villages. A little detail about just three of these, that are close to our properties:

Najac perches precariously along a ridge above the Aveyron river, with a fairy tale castle at the highest point, surveying all who visit. From there, a line of ancient houses follows the ridge, culminating in the main square with its central fountain and numerous cafés and restaurants.

Belcastel is a picture-postcard village on the banks of the Aveyron. It is dominated by its 15th century château, which was restored from a ruin to its former glory in the late 1970s and is open daily to visitors. The village at the foot of the château is lovely to wander around, and don’t miss the elegant 13th century bridge, with its unusual feature of an altar half way across.

Approximately 250km long, the River Aveyron runs from east of Rodez through to Montauban, where it joins the Tarn River. The section around Najac and on towards Bruniquel is known as the ‘Gorges de l’Aveyron’ and is quite simply stunning. This part is particularly popular with those wanting to canoe, kayak and raft and there are plenty of companies offering this. The way this is usually done is to start at a point upstream in order to paddle down with the current, with a shuttle bus between the two points.

Villas in the Aveyron

Villages and Towns in the aveyron 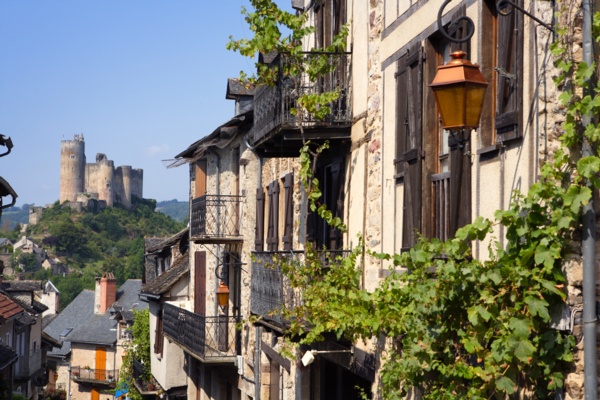 Designated one of the most beautiful villages in France, Najac's single street perches along a rocky ridge, high above the River Aveyron and overlooking the surrounding vista of densely forested hills. The main square, at the top end of the village, transforms into the market place on Sundays. From here, the road drops steeply past charming half-timbered houses with flagstone roofs. At the bottom of the hill sits the town hall, from where the road climbs sharply uphill to the well preserved remains of a medieval château whose striking profile can be seen from afar.

Villas In Najac More about Najac

Our Villas in the Aveyron