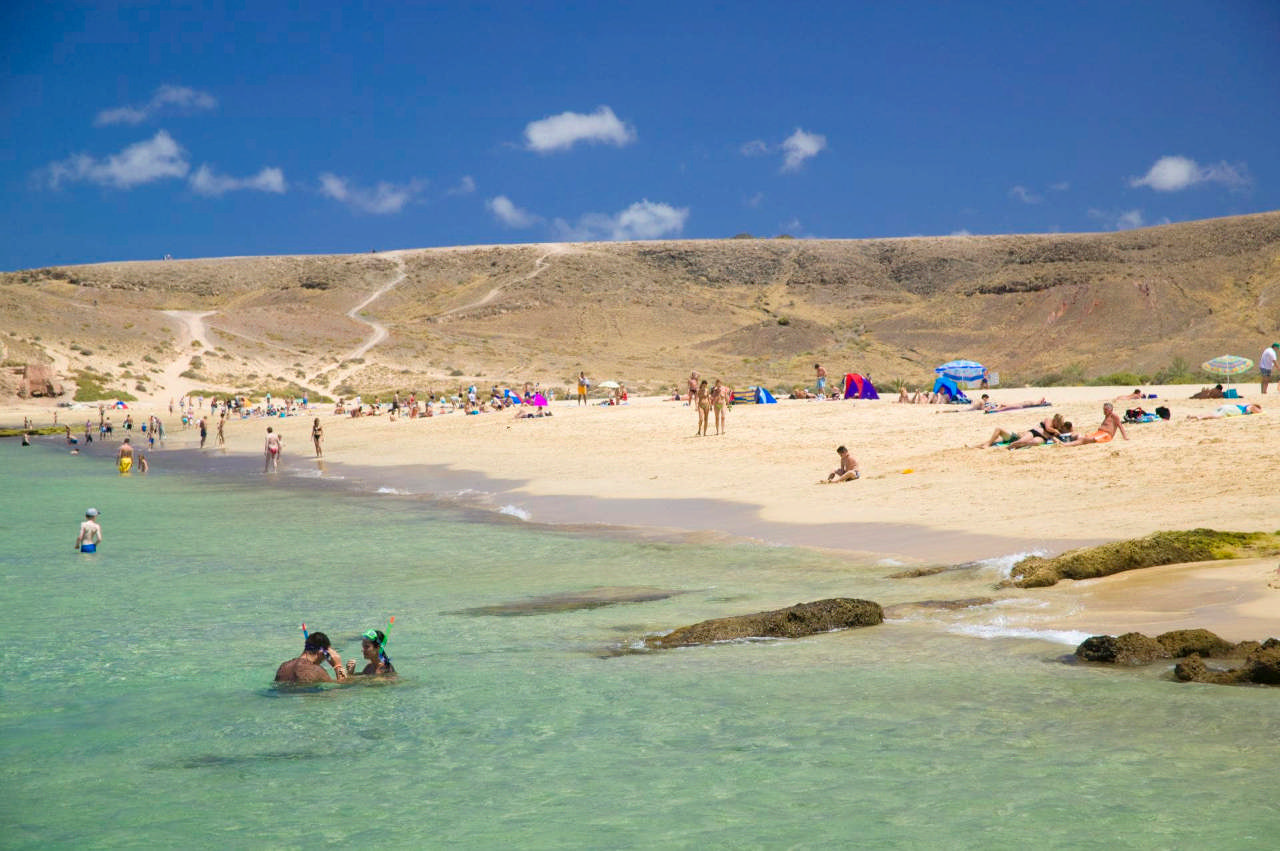 Over 40 years ago, showing commendable far-sightedness, the local government completely ruled out the idea of developing Lanzarote for mass tourism meaning that today over 40% of the land is officially protected. While clear pockets of tourism development most certainly exist, it is still the case that large tracts of hinterland as well as long stretches of the coast remain pleasingly devoid of any obvious tourist presence and it is in these unsullied and attractive spots that we have chosen to focus our hand-picked selection of properties.

The most influential figure (many say the key figure) in the movement to preserve Lanzarote's natural state and innate wonders was the celebrated local artist César Manrique and evidence of his pervasive influence can be seen all across the island. Testament to the enduring legacy of one of Spain's greatest 20th Century artists is a magnificent body of work comprising sculptures, murals, buildings, landscaped gardens and even a selection of large quirky mobiles.

Famously volcanic in origin, Lanzarote stretches 60km from north to south, is 25km wide and has a total coastline of 213km. A designated UNESCO Biosphere Reserve since 1993, it is home to one of the most dramatic landscapes on earth, the Timanfaya National Park, locally and accurately known as 'The Mountains of Fire'. Formed when a chain of now dormant volcanoes erupted in the 18th and 19th centuries, Timanfaya is one of only fourteen national parks in Spain and remains a part of the world completely frozen in time.

Resembling a sprawling pool of melted chocolate, the topography is in equal measure spectacular, eerie and stunningly beautiful having played a starring role over the years in many film and television productions including 'One Million Years BC', 'Journey to the Centre of the Earth' and 'Doctor Who'.

Alongside tourism it is agriculture that provides the main stay of the island's economy. Onions, potatoes and spinach are the chief crops and it is still not uncommon to see camels being used by the older generation of farmers to plough their land in traditional, time-honoured fashion (although these days they are mainly found carrying visitors through the national park - the camels that is, not the farmers!).

The arid La Geria region is a renowned centre of viticulture; a fact which to the casual observer may seem a surprise if not a contradiction in terms. How can vines grow in such a barren landscape? The answer lies in the ingenious way islanders have combined nature and know-how by constructing low semi-circular stone walls (zocos) out of volcanic rock within which the vines are planted 2-3m deep in porous lava granules. Protected from wind and drip fed water absorbed by the rocks from the night dew, the vines flourish, producing a respected Malvasia whose reputation stretches back even as far as Shakespeare who specifically mentions the wine in 'The Merry Wives of Windsor'.

Capital of the island until 1852 (when that honour passed to Arrecife), the sleepy demeanour of Teguise disguises a rich history. One of the oldest towns in the Canaries and the epitome of laid-back island life for six days a week, Teguise bursts into life only on Sunday mornings when a rambling market takes over the streets and bouts of exuberant folk dancing break out in front of the parish church.

Nearby Los Valles, equally somnolent yet no less appealing is the convenient location for one of our chosen properties. Heading south, La Asomada is a gentle rural community, full of pastoral charm and perfectly positioned for easy forays to the island's most notable attractions. The bright lights and vibrant nightlife of bustling Puerto del Carmen are also within easy distance - although you would never know it.

Regularly voted one of the prettiest villages in the Canaries, whitewashed Yaiza, together with its satellite settlement Las Breñas, is the gateway to some of the island's most notable beaches. Papagayo, the name given to Lanzarote's most southerly tip, has also become the assumed name for a series of remarkable coves of soft black and gold sand that border the peninsula. In contrast to nearby Playa Blanca, not an iota of development has ever been permitted here and strictly controlled access ensures Papagayo has been and is being kept in as virgin a condition as possible. It is a gorgeous spot.

Wonderful views of Timanfaya and La Geria can be enjoyed both on the way to and looking back from Tinajo, another typically relaxed village. Here the road forks; north leads to the impressive sporting centre of La Santa (a regular pre-season training camp for famous sporting individuals and teams); east brings Famara, one of the wildest and most dramatic, cliff backed sandy beaches in Spain, renowned as a world class location for all forms of surfing.

Flights to Lanzarote arrive at the Island's capital, Arrecife. There is a good choice of flights from a selection of UK regional airports. We do not tie you in to a package holiday with prearranged travel so you are free to choose flights from your closest airport using any charter, scheduled or low cost airline.

We always recommend booking your flights and hire car as soon as you have decided on your holiday accommodation. This will ensure that you find the lowest fares and a wider choice of flight times.

If you need to place a 'hold' on your chosen property whilst you are booking your flights we are more than happy to do this for you. We can book flights on your behalf if you would like us to, for this service we charge a fee of £30 for each return flight booked

Villages and towns in Lanzarote 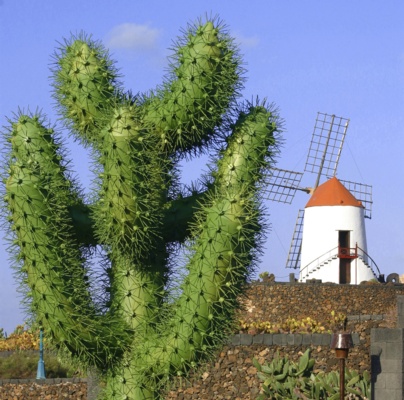 Off the beaten tourist track, Guatiza is a traditional Canarian village. This is a place where you will feel immersed in everyday life; wandering around the sleepy streets you'll hear men chatting over coffee in the social club and children laughing in the school playground. A pizzeria and a popular roast chicken takeaway offer good eating options within walking distance and the well-stocked supermarket opens 7 days a week. On the outskirts of the village lies El Jardín de Cactus, a large cactus garden designed by the island’s most famous son, Cesar Manrique. From Guatiza you have easy access to the historic capital of Teguise, the valley of 1000 palms in Haría and the beautiful, virgin sandy beaches just south of Órzola. 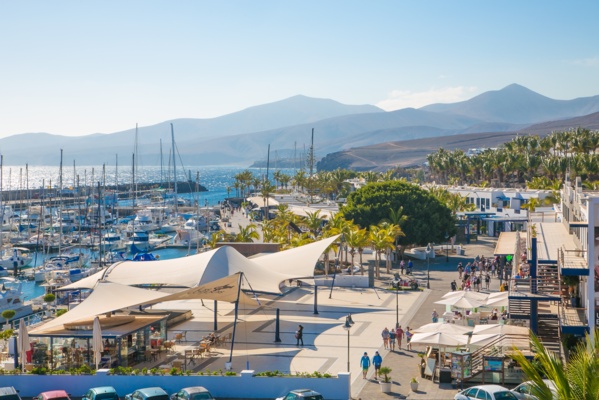 Puerto Calero is an oasis of peace and quiet on Lanzarote’s south coast. The marina has earned a reputation as one of the world’s top sailing destinations while retaining a characteristic village – type atmosphere in a naturally sheltered inlet. The landscaped gardens, modern design and tranquil setting makes for the perfect place to relax and enjoy time watching the world go by. The marina is home to an impressive selection of restaurants, designer shops and leisure facilities including sea fishing, scuba diving and sailing and is a convenient 15 minutes’ drive from the international airport. 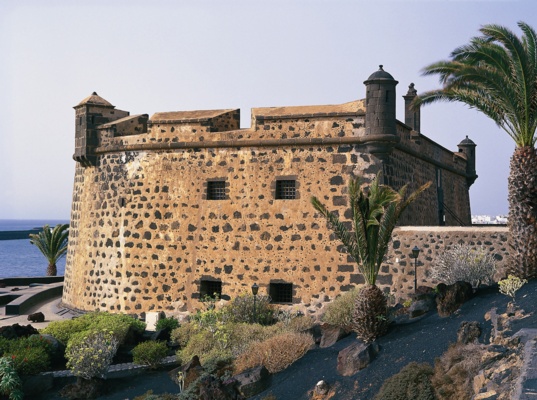 Tías is a buzzy working town just 10 minutes from the island’s capital Arrecife and the beaches around Puerto del Carmen. Conveniently situated in the centre of the island means that you are never more than a short drive from anywhere; whether that be the otherworldly lunar landscapes of the Timanfaya National Park, the intriguing La Geria wine growing region or the surfer’s paradise that is Famara.

Offering a wide range of bars and shops within walking distance, eating options in Tías are numerous and varied with everything from gastro-tapas to pizzas and grills and even an Arepera, a popular and friendly bar serving Colombian cuisine. You get a real taste for island life here and with everything you need close to hand as well as being ideally located to explore the island; Tías has it all.

Villas in Tias More about Tias 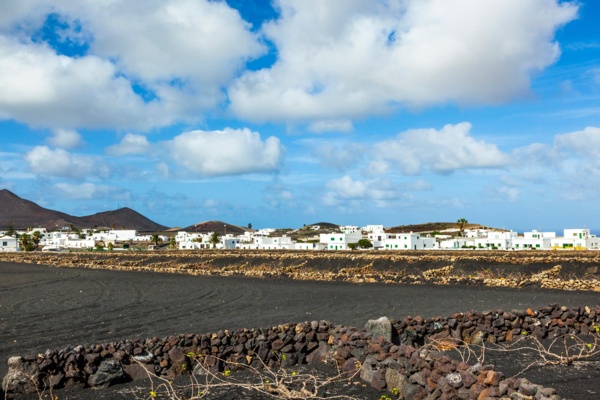 A quiet town with some impressive examples of Canarian architecture, Tinajo is centrally situated on the northern side of the island, just north of the Timanfaya National Park. Visitors to the park can enjoy a guided tour up and around the volcano in a jeep, tour bus or on the back of a camel! In the centre of Tinajo there is a supermarket, and various restaurants serving fresh fish and steak. The Sunday farmers’ market is popular and a good opportunity to stock up on locally sourced produce. The water sports centre of La Santa is just a short drive away, as is the surfers’ paradise of La Caleta Beach.

Villas in Tinajo More about Tinajo

Our Villas in Lanzarote