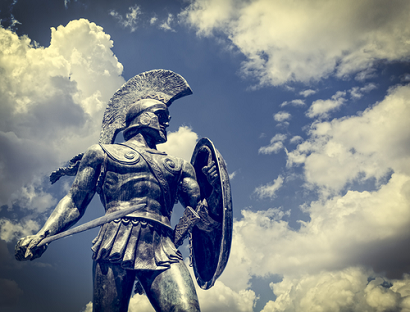 A history of Sparta: Peloponnese’s most historical spot

A history of Sparta… The name conjures up images of a military city state that was strong, hard and unwavering. Sparta was once a prominent city-state in Ancient Greece, situated on the banks of the River Eurotas in south east Peloponnese.

In its day, Sparta rivalled what Rome would become. A city state that politicians would wish to model their own countries on  2000 years later. Sparta was solid, unified and entirely dedicated to its own citizens.

Perhaps Sparta is most well known for its heroic battle against the Persians at Thermopylae. During the battle 300 Spartan warriors and 1000 other soldiers faced overwhelming numbers of Persian soldiers. The Persians suffered massive losses but  eventually defeated the Spartan-led army.

That battle took place over four centuries before Christ was born. It is the defeated 300 Spartans who are remembered to this day rather than the victorious Persians. Spartan boys were drafted into the army at seven years of age, so it is no wonder  that they became the world’s most disciplined and fearsome soldiers.

Spartan babies which were deemed feeble were tossed from the mountaintop. There was no room for the weak in pre-Christian Sparta.

Sparta and  was an amalgamation of five separate villages within the vicinity of the Eurotas River. Nowadays modern Sparta is built among the remains of this old civilisation. It has to be said, the excavations have failed to reveal any artefacts that truly demonstrates how revered Sparta is in antiquity.

The most eye-catching remain is a Roman theatre. It is said that the Romans admired the Spartans and  upon their occupation of Greece treated the Spartans with great respect.

Modern Sparta has some 35,000 inhabitants. You may gaze at the men and wonder if they would have been a good Spartan warrior 2,500 years ago. Sparta regularly records the hottest summer temperatures in Greece so if you have the pleasure of visiting this incredibly historical place, make sure you have your sun cream, sun hat and bottle of water.