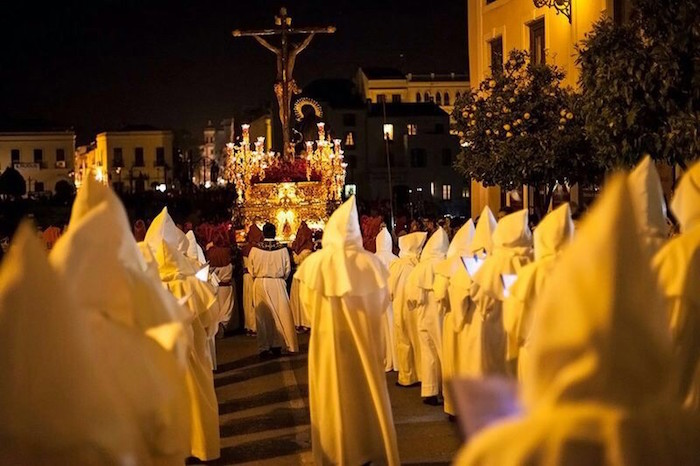 Easter in Andalucía is a heady mix of faith, pageantry and raw emotion. The dates for Holy Week 2016, known in Spain as Semana Santa, will be March 20th until March 27th. Easter is the deepest rooted and heartfelt celebration of the year right across Spain. Centuries of tradition encompass the passion involved with the death and resurrection of Jesus Christ. This fervour plays out in all the major cities, such as Seville, Malaga, Granada, Cordoba and Huelva, and also numerous smaller towns and villages. Millions gather and cram the streets in order to see the magical and very moving processions. 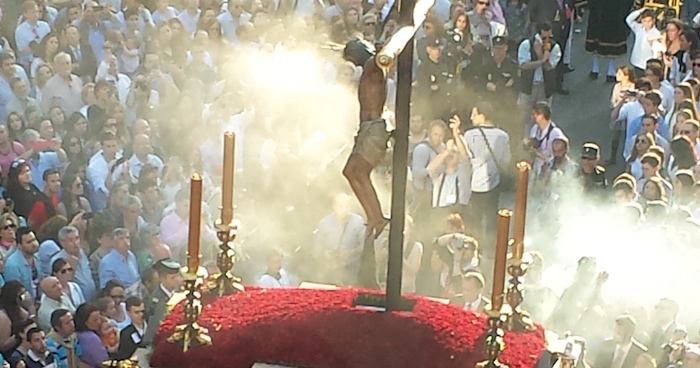 The Semana Santa processions include enormous ‘pasos’ (floats) which are carried through the streets by well-trained teams of ‘costaleros’ (bearers), and followed by hundreds of ‘nazarenos’ (penitents). The moods of individual processions change throughout the week. The most sombre ones are on Good Friday, when the crucification is depicted.

The floats are incredible works of religious art, often dating back three centuries and depicting parts of the Easter story. The streets will be packed three or four deep along the route of the processions, which can take many hours to complete. In Seville, over 50 brotherhoods (cofradías) have two floats each, though not all of the floats leave at the same time or necessarily follow the same route. Some of the costaleros carry the float each year, though this depends a lot on fitness. The activity seems to be male dominated, mainly because many of these floats weigh over 2,000Kg.

The Good Friday processions take place in the afternoon, late evening, at the stroke of midnight and some even after midnight, attracting enormous crowds to follow behind them.

In Malaga, brotherhoods meet and train all year around, partly as religious instruction, but also to enact acts of charity in the community. When it comes to the Easter parades each procession begins from the different houses of the cofradias, all over the centre of Malaga. These buildings are often recognisable because they have giant double story wooden doors, presumably high enough to get the religious icon floats out.

Each Confradias takes a different route, but they all converge eventually on the Plaza de la Constitucion and the Malaga Cathedral.  One common element of these processions in different cities is the multitude of hooded and robed figures that look a little like clan members. The idea is that as they are repenting these robed figures taking part in the processions can remain anonymous and that everyone is on the same level, not as an individual, but part of a collective. That way only God would know who is who.

In Granada 32 different Confradias participate in the processions. It is a unique spectacle to see them winding their way down through the Albayzin and Sacramonte hills, the old gypsy quarter, located on the slopes opposite the Alhambra Palace. On Holy Wednesday, it is the procession of the Christo de los Gitanos, where large bonfires are lit on the hillside. On Holy Thursday the processions become Christo de Silencio, the only sound being a beating of a drum to keep time. Good Friday is all change again, and it is the Soledad de San Jeronimo, in which the people dress up as historical figures from the Bible. Easter Sunday is the turn of the children carrying ceramic lanterns, which jingle as they walk.

Other smaller towns such as Ronda, which has fourteen processions, mostly crossing their famous and impressive gorge, and the likes of Vejer and Arcos, where the carriers need special training to circumnavigate the tight narrow lanes and corners, also celebrate as best as circumstances allow.

In Ronda a total of 14 processions take place over Semana Santa, the largest one being on Easter Sunday. These processions leave from inside one of the town’s many churches and walk slowly and sombrely around Ronda before returning to the church, often several hours later.

Bands typically accompany these moving processions, if not absolute silence.

If you only get the chance once to be present at one of these centres during Easter Week, you will remember it for a long time, it is like nothing else you will have witnessed in a parade. The very air crackles with emotion.