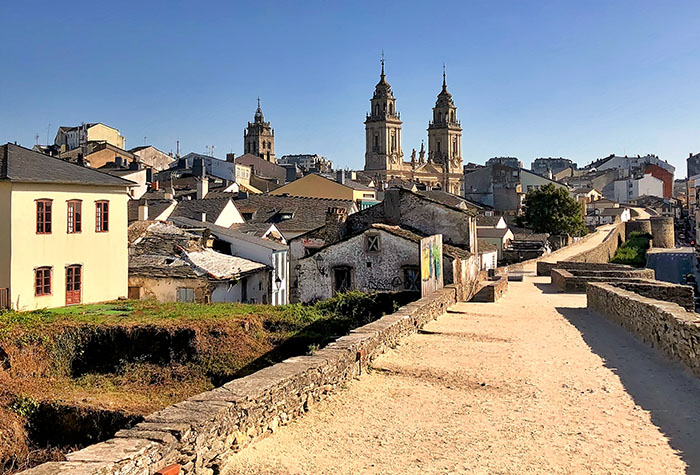 Discovering the Roman walls of Lugo

The great walls that surround the ancient city of Lugo in Galicia, North-West Spain are widely considered to be the best-preserved Roman walls, not just in Spain, or Europe for that matter, but in the world!

These mighty city walls were built in the latter part of the 3rd century to act as a defence from enemies attacking Lugo. Despite their domineering size and imposing grandeur, the mighty walls of Lugo failed to save the city being seized by the Suevi in 460 and later by the Muslims.

Today, the walls provide an exceptional example of the incredible engineering and architectural brilliance of the Romans.

Lugo’s great walls are built from huge slate and granite slabs. The walls extend an impressive 2117 metres and stand at a lofty height range of between 8 and 10 metres. The walls comprise of ten gates, five of which are originals, 85 external towers, four staircases and two ramps, which guide walkers to the top of the walls, which they can walk along and enjoy the fantastic views of Lugo below.

Lugo’s World Heritage Site-Listed Roman walls, which circle for 2.2km around the city’s Old Town, are used for everything from early morning jogs as the sun comes up, to evening strolls as the sun sets on this beguiling city, to the place for an invigorating bike ride or the perfect way to become accustomed with life in this ancient and fascinating Galician town.

Whichever way you decide to explore the Lugo’s ancient walls, call in at the Centro de Interpretacion de la Muralla, to the north of Lugo’s cathedral, to find out more about the history of these fascinating Roman walls.