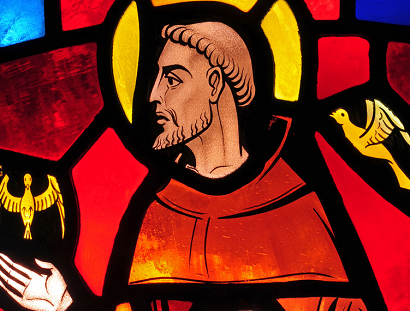 San Francisco of Assisi is thought of by many Italians as the number one revered person who has ever lived in Italy. And when you consider the Caesars, the popes, the artists, the opera singers and the football players, it is safe to say that competition is stiff. On October 4, the Umbrian town of Assisi has a festival to honour this loveable saint.

However, it is not just this medieval city, which was the birthplace of Saint Francisco, where they pay tribute the highly sacred saint.  In 2005 the Italian government declared this date a day of peace, brotherhood and dialogue between all people and religions. This October 4 the colours of Assisi – blue, red and gold – will drape the town, as they will throughout much of Italy.

Fiesta de San Francisco 2013 promises to be very special indeed. In the morning trumpeters in medieval dress will sound the anthem of Assisi in front of the town’s 14th century city hall. The ritual marks the start of the procession that leads to the tomb of St Francisco in the Basilica di San Francisco, which was built especially to bear his body.

Each year one of the twenty regions of Italy is elected to bring the oil to Assisi, which will burn all year in front of the Saint’s tomb. This year the honour has been given to the region of Molise and representatives of the area, including mayors and policemen. These respected officials will join the procession bearing banners of their own regional colours, which are red, green and white. Needless to say, the procession will endow a hugely colourful spectacle.

The following day, Assisi’s streets will be turned into an open market place and fair. Delicious local food and drink will be available in abundance as people gather at the many quirky stalls and families enjoy all the rides, games and attractions of this flamboyant fair.

Any visitor wishing to experience a great Italian festival will be hard pushed to find a better one than this event in Assisi, which honours their beloved Saint Francisco.