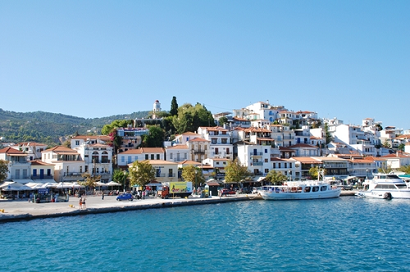 Millions of people worldwide loved the 2008 blockbuster movie, ‘Mamma Mia’. Many of the scenes of the popular movie were shot on the Greek Islands of Skopelos and Skiathos under the pretence that the story was set on a totally fictional island called Kalokairi.

In fact so popular was this big hit of a movie that some people deem it necessary to go on a ‘Mamma Mia’ pilgrimage, visiting as many Mamma Mia film locations as is possible. To stand in the footsteps of Meryl Streep and Pierce Brosnan and to drink in a bar where the great actors perhaps had a shot of ouzo or an Alpha beer is certainly an attraction of this unusual pilgrimage!

You might want to visit Kasteri Beach where many of the scenes were shot but don’t expect to see the jetty still standing. That was a temporary piece of “prop” engineering and has long gone along with the film crew.

The village of Damouchari in the Pelion area is a key spot to visit on Skopelos and this is where the film crew and entourage stayed. Many of the locals were extras in the film, which must have created some excitement, as well as improving their finances! In fact it is probably a good idea to ask the locals – with a few Greek words under your belt – some questions relating to the movie. Maybe you could find out which bars and restaurants the star-studded cast ate and drank in.

The initial influx of die-hard ‘Mama Mia’ pilgrims of the movie has faded slightly now but apparently 2009, the year following the film’s release, was a very busy time for the island. Although five years later the island is still confidently cashing in on their Hollywood connection and the ABBA-based musical tours show no sign of abating.

One of the best-selling ‘Mamma Mia’ tours is onboard the ‘Odyssey’ which visits many of the Mamma Mia film locations.  These popular walks and tours can be booked when on the island and for fans of the movie, retracing its footsteps has to be a must.