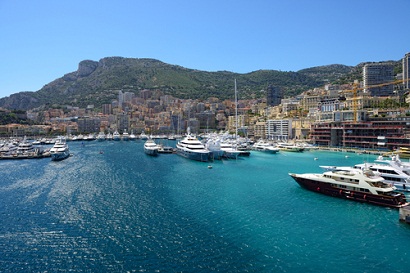 A star-studded tax haven – The more ‘obvious’ side to Monaco’s appeal. Being just 0.7 square miles in size, it is barely plausible that the tiny state of Monaco is actually considered to be a country.

Despite its minute size, there are more millionaires and billionaires in Monaco per square kilometre than anywhere else on the planet.

As residents of Monaco do not have to pay income tax, this tiny state on the French Riviera attracts a wealthy bunch of citizens, where similar to the archetypal misers of yesteryear who hid their cash in a stone pot buried in a secret place, the super rich in Monaco are able to place their money in banks that are highly protected by strict secrecy laws. Consequently star-studded Monaco is a fascinating little country.

The rise of Monaco’s Brits

British ex-pats who live in Monaco have risen in number three-fold during the last ten years and now make up 15% of the population. Although it is not the first time that the Brits have arrived in Monaco en-mass, as in the nineteenth century the Victorian aristocracy ventured here to try their luck on the gaming tables of Monte Carlo.

From tennis aces Boris Becker and Bjorn Borg, to Formula One sensations David Coulthard and Jenson Button, to pop legends Mick Hucknall, Ringo Starr and Dame Shirley Bassey, some of the biggest names in show business, sport and entertainment, are often seen gracing Monaco’s elegant streets with their presence.

Not known for mincing his words, American actor Jack Nicholson famously referred to Monaco as being, “Like Alcatraz for rich people!” As for David Coulthard and Jenson Button, the racing driving megastars reportedly fell in love with the tiny state after racing in the Monaco Grand Prix and being informed that they did not have to give a penny of their winnings to the tax man, providing they took up residence here!

Besides the monetary ‘convenience’ Monaco provides, no paparazzi are allowed here, which means the glitterati can lead a “fairly normal” life.

From Brigitte Bardot’s much-loved Saint Tropez to the world-renowned glamour and glitz of Cannes, if anywhere in the world conjured up connotations of wealth, lavishness and allurement, it’s the French Riviera.

The state of Monaco, which takes all of 38 seconds to fly over in a helicopter yet is home to 2,000 millionaires and 50 billionaires, takes the concept of aristocratic and celebrity hangouts to new heights – definitely worthy of a jaw-dropping celebrity-spotting visit!