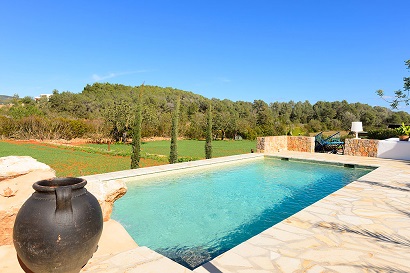 Atzi II is a popular luxury villa in San Carlos, an enviable part of Ibiza.  Enjoying the same lovely rural location as its sister villa Atzi I, with easy access to the coast and the amenities of San Carlos, Atzi II certainly boasts a well-appointed spot.

This almost Arabesque-style villa can sleep two guests but has the feel of a villa that could easily house four or five guests. Gazing across rolling hills of red soil interrupted by the greenery of trees and foliage, it’s safe to say Atzi II is in a tasty spot.

Whilst this flat-roofed house would not look out of place in some privileged suburb of Marrakesh, its interior distinctly Spanish décor kills off any Arabesque influence. Beautiful chunky beams adorn the ceilings, radiating strength and character. Terracotta floor tiles complement the beamed ceilings, augmenting the traditional Spanish character of the villa. Plump cushions on the sofa invite you to relax in front of the television or fire if the evenings get a tad chilly.  With its shiny terracotta tiles facing chunky wooden beams, Atzi II’s well-equipped kitchen still manages to retain a rustic look despite its many modern appliances.

This rustic charm is evidenced both inside and outside the villa. Take the old cart which is now left as a garden feature under the shade of a tree. You can imagine in bygone days the donkey pulling the cart to market, laden with freshly cut melons. The toil is over for the donkey and all that is left is a simple cart more or less the same as it would have been made many years ago.

Atzi II’s sparkling swimming pool is delightful with pencil-thin cypress trees lining one side. The surrounding natural stone terrace provides the perfect spot to lay your towel after a dip Though it has to be said, the outstanding poolside feature is a fantastic rock waterfall at the head of the pool. You can imagine the tranquillity and relaxation of listening to the mesmerizing and hypnotic sound of the glistening water gushing down the waterfall and into the sapphire pool. The pool is surrounded by lawns and a landscaped garden which only seem to end when the beholder’s eye reaches the last hill on the distant horizon.

Asides the show-piece pool, the garden has many other goodies on offer, including a quality outside kitchen and barbecue area equipped with a dining table. With an outdoor kitchen at your disposal,  there’s no need to keep running back and forth into the villa for those essential al fresco dining items, as everything that you need for a great night out on the terrace is here.

The vibrant town of San Carlos is only a five minutes drive from Atzi II. Scattered with fig, almond and carob trees and quaint ‘casas payesas’ (traditional houses), San Carlos is well worth a visit. The beauty and quaintness of the town is likely to have influenced San Carlos’ long-standing reputation as being a meeting point for the island’s bohemian residents and visitors. At San Carlo provisions for your holiday can be conveniently picked up. Likewise a refreshing drink and decent meal await you in one of the town’s many restaurants or bars.

For more information, photographs and to check availability and prices to stay at Atzi II, click HERE.