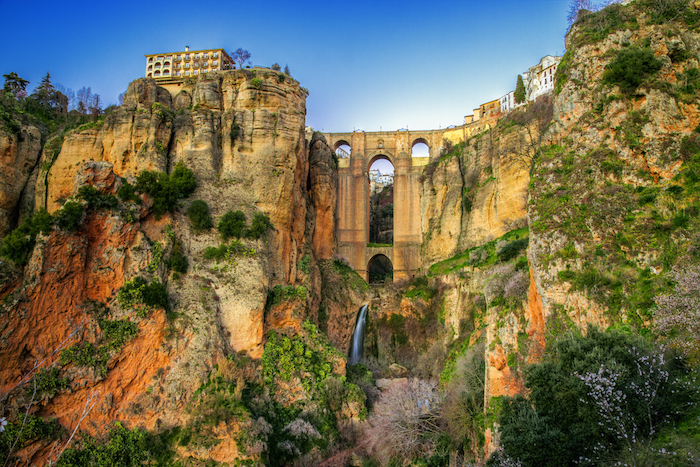 The beautiful sights of Ronda

Ronda can be found in the Sierras to the west of the province of Malaga. The drive from Algodonalesv to Ronda is considered to be one of the most beautiful drives to be found in Southern Spain. You have everything from mountains, river valleys and a large lake, to green fields carpeted with wild flowers in the spring, plus olive, orange and lemon groves.

White towns appear on the slopes, and the contrast with the green land and blue clear sky is breathtakingly beautiful. Nearby is the Parque Natural de la Sierra de Grazalema, in it you can find the Andalucían national tree, the Pinsapo.

Although this area is relatively unknown to tourists and you will need a car to explore, there is great opportunity for hiking and cycling if you are adventurous.

Ernest Hemingway wrote that Ronda was the most ideal town in Spain, stating:

“The entire town and as far as you can see in any direction is a romantic background”.

The one image that is synonymous with Ronda is the18th century bridge Puente Nuevo crossing the gorge. The ravine is about 100 metres deep, formed by the action of the Guadelevin River, which has in the past attempted to destroy it. This gorge is called “El Tajo”. There are also two other bridges, the old bridge which dates back to the Arabs during King Abomeliks reign and has since been restored twice after floods. The bridge of San Miguel also named the Roman Bridge was also restored.

Ronda stands on a high outcrop, which kept it safe from the Christian armies until almost the end of the re-conquest from the Moors.

Ronda’s Alameda Park has a lookout point where one can photograph panoramic views of the surrounding countryside. The park is very beautiful and is an ideal place to sit and rest under the trees and watch the fountains cascading.

The Palacio de Mondragon is another great sight in Ronda. The palace is big and one can view Moorish ceilings, doors, and windows, with incredible elaborate geometric designs.

Another top Ronda attraction is the Museo Lara, which is housed in the Casa Palacio de los Condes de la Conquista. The building is 18th century and houses the biggest private collection in Spain of items from the 19th century.

There are several other impressive houses open to the public such as the House of Saint John Bosco, with its nasrid tiles, and The House of the Moorish King with its own underground mine. Several interesting churches are also dotted around the town.

Stay at Ronda if you want impressive scenery, history, peace and quiet, and are willing to explore the area. There are good places to eat and enough bars to keep you hydrated.