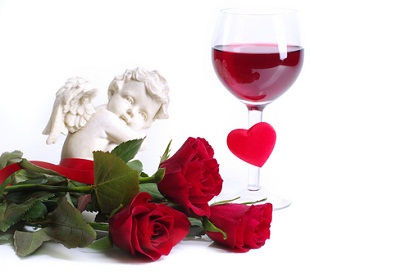 Rose wine ‘gratuitement’ amidst the most romantic of settings – Valentine’s Day in the Dordogne.

With the freak Indian summer firmly behind us and the possibility of ice and snow impending, thoughts of our 2012 holiday getaways are beginning to stew in our minds. Sooner in the year rather than later in the year is a favourable option for many British holidaymakers, who often find themselves depressed by the lingering British winter.

Mid-February can be a great time to escape those winter blues and go abroad, with Valentine’s Day being the perfect excuse! So you’ve decided on when to make your escape, the only question that now remains is where?

The Dordogne is possibly one of the most romantic places to spend Valentine’s Day. Not only does the many mighty rivers, lush and fertile valleys, medieval towns, grandiose gorges and abundance of twee chocolate and cake shops, bring out a romantic side in even the most prosaic of individual’s, but the region’s insistence in delivering a rose with every bottle of ‘Rosette’ ordered, is enough to rekindle a flame in even the most ‘stagnant’ of relationships.

For four consecutive years, one hundred restaurants in the Dordogne have been devoted to bringing romance to the area by giving couple’s a rose when the order a bottle of the locally-produced rose wine called ‘Rosette’.

Since 2007, ‘Operation Valentine’, has seen couples of all ages flock to the Dordogne on Valentine’s Day. The masses of vineyards that add an even greater diversity to the Dordogne’s exceptionally pretty landscapes have, in recent years, been dedicated to producing rose wine. In fact, sales of rose wine in France, have recently surpassed white wine sales, and there is a common accord that it is the small local vineyards of the Dordogne, which is producing the most sought-after rose.