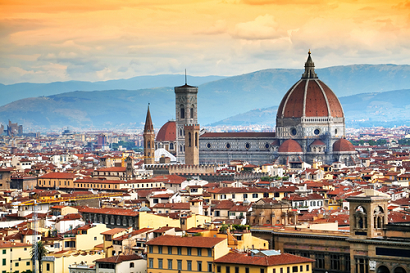 The Florence Festival of Paper Lanterns

The festival of Paper Lanterns takes place in Florence every year in early September and as you can imagine, is a particularly atmospheric event. While Florence is a lively and vibrant city all year round, the Paper Lantern Festival lights up this bustling Italian city with renewed vigour and life.

In fact if you are anywhere near Florence on September 7, and want to experience a cultural eye-opener, which is steeped in history and intrigue, then make sure the Fiesta Della Rificolona is part of your itinerary.

According to Christian tradition the Virgin Mary was born on September 8 in an unknown year, somewhere close to Nazareth. For centuries farmers would head into Florence to celebrate the birth of Mary and would bring along produce to sell to the city folk. Items such as cheeses, honey, fruit and vegetables would be typical of the goods for sale. The festival for Mary’s birth coincides with the ripening of the yearly harvest and since the 16th century local vegetables and fruit have been sold at the market.

From the 16th century onwards the farmers embarked on a long trip to Florence from their farms in the outlying countryside. They walked heavily laden with goods and were forced to set off in the dark in order to arrive in Florence at a reasonable hour. They carried lanterns on poles to light their way and this is the reason why elaborate and gaily-coloured paper lanterns are lit in their hundreds today. The fiesta is a celebration of the time when lanterns were actually very important as in bygone centuries the farmers wouldn’t have made it to Florence market without them!

The majority of these farmers were poor and were often ridiculed for their paucity by the upper-class, well-dressed city folk. Some of the farmers’ wives put on a thick gaudy make-up in an attempt to make themselves look more glamorous. The name “Rificolona” was given to the women wearing this heavy make-up.

If you do visit the festival don’t be surprised if you see Italian teenagers aiming spit wads at people’s lanterns. The idea is to knock the candle over inside the lantern and set the whole thing ablaze. By the end of the evening all of the lanterns will be burned out.

Taking in the marvellous sights of Florence during the daytime and then joining the Paper Lantern Festival later on, calling by at the market to buy some delicious homemade honey to take home will certainly aid some happy and memorable memoirs of a late-summer Italian holiday.