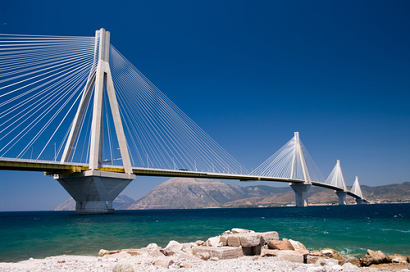 The bridge which crosses the Gulf of Corinth is a true marvel of the engineering world. Built on time and within budget, the Rio-Antirrio Bridge, that connects mainland Greece to the Peloponnesian Peninsula, is a rare feat in itself nowadays.

The bridge is second in size only to the one in southern France at Milau, although this statistic is contentious due to the fact that the cable-stays on the Milau Viaduct are assisted at one point by bearings, whereas the Greek bridge is supported purely by cable stays.

Although it’s not just its huge span and sheer length that has caused the Rio-Antirrio Bridge to be deemed as being a true marvel in the engineering world.

Asides overcoming the inevitable engineering problems of constructing a structure with such a huge span, Rio-Antirro engineers would have had an additional battle with water. The water in the Gulf of Corinth is extremely deep and therefore building the bridge’s foundations would have been an enormously difficult task.

The bridge is also built on an area of seismic activity and unusual steps were taken on the seabed to help overcome this problem. The foundations are constructed upon levelled gravel beds which are designed to absorb the shocks and earth movements. Also the Gulf of Corinth is on tectonic plates and each side moves apart from the other at a rate of 30 mm per year. The platform part of the bridge contains many dampers and shock absorbers so it will not fail in the event of an earthquake.

The Rio-Antirrio Bridge was opened in time for the Athens Olympics in 2004. As the torch- bearers ran along its entire length, the Rio-Antirrio was testament to the architectural and structural expertise of Greece.

The bridge remains for all of Greece and its visitors to use and will constantly remind the people of Greece what great things they are capable of achieving.