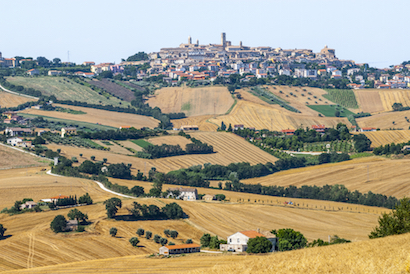 The old hilltop town of Macerata is an exceptional place to visit. From the outer edges of the town you can gaze over the undulating countryside, taking in some of the best views Le Marche has to offer. Though you wouldn’t want to stay gazing for too long, as Macerata’s interior is crying out to be explored and discovered.

Macerata contains one of the oldest universities in Europe, dating back to 1290. To this very day the town upholds a thriving student community. This vibrant student scene adds to the flavour and excitement of bustling Macerata.

Asides its ancient university, Macerata is perhaps most famous for its world-renowned opera festival, which takes place in the summer in Arena Sferisterio. This huge 7000-seat arena was built originally for Italian football. Arena Sferisterio is well worth visiting at any time of year, if not to merely witness a remarkable piece of neo-classical architecture.

As good as the Arena Sferisterio there are many sites you simply must stop at when meandering round Macerata’s quaint cobbled streets.  The Loggia Dei Mercanti is arguably even more spectacular than Arena Sferisterio. This two-tiered arcade is a thrilling sight and shows renaissance style architecture in all its glory. Being situated in the middle of the town in the Piazza Del Liberta, the Loggia Dei Mercanti is difficult to miss.

Another ‘must see’ site in Macerata is the Museo Palazzo Ricci. This 16th century museum houses a rich collection of Italian pop art of the 20th century. The work of many renowned futurists, including Giorgio De Chirico, Giacomo Balla and Renato Guttoso, is also on display at the Museo Palazzio Ricci.

Nestled in low-rise hills surrounded by unsurpassable scenery yet hording a vibrant student life and neo-classical masterpieces, if you are staying in Le Marche is it well worth the effort to visit the ancient town of Macerata.