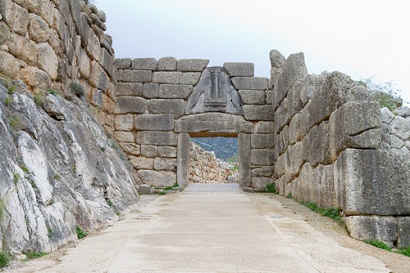 “The slight botanical variance is nothing compared to the bewildering variety of imposing ruins, situated in equally varied and beautiful scenery – massive mountains covered with low evergreen, oak and pines surround coastal valleys and loom above rocky shores and sandy beaches,” is Fodor Travel’s description of Peloponnese.

The region of Peloponnese in southern Greece invites visitors to witness ancient civilizations in the most stunning of surroundings.

We explore some of the best ancient sightseeing attractions in Peloponnese, this unspoilt region of Greece.

The ancient ruins of Mycenae have been described as being “one of the most distinguished archaeological sites in Greece.” This site is laden with significant ancient relics, such as a prehistoric acropolis with Cyclopean walls, tombs of the Atreides family and the tomb of King Agamemmnon. Although the most famous remain found at Mycenae is the golden Death Mask of King Agamemnon, which is now on display at the Archaeological Museum in Athens. This mythical Greek city became the setting for many a classic Greek tragedy.

For anyone who has visited the original location of the Olympic Games, they will be sure to tell you that the feeling of standing in the ancient stadium is somewhat overwhelming. The Ancient Olympia site includes an Olympia museum, which contains some of the most remarkable artefacts and sculptures from the ancient and legendary era. Not only in Ancient Olympia a history-lovers’ paradise, but, being surrounded by intense natural beauty, anyone with a love for utopic scenery will be enchanted by this mesmerising place.

Built in 1249 by William de Villehardouin, the remains of this Greek ghost town are as impressive as the panoramic views the castle on the top of a hill at the site, both of which are so spectacular it is hardly surprising that Mystras is a UNESCO World Heritage Site. Amongst the ancient cathedral, churches and palaces, nuns still live here, producing and selling beautiful and intricately-detailed embroidery.

And if you need somewhere to stay, Vintage Travel has some amazing luxury villas in Peloponnese, like the wonderful Petrino.