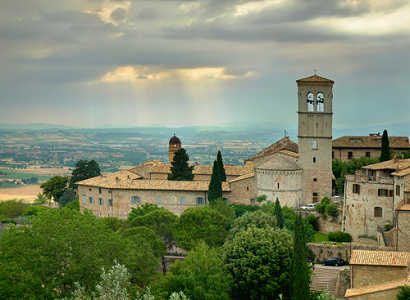 Assisi in Umbria – A place of theological contemplation and rapture. The medieval hilltop town of Assisi is one of the most visited places in Italy. Situated in Umbria next to Tuscany the town’s biggest attraction is its close links with St. Francis of Assisi and St. Clare.

Up to six million tourists and pilgrims can visit here in a year to become acquainted with the churches, castles and defensive walls that have barely changed much since medieval times. Here’s some top reasons to visit Assisi.

Although St Francis was born to a wealthy merchant, he embraced poverty and would walk around medieval Umbria, wearing shabby clothes that were barely more than rags, similar, one might say, to Ghandi. In 1204 St. Francis had a vision, to spurn the wealthy and improvident life and exchange it for the pious road.

One of the highlights of this intriguing Umbrian town is a little church called the Porzuincola, which was given to St Francis by Benedictine monks. St. Francis renovated this church with his bare hands. This historic church has been preserved exactly how it was all those centuries ago and it was in this very place that St. Francis founded “The Franciscans.”

The town does exude a certain holy mysticism and it is not difficult to understand why many visitors feel a special spirituality in Assisi. One particularly popular spot to stop and contemplate life and theology is the statue of St. Francis alongside two pet doves, which are symbolic of St. Francis’s love of nature and all living things.

Today it is possible to go on a tour of Assisi with a Franciscan monk, who will take you around and give you great insight into the way that St. Francis lived.

There is so much to tell about the beautiful teachings of St. Francis, of his appreciation of the world and all of the living creatures in it. Even in recent times various religious leaders refer to him, particularly when it comes to the subject of the environment. If you want to know more about this great man or indeed just want to visit a special place, then you simply must visit Umbria’s Assisi.