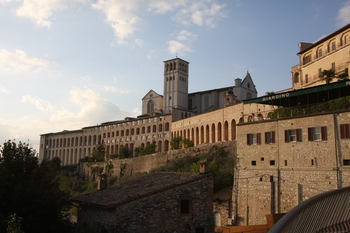 Visiting the Basilica of St. Francis of Assisi

Otherwise known as Basilica Papale di San Francesco in Italian, this is the mother church of the Roman Catholic Order amd the bitrthplace of St. Francis. It’s therefore one of the most important Christian pilgrimage in Italy and a recognised World Herritage Site since 2000.

The impressive Basilica Of St Francis

Construction started in 1228 on the side of a hill (known as The Hill Of Paradise) and today the church is in fact split into two churches – the upper and lower churches (plus the crypt where the Saint is buried).

The constructiuon site was actually donated to the Pope by Simone di Pucciarello, and was at the time known as the Hill Of Hell because of the executions that used to take place there. Obviously the name was quickly changed and all that helped build the church were granted an indulgence of 40 days out of purgatory.

The pope himself oversaw the planning of the church and on the 16th July 1228 the first stone was laid. Pope Innocent IV consecrated the churches in 1253 and the building was designated a Major Basilica in 1288. The impressive frescoes that decorate the interior today were painted by Cimabue, Giotto and others in the late 1200s and early 1300s.

In 1818, the tomb of St. Francis was rediscovered beneath the high altar, after lying hidden for almost 600 years. When the coffin was opened, Francis’ skeleton was found fully intact. A new crypt was then built around the burial place, first in a neo-Classical style, then in a simpler neo-Romanesque style. Thus modern pilgrims are able to approach the very tomb of St. Francis, which no medieval pilgrims were ever able to do.

We suggest taking at least ½ day to explore the Basilica if you inrtend to see everything.

Start at thelower church (basilica inferiore) and check out the papal High Altar under which St. Francis was buried. You’ll notice some incredible works of art, which depict St. Francis’ life in parallel with the life of Christ. The High Altar is a Cosmatesque work of about 1250, featuring lovely mosaic designs and delicate columns. It is topped by a marble slab that is believed to be from Constantinople. The choir stalls – 50 of them arranged in two tiers – were carved in 1471 and feature sculptures of leaves, animals and humans on the armrests.

Also known as the basilica superior, the upper church is a fantastic example of Italian Gothic architecture with an abundance of colour and life. Check out the elegant rose window, flanked by the symbols of the Four Evangelists, still contains traces of golden mosaic. You’ll also notice sculptures of mythical creatures decorate the horizontal mouldings of the facade.

The interior of the Upper Church

Cimabue painted the transept and apse in 1280-83 and Giotto painted the Legend of St. Francis in the lower register of the nave a few years later. The Giotto frescoes, which are based on stories of St. Francis recorded by St. Bonaventure, are what most art aficionados have traveled here to see.

The life story begins in the fourth bay of the north wall with the “Homage of a Simple Man,” and ends with the “Liberation of the Heretic Peter,” a miracle ascribed to St. Francis after his death. Giotto did not paint scenes 26-28 and some of the other scenes include work by his assistants.

Chapter House/Chapel of the Relics

A doorway in the right transept of the lower church opens into the 13th-century chapter house, which contains a 1340 Crucifixion by Puccio Capanna and a magnificent collection of relics associated with St. Francis. The chapel is frequently used for services, so unfortunately opening hours are limited.

Crypt with the Tomb of St. Francis

Halfway up the nave of the lower church, stairs on both sides descend to the crypt. After the tomb of St. Francis was rediscovered here in 1818, this crypt was carved out of the rock to allow visitors access. Be sure to look out for the altar and take in the ambiance. You’ll also notice that facing the tomb are the graves of four disciples of Francis – Fra Leone, Fra Masseo, Fra Rufino and Fra Angelo – who had previously been buried in the lower church.

The tomb of St Francis

Finally, be sure to check out the stunning views of the valley below from the Piazza Inferiore di San Francesco (lower plaza).

View of the Lower Plaza from the Upper Plaza