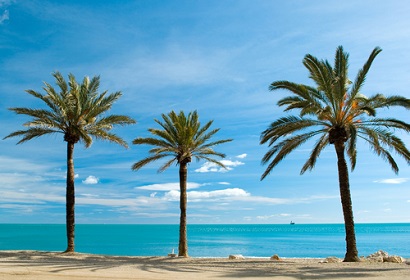 The Andalucian city of Malaga is the sixth largest city in Spain.  Due to its proximity to the southernmost tip of Europe, this cosmopolitan town is blessed with some of the mildest winters in the whole of Europe. Mild winters is however not the only reason to visit Malaga in winter.

The capital of the Costa del Sol is full of wonderful buildings, monuments and beaches and has a long and interesting history.

Malaga was founded around 800BC by the Phoenicians who looked for river estuaries, fertile land and plenty of trees for their furnaces when establishing a new trading post. Malaga fulfilled the Phoenician criteria and as a consequence the city was swallowed up by the old empire.

The Romans arrived in Malaga in 206 BC and ruled the city for 758 years. Byzantine rule followed from 552 AD but by 619 AD it was the turn of the Visigoths to rule the much sought-after city of Malaga.  Approximately a century later, the Moors took over and stayed in the Costa del Sol capital for roughly the same amount of time as the Romans had done. It was in 1487 when the Moors were finally ousted from Malaga when it came under the control of the Christians. For one city, that’s an awful lot of rulers of diverse religions and pays testament to the fabulously varied buildings, monuments and styles Malaga is home to.

It has to be said that Malaga Cathedral is one of the most beautiful cathedrals in the whole of Spain. Construction on the present day cathedral started in 1528 but in 1680 was part destroyed by an earthquake. Restoration work went on until 1783 when the cathedral was officially declared finished even though the money had run out and a tower was missing. The cathedral today is known as La Manguita (one armed woman) in reference to the right tower being missing.

La Manguita was originally built in the late Gothic style although because it took so long to build, the cathedral boasts a combination of styles with renaissance and Baroque building work added along the centuries.

This Moorish fortress is perhaps the best preserved citadel in Spain. The magnificent Alcazaba sits on a hill overlooking the whole of Malaga. The Moors built the fortress on top of an old Roman fort. Much of the fortress’s uniqueness and grandeur is owed to the 100 towers on its walls.

Today the Alcazaba is home to the city’s archaeological museum, which provides a truly fascinating family outing.  The breathtaking building is surrounded by beautiful gardens, fountains and palaces and it is hardly surprising that the Malaga Alcazaba was declared a national monument in 1931.

With many other inspiring sites such as the Castle of Gibralfaro, the Picasso Museum, who was born in Malaga in 1881, and the Museum of Glass and Crystal, which contains artefacts from Egyptian and Roman times, Malaga is certainly a Spanish city you can visit in the winter.