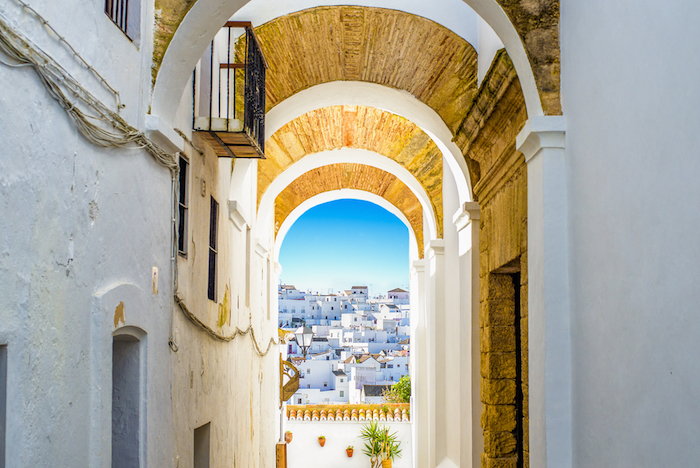 Sat at the zenith of a verdant hillside above the steep gorge of the River Barbate slightly inland from the beautiful shores of the Costa de la Luz – the Coast of Light -, the whitewashed town of Vejer de la Frontera is a sight to behold, before you even reach it.

If you consider yourself a Spanish culture and history enthusiast then we certainly recommend devoting some time to exploring and discovering this old Moorish hilltop town.

What is particularly prominent in Vejer de la Frontera – often referred to simply as Vejer – is that the old part of the town blends almost seamlessly with the new part.

Much of the wall that surrounds the old town has been retained, a feature that augments the authenticity and character of Vejer. As many of Vejer’s streets are too narrow for cars, a lot of the town is void of vehicles and caters solely for pedestrians.

With its ancient wall and winding, narrow, carless streets, it is noticeable from the outset that Vejer de la Frontera is a town that is steeped in history.

Vejer was used by the Phoenicians as a fortress town and later by the Romans. Following five centuries of Moorish rule, in 1218 Vejer was finally captured by King Ferdinand of Castille. Under King Ferdinand’s rule, Vejer became a border town to protect against the Moors and consequently the ‘de la Frontera’ was added to its name.

There are plenty of historical and cultural attractions on offer in Vejer de la Frontera. One unmissable attraction is the Moorish Castle, which is located in the old quarter. You can reach this classic 11th century castle by an archway which leads into a courtyard.

The Church of El Divino Salvador, which was built on the site where an old mosque once stood, is another must see site of Vejer for Spanish culture enthusiasts. As is the town’s main square, the Plaza de Espana, which is encircled with authentic Spanish cafes, bars and restaurants and shaded by huge palm trees. In the middle of the square is a pretty fountain adorned in traditional ceramic Andalusian frogs, spouting water into the air.

From spending the day meandering along the network of quaint cobbled streets popping into many a bar and boutique you’ll stumble across, to dedicating a day discovering the ancient sites, there is plenty to see and do in the castellated and well-preserved town of Vejer de la Frontera.