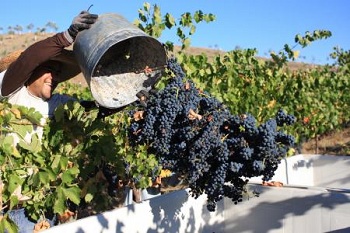 Work on the wine harvest on the French Riviera

Generally speaking one does not usually head for the south of France to put on the gardening gloves, pick up the pruning shears and kneel down in the dirt all day for some tough manual labour. On the contrary, during this time of year these hard to imagine scenarios are a common picture, as dozens of people gather at the vineyards of the French Riviera to chip in with the wine harvest proceedings, safe in the knowledge they are contributing to producing  some of the most best wines in the world.

The wine harvest in the south of France usually starts in mid-September and lasts until mid-October, although this year due to high amounts of rain and frost during the spring, the flowering of the vines were delayed, thus delaying the whole process. Although its good news, as because the wine harvest season here is starting slightly later this year, you are not too late if you want to join the flock of wine enthusiasts and mix backache, sweat and fatigue with camaraderie, festivities and of course some serious wine tasting.

Deciding which vineyard to mix business with pleasure and help harvest is difficult, as every winery in this exclusive and extremely picturesque region of France has its unique specificities and charm. History and tradition influences how the harvest in performed on each vineyard. On the isle of Saint-Honorat, for example, amongst the monks of the Abbey of Lerins, the whir of machines is never present as the monks pick their grapes by hand in silence. The grapes here are mollycoddled and treated with a similar pampering as a new born baby to ensure they will thrive on their route to producing only the most heavenly of wine.

Whilst in the vineyards of Saint-Paul and Bellet, a similar cosseted devotion to wine harvesting is executed by all harvesters. This almost spiritual loyalty in the picking of the grapes together with the exceptionally high quality soil found in these regions, allows for some of the finest stocks of chardonnay, pinot noir, braquet and clairette de Vence.

If you fancy yourself picking the grapes soaked by the last of the summer’s rays on the French Riviera, or anywhere else in France visit: www.kwintessential.co.uk